Let’s continue the weekly update of 16 Cygni : Strike Back here.

The week before the challenge was to set up a fight partially taking place on roofs of rjshae’s modern buildings. The challenge of the week was more on dialogs.
I decided that two side quests previously meant as independent would be much more interesting if interlinked with the main quest. Easy to say, not that easy to do. The journal was flexible enough, but some conversations had to be amended in order to ensure consistency.
Well, the result is not that bad. Some scripts spawning new instances of NPCs were required, quite fun to write. I should design the remaining 3 areas of the 8th module during the week-end.

I’m glad your adding to 16 Cygni such great Modules. Good luck on Strike Back Claudius33.

I took some time to watch the screenshots, and … waooouh ! Its a module that may make me play again NWN 2.

All areas of the 8th module have been designed, the quests implemented, a(nother) romance sequence as well.

I’m completing a few conversations lines including onlookers’ floating lines. I’m gonna run a full test of the module and fine tune the fights during the week-end. Maybe I’ll also start the first area of the conclusive 9th module. A challenging area onboard a space battlecruiser

hiding into an asteroids field, that I intend to design as an exterior using BCK II, Eberron and rjshae’s modern placeables.

The challenge of the week was a ‘fire and smoke battle’

with spawned allied reinforcements, which should be fun to play.

Go Claudius, A battlecruiser … a good music to my ears

The 8th module is fully completed, the conclusive 9th started.

However I got a severe cold that prevented me to do any modding after a day at work. Got to bed at 9;30pm three days in a row, which is totally unconceivable for me.
Anyway I started the challenge of the week, the battlecruiser area. Still unfinished, missing placed effects, lights, crew, but beginning to look like something. I updated the gallery with a couple of unfinished snapshots. I also wrote some more companions lines. 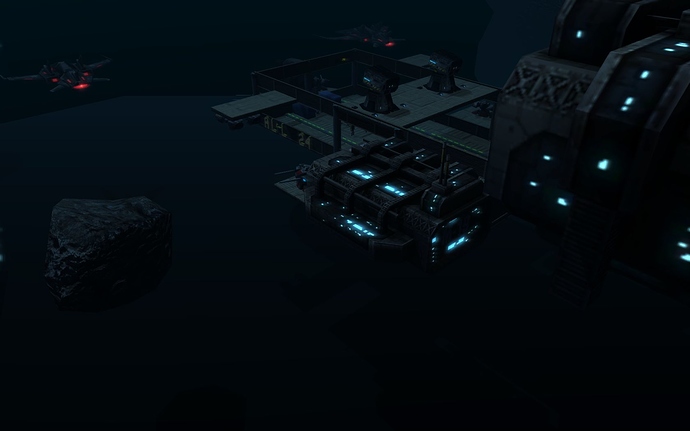 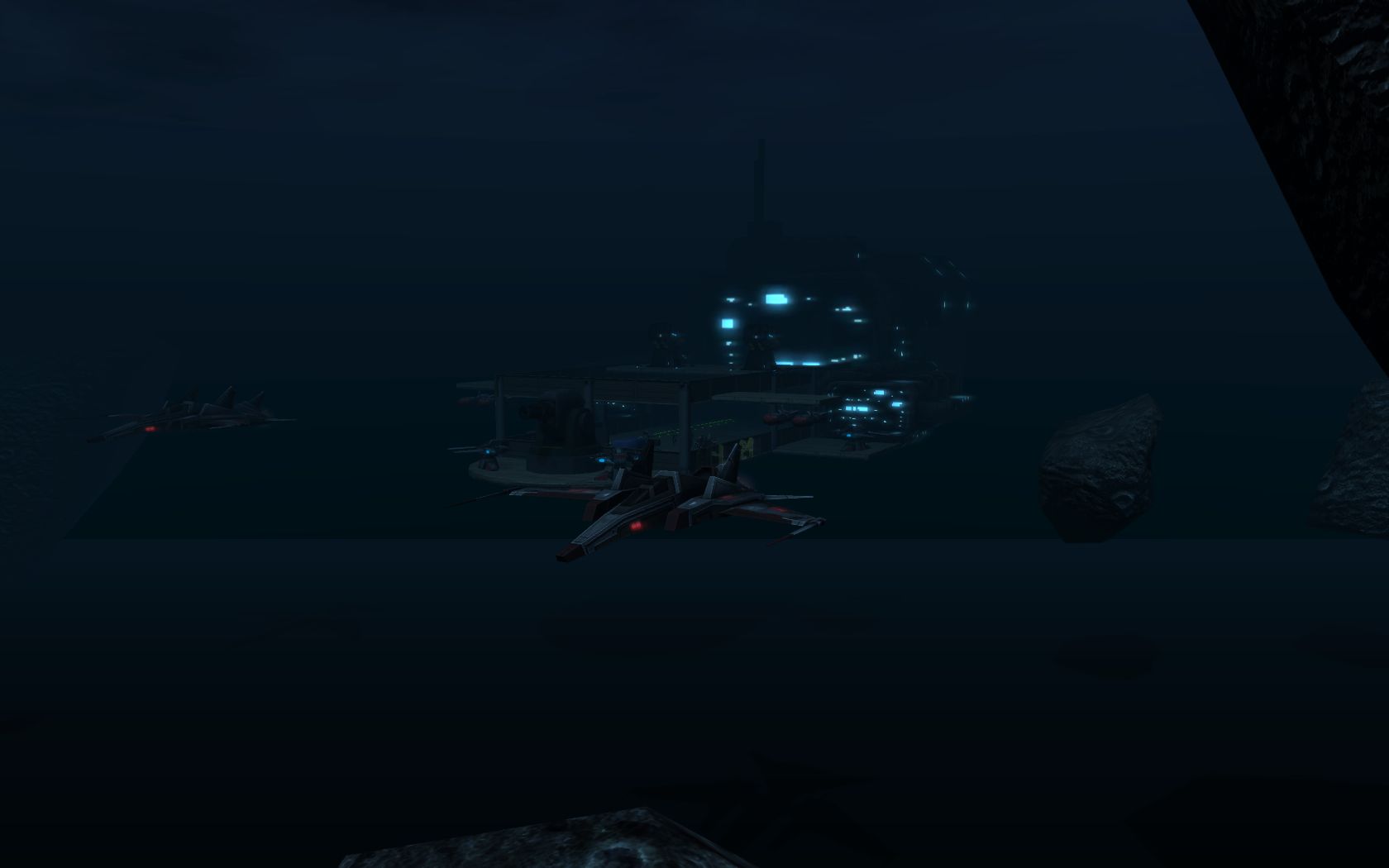 Does the Battle Cruiser launch it’s own fighters and are those what where seeing in front of it. If that is what there for they look like their for attack and defense. Also they look like they can be used for planetary attack. Very, very nice touch.

Yes the battle cruiser has its own fighters. You can see two of them in close range combat air patrol. More details are provided in game about the ins and outs, the capacities of the combat group, the armament, etc …, I’m currently writing the corresponding convos. Expect no spoiler about the current mission though

Here is a static camera view from a conversation:

This is amazing looking. This is going to be epic I can tell. Good luck with Strike Back.

The battle cruiser area and the onboard conversations including a ‘guided tour’ are done. Quite a lot of writing (and translation

) this week especially companions lines. They have a lot say

Thanks guys. I designed areas and wrote two conversations this week. If things go well, I should have completed about 45% to 50% of the conclusive 9th module by end of the week-end.

Challenge of the week to come : start revealing the main plot and putting all pieces of the puzzle together consistently.

BTW does someone know if and how a placeable can cast a spell by script? I usually use a creature to cast the spell, for instance a catapult seems to fire but actually a nearby magician casts the spell. I’d like not to use a creature this time.

BTW does someone know if and how a placeable can cast a spell by script? I usually use a creature to cast the spell, for instance a catapult seems to fire but actually a nearby magician casts the spell. I’d like not to use a creature this time.

(must non-static, has hp, etc)

the downside is that caster-level will default to 10 (unless using a custom spellscript that calculates its own caster-level).

and in rare cases things might go a bit south (eg, if trying to cast a persistent AoE…)

Thanks for the tip, Kevl_s.

Iirc rjshae made a catapult as a creature complete with launches and stuff.

Thanks Kamal. I’ll try kevL_s’ way first. Actually I have one of rjshae’s modern placeable in mind.