I have a need for a couple of things. One is help with a scripting problem the other a problem I have with the conversation editor.

Given that a recent patch means that you can edit parts of a module separately from the toolset I was wondering if there is such a thing as a standalone conversation editor for NwN? I have a bug that BD have so far not been able to replicate that makes the built in conversation editor unusable for me. So, apart from using the 1.69 editor and exporting the result as an erf, is there an external editor I can use? I half remember talk of such a thing a long time ago but I could be wrong and if I am right I can’t remember what it was called anyway. This is for one module I am working on.

The scripting thing I need help with is for a different module. All I want to do is create a floating beam effect that I can ideally specify the start and end of. By floating I mean not attached to either an NPC or PC. I know that this can be done because gaoneng did it for their excellent [ P&SC ] Pentagrams & Summoning Circles v1.45 : real-time 3D geometry project. The trouble is while I’ve searched through the code of that project, I can’t for the life of me work out how it was actually done. So help here would be appreciated.

Thanks for any help.

Is the bug related to dragged/pasted nodes showing up in the wrong place? If so, I have that too. But I’ve had it for years, and I remember that I fixed it at one point, I think with a game setting change. I can’t remember what it was, but given that it’s annoying me right now I’m about to look for it again. If that’s your issue I’ll post once I’ve worked it out again (or perhaps someone else who does remember will ninja me. :)).

Regarding the beam effect, I think I did this in Sanctum 1 with the ancient power units. I’ll check and if I see a solution there I’ll follow up.

OK, on the Beam effect: If there’s a way to get around having to specify two objects to serve as anchor points for the beam, I don’t know it. But they can be arbitrary objects. Neither has to be a PC or an NPC, which sounds like it fits your criteria. I do just that to generate the lightning beam effects from the ancient power generators in the Master Control Room in Sanctum 1. If you have the mod you can find the code in the script sa_mc_init. Here’s the outline:

If I’m remembering correctly the trick was using BODY_NODE_HAND, which works more or less by default for objects that lack a meaningful body part.

Let me know if this helps!

Is the bug related to dragged/pasted nodes showing up in the wrong place?

Unfortunately no. I made a 30 second webm (< 4mb) video of what happens when I click the mouse button in order to select or edit nodes. I sent this little video in with my bug report. I have put on DropBox for this reply (because YouTube would have shown my real name). One minor oddity is that even though they apparently share some functioality, I don’t have the same problem with the journal editor. FWIW that first cut conversation really needs editing.

As far as the beam thing goes, I have been told that gaoneng used invisible placables to achieve things like this 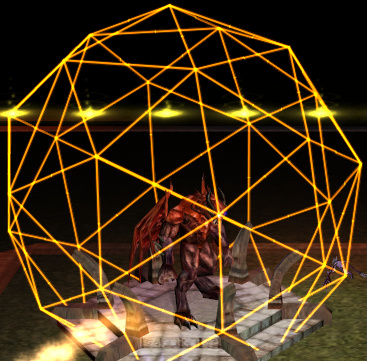 Thanks for your help. I’ll have to look into it.

Invisible placeables are the way to go. You just edit their z-axis in the tool set or spawn them in mid-air at the desired height.

Slight spoiler - for example, you might remember in Dark Energy you can tie a rope to a winch to raise a heavy coffin lid. The rope’s path is a beam effect from placeable to placeable. (I had to mod the chain effect to look like a rope because we can’t add new beam fx in SP).

Right. Don’t try to left click/drag place the floating placeables in the toolset. Use right click (or select them in the resource list) and use adjust location to set their Z coordinate. If you’re looking to create a regular pattern (like in the image) then the math is probably easier to work out in a spawn script than doing it by hand.