A Poster with a man in a Top Hat points his finger at you!

A poster with a man in a Top hat points his finger at you “I Want You!” to have a look at my Showcase of some of my on-going Steampunk World: Project Midland, a steampunk Fantasy World for Enhanced Edition.

Below are some of the newest areas ive developed after nearly 3 1/2 years of working solo. Images are as followed: Supply Depot for sneaking characters (here players can infiltrate an off limits area and risk getting caught for prized treasure!), and Wall market the entertainment district of the Local City.

If you’d like to see what I have done, or will be doing, you can always go to my project page here: Midland, Steampunk Fantasy Server 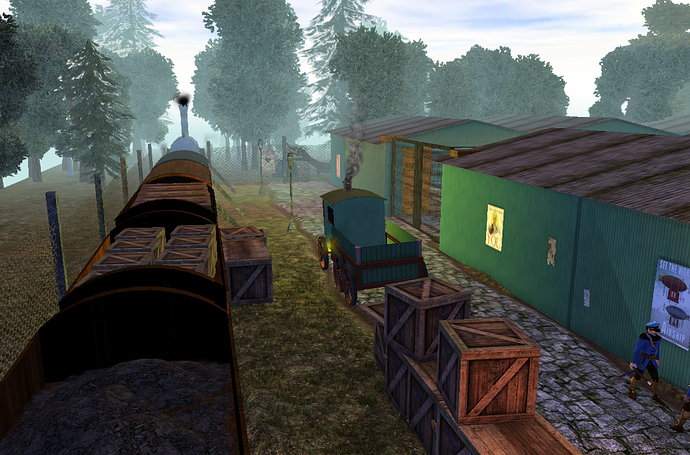 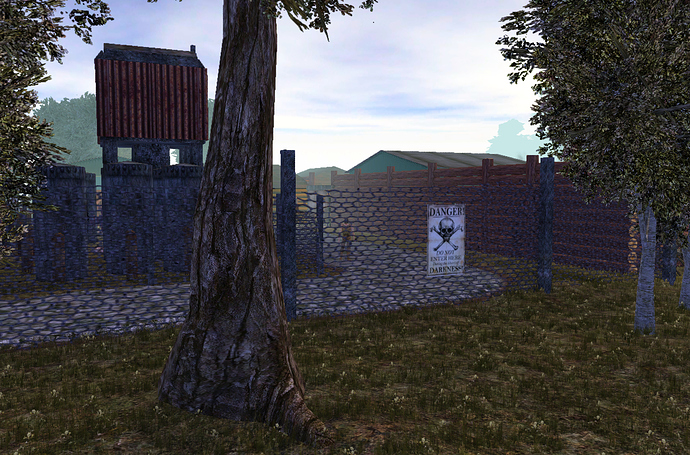 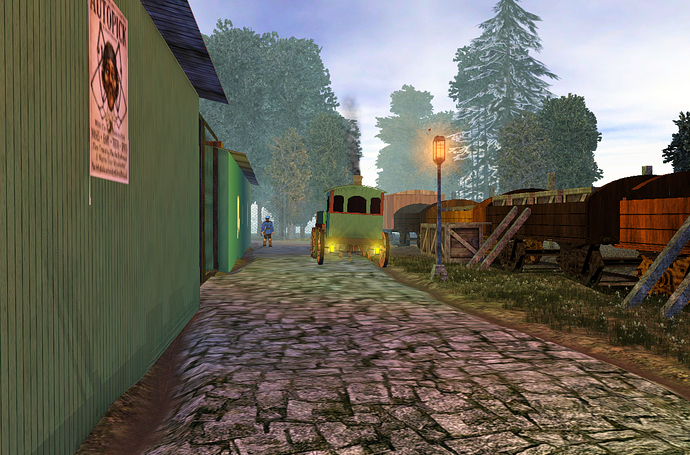 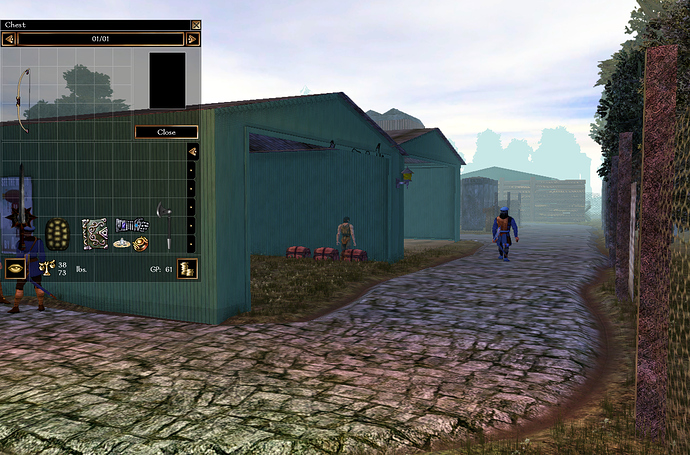 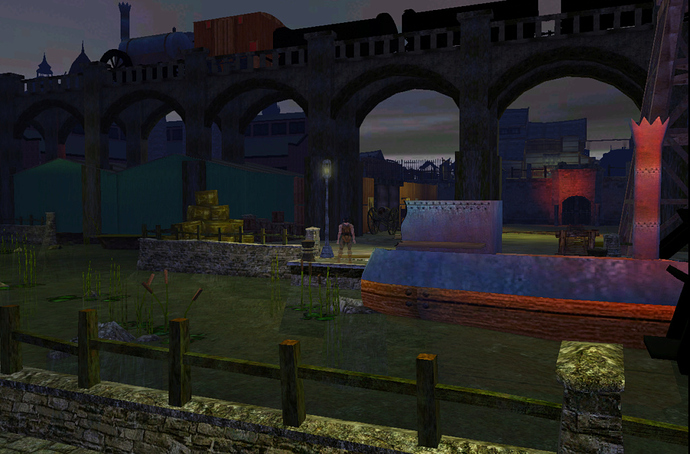 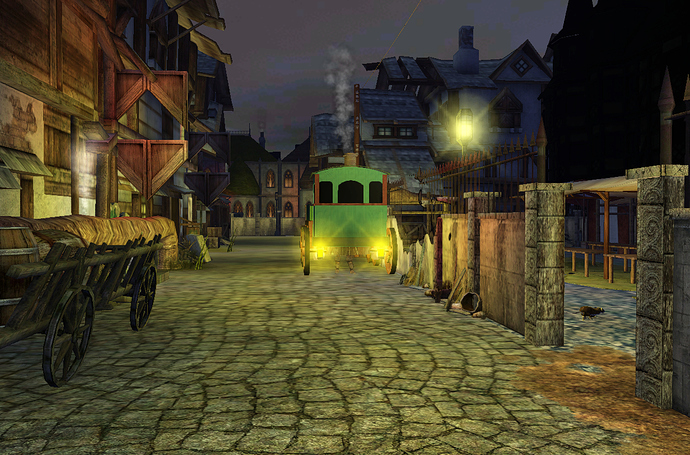 I posted this over on some various groups and someone pointed out the idea of how implausible something such as Longbows, and axes would be in a steampunk universe. It certainly is a good idea to point out, and might worry some people as to the direction of this game project as a whole or perhaps consider how it could be done.

I have addressed this on my blog as a world building discussion and the premise of this is the steampunk part of the world is merely a Doctrine, organized by Governments, kings, queens, religious orders, the common people, etc. That being the basic idea, but the long version is much more complex than that. Many cultures exist in this world from Elves to dwarves to Halflings Gnomes and Humans each drawn to their own social order and unique lives.

I’ll leave it at that, but perhaps that might answer some peoples questions they may have, or just have a look here: https://midland-steampunk.forumotion.com/t1p25-server-blog#114

y, just put a little smokestack on it  :)

Thats certainly true! Technomancy is a good alternate to steampunk and fantasy. a universe where technology still uses medieval technology. Spelljammer is another one as well. certainly Ideas ive considered here.

So in a reasonable way, ive stated on my blog that it doesnt really matter, but for those who might be interested its an interesting topic to go over. Magic i still think can trump conventional weapons and its quite prevalent here. its an rpg so you’ll need your sense of progress and ways to buff yourself, so i feel ive done pretty good at balancing these two.

@kevL_s i completely agree, slap a smokestack on it and call it a day! 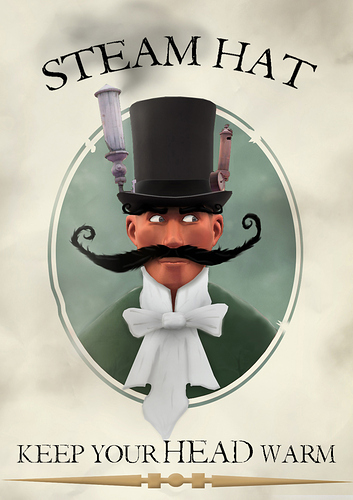 Honestly, as long as axes are used as tools (for chopping wood and breaking down doors in burning buildings, etc.) there are those who will use them as weapons and there are even more who will use them as improvised weapons.
Another thing to consider is economy, which is especially relevant in the case of bows.
Not everyone can afford a pistol. But you can make a longbow and some arrows yourself (especially if you already have an axe.)
I once saw a discussion on a forum regarding (I think) Baldur’s Gate, where someone was arguing that daggers needed to be balanced so they were as powerful as other weapons.
What this person failed to realize is that a plausible world is balanced around NPCs, not PCs.
That is to say, a lot of people have never seen a gold piece in their life and a dagger or dirk might be all they can afford.
Thieves don’t use daggers because they’re dagger experts, they use them for the same reason they’re thieves to begin with: they’re poor.
So I say bring on the bows, the wood (or bone) armor and the copper coins.
I’m a big fan of Arcanum and your module looks quite interesting.

Been a fan of the stuff you’re working on since the original shots, struth, like, two years ago? Eager to see it when its all released (Though, ever-eager for those trains just because, trains.)

That’s such a great point to throw out there. NPC’s really do help make the world you’re in. Midland is suppose to be a place where there is a gap between Magic and the literal mechanical Cities that help shape a growing economy yet still use the two without ever realizing it sometimes (an example: Yoana is the Dwarven smithy in the starting town. She uses an ancient Runic Hammer that was made by her Great Great Grandfather. She doesnt understand the hammer, but she knows what it can do) There are even races that are a balance of Magic and tinkerers around here too.

I certainly like to think i did a good job at this and i might say alot of what i do comes from experience playing on other server’s online (What Do i like to see in a server?) or inspiration’s from games like Witcher, or Fable, where Magic is usually limited to Elites (In this case magic is conditioned or taught in schools, then orchestrated for political agendas) but wont keep everyone from practicing it becoming Heretics and Witches.

I definitely look forward to full steam ahead on this project and always finding ways to express my thought process of the world as a whole.

Im glad you’re such a fan of the work man, It helps keep me going and knowing that one day I’ll get this server stuff going (I decided to start my own personal server, so setting that up will take some time while juggling the project, while juggling other peoples requests I do for fun, while go to my job)

While i’m at it, heres some thing I think alot of people will like just based on the concept alone: NPC Weapons of War. The idea here was simple, eliminate scripted Siege Equipment with Level based NPC Creatures.

These are some of the very early pictures of the two i did first. 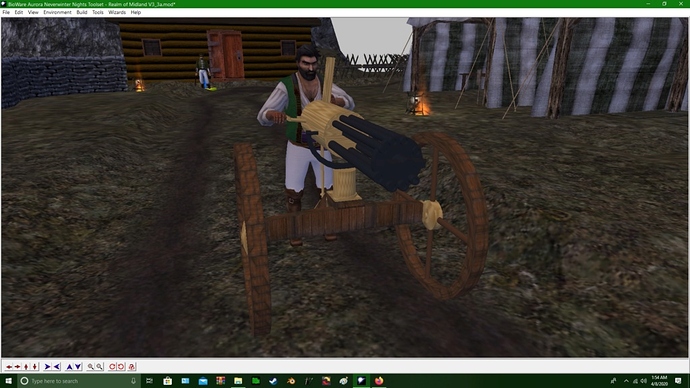 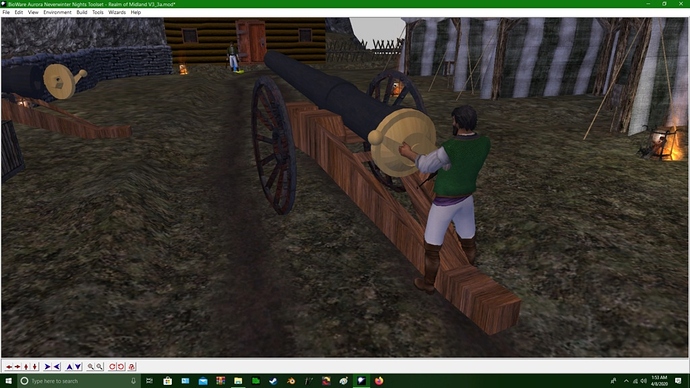 The idea works really well, changing the Vision Distance to Long means they can hit creatures or Hostile PC’s before they realize what is hitting them. I decided to refurbish the npc textures over the days afterwards and then started work on various Level based creatures to fit various scenarios or story driven plots.

The Good vs Evil module does this, NPC appearances as catapults or ballistae. I’ll likely be doing this as well (since there is already a hak for it from GvE). GvE3 on the vault is 3.5. Probabaly other bits you won’t need, but check it out.

I like those, but if that guy fires the cannon he’s gonna die

Maybe he should be off to the side…

Yeah thats right! but those models are literally everywhere, you can find them bundled into hack packs from pw’s all the time. They also dont have npcs attached to them which was my aim here.

Theres always room for improvements, and currently these won’t look quite right without the help of Gylfi Gangler’s work on the Black Powder Rifles as well as no animations (not that i feel they’d need them)

@Meaglyn a good point! However if we’re going with realism here there would be at least 3-4 npcs occupying that cannon as well as at least 2 npcs for the gatling gun so I’m sure he’ll be fine haha

I decided to spend some time talking about some “World building” thoughts over on my Blog regarding some things we talked about here, as well as how technology in general, and how it impacted this world. If you’re interested, feel free to have a look at it. What i think I’ll do is discuss it here with everyone, as well as share some of my current finished projects along the way 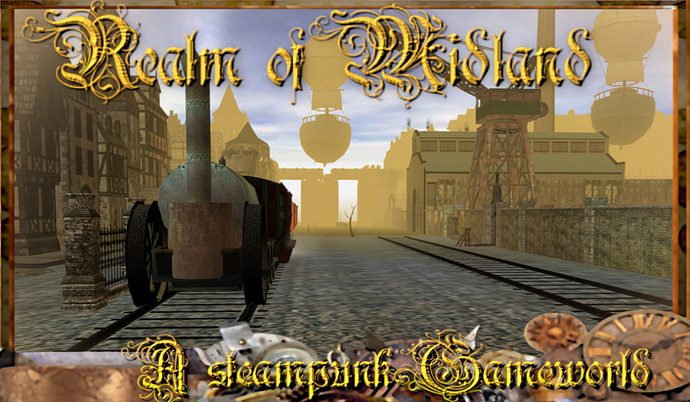 November 13, 2019 Socketed Items and how they work This update will cover the Socketed system, what it is and how it works. What is the Socketed System? Origina

The cannon’s graphic can fix the “realism.”
You see where the wooden structure evens below the gunners feet?
It needs to continue downward so the back part is buried into the ground.
That’s what we did when setting up 50 caliber heavy machine guns in the army: bury the tripod into the ground. Then you have the weight of the earth backing against the recoil.
It’s kind of a minor thing, though.

Thats a very reasonable observation to point out. it’d make sense to dig your artillery in, Even the Rotary Cannon (IE “The Gatling Gun Turret”) would need some sort of footing. The only thing about Neverwinter Nights is it doesnt really consider this as a factor.

The standard vanilla terrain is very flat, while newer tileset content tends to be much more… bumpier? (Uneven ground) so yes it is a minor thing.

Which actually reminds me, there is this really cool Pen & Paper inspired Asset here on the vault that use triggers for players to take advantage of terrain. It will give you bonuses or hindrances based on the type of terrain you walk toward.

I currently use an inspired version that i created for area’s that might require you to be more strategic. Only rather than expect to know why it is your getting sudden magic buffs and decreased effects, i placed in text telling you what just happened.

For cannons, etc. - Why not consider making some placeable sandbags that can be used instead of burying them in the ground. This is something that has been used in the real world in the past for where burying is not practicable i.e, on stone/concrete.

Sandbags are always a good idea. asmof i currently use them in the module thanks to the d20 project.

Currently the equipment is used alongside a sandbag “front line” while i work on designing a more fortified position for the Military to use. 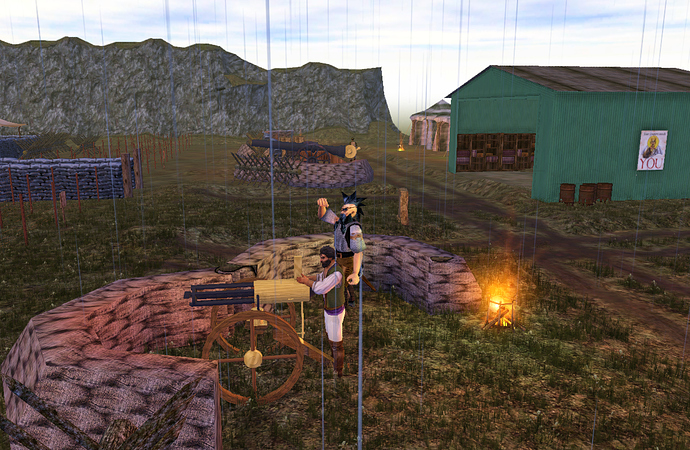 Just noticed the poster. Lord Kitchener would be proud