I’m new to this forum, and to modding in general. I recently got Neverwinter Nights EE and it got me wanting to make a custom module as a hobby, and maybe as something I can DM for my friends. However, with the dated graphics with NWN EE I found it difficult to get past, so I thought I would try it with NWN 2. Also, this gives me a chance to play through the campaigns, as when I was a kid my PC couldn’t run it.

I am curious if anyone has any advice for starting to mod NWN 2? I’ve also read that NWN 2 is more buggy than NWN 2, and that multiplayer does not work well. I am wondering if it’s still feasible to make custom campaigns to play multiplayer with your friends, and to what extent community patches have overcome these issues?

Also, is there any advice on what the most up to date mods for graphics, tilesets, and patching are?

Also I apologize if my questions have been covered elsewhere! I’ve been trying to read through the forums but they are hard to navigate. I would also be happy to be directed toward already existing posts!

Here are some of the stuff that I use. But there’s A LOT that you can download on the vault, nexus and modgames.net. It’s all up to your graphical taste, I guess (I think the facelift pack is mandatory at least):

As I only make single player modules myself, I don’t know how the multiplayer aspect of the game is nowadays. And yes, NWN2 is still pretty buggy, but you can overcome a lot of it by being very particular about what scripts you use and how you construct your module. You learn these things by experience, I guess. There’s a lot of help to be found here on the forums though. Some people here are very skilled and experienced.

I am curious if anyone has any advice for starting to mod NWN 2?

nwn2 is buggy as heck on a nuts & bolts level. Overall it’s very playable though, including multiplayer, esp. single-party LAN-style multiplayer … but MP is an order of magnitude more difficult to mod for.

So … if you’re new to nwn2 AND modding … hm. As an experiment i suggest creating a smallish single player module instead of heading straight into insanity. srsly. Creating, and completing, a small module comprised of only several Areas can get you introduced to any of the basics. Journal entries, conversations, module initialization, turning it into a Campaign with the CampaignEditor, working in directory mode, priority of resources, HOW TO SCRIPT along with events and when to use them … nwn1/2 were made for modding, and the possibilities are … extensive.

in the toolset, turn off “Autosave” under Options asap. The toolset is buggy also and people have lost a lot of time and effort, if not their entire module, because of it. So learn about saving Module(s) in directory mode – it makes them easier/quicker to work with and many edits can be done without even opening the toolset (with 3rd party tools). Directory mode also makes recovery after a toolset crash less problematic.

backup your work regularly. Using a version control system like GIT is not unknown … although imo that’s overkill and simply creating a directory structure that contains backups of customized resources is sufficient.

… to what extent community patches have overcome these issues?

Bugs in the stock resources and official modules are generally addressed in Nwn2Fixes (im the maintainer). But there are several bugs in the hardcode that are virtually impossible to workaround short of |recoding the executable|.

two more you could try:

To kevL_s you listen. Yes, yes. (in the voice of a little well known jedi master)

Totally agree about the turning off Autosave and working in Directory Mode. It makes things way easier, and working in Campaign mode, once you learn it, also saves a lot of headache. Also, the backing up your work regularly is essential when working in the toolset unfortunately. Weird stuff can happen at any time.

I’ve also read that NWN 2 is more buggy than NWN 2, and that multiplayer does not work well.

Just to echo what KevL said, MP works fine - In fact, all my NWN2 modules are designed with Coop MP in mind. (Not tested a PW, but I imagine that works fine too.)

That said, MP requires a lot more careful attention to build than you may first realise.

Also, again to reiterate KevL: I would also encourage Directory Mode, which makes testing much easier, and is much safer for files in general.

Oh, and if you want to follow my blog while I create my own campaign, you can follow it from these forums, (just look out for The Scroll) and a direct link here: 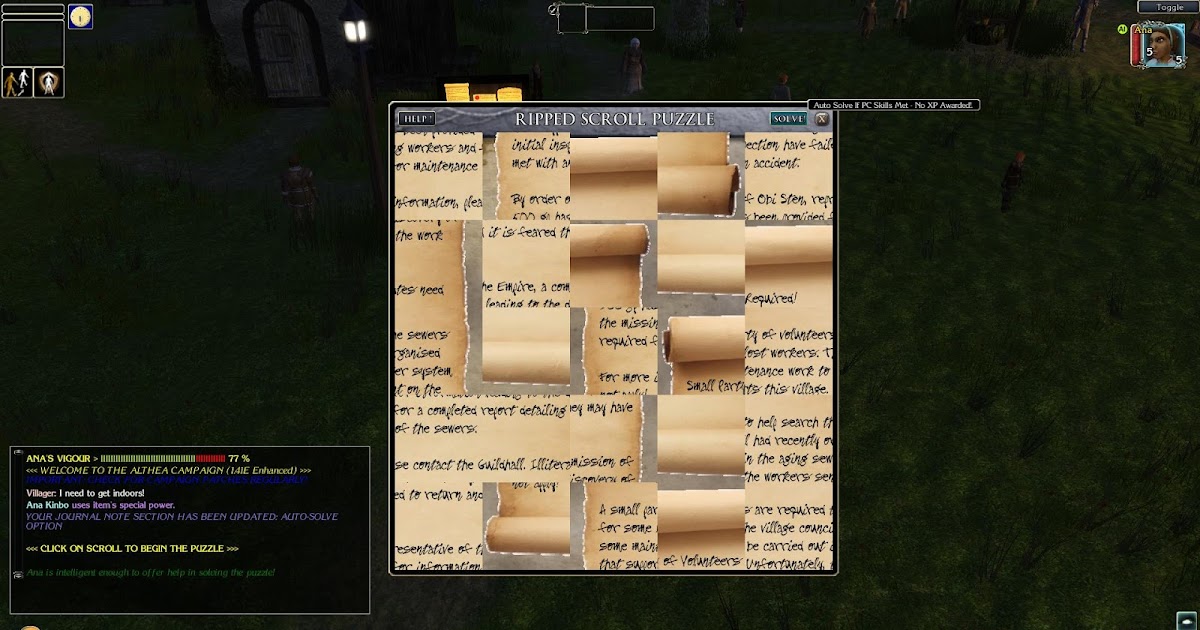 It's been a difficult couple of weeks for my module creation. Just as I thought I was about to do something straightforward, instead, I foun...

Thank you everyone for all the advice!

It’s heartening to see how alive this community is after so many years! I’ve been playing around with the toolsets in both games, I think I might start out trying out DMing for friends in the first game since it’s easier and faster to use the toolset, and then after I’ve played the through NWN2 single player and if they get into it give the 2nd game a try. I’m also curious about the main modules, I know I’ve liked all the games where Chris Avellone has been heavily involved in the writing.

The advice on starting small is good, the toolset seems a lot more advanced than the first one, but that gives more options too.

I modded up NWN2 and the graphics actually look pretty impressive for a game this old.

I’m also curious about the main modules, I know I’ve liked all the games where Chris Avellone has been heavily involved in the writing.

the original campaign about the knight captain ain’t nothing to write home about. it’s a linear adventure with some interesting bits, but that’s about it. if you’re into writing, the first addon “mask of the betrayer” is one of the best written forgotten realms games out there. it has well done dialogues, is heavy on lore, and there are nicely integrated decisions to take.
the second addon “storm of zehir” imitates old adventures like the ones from the gold box era. it’s more about customizing your party and running them through lots of battles. obsidian tried something different here, and included lots of good stuff for the modding community.

@modding for multiplayer: if you want to dm for your friends, don’t concentrate on modding. get familiar with the dm 101 for nwn2 and download prefab areas to tell your story. later you can create your own areas and creatures to spawn. scripting, the most complex part in modding, isn’t really needed when one controls the dm tool.

the ClientExtension, apparently, is also a must for nwn2 dm-ing. I’m not a DM and use the CE for other reasons, but having looked through its docs it sounds like it extends DM-ability quite a bit.

Yes, at Discord, where everyone seems to be about multiplayer stuff, they say it’s essential.

Welcome! Some excellent startup advice already posted here, so I will echo that for now - especially the directory mode and disable autosave bit.

Start small with a basic thing you want to do. If electron proves to be your cup of tea, then get cracking. Most importantly, have fun! Good luck

Also doing a search on the Vault against DMFI should get you a page of useful prefabs, tips, how-to articles, and what not.
https://neverwintervault.org/search/node/DMFI
Good Luck!

Esoterik… I’m with MERP_UK… Start small and have fun. Make an area put in some people and decide what happens next.

In my case what happened next was about a year and a half buried in the toolset and making a whole campaign, then another year and one more, two years and another and… I’ve come back again and I’m making another one !

So it can’t be that bad and it’s not that buggy at all. I’ll add to the no autosave with a beware the appearance wizard it’s temperamental and save your creations often just in case.

At first just use what the toolset has and don’t try to run before you can walk because you will fall over, then probably get fed up and your masterpiece wont reach it’s potential.

andgalf… Does that Facelift pack swap the standard faces because surely that’ll mess up what people look like eg. Where’s the old lady ? On the same number or will I now have the best looking old crone ever in my mods ?

andgalf… Does that Facelift pack swap the standard faces because surely that’ll mess up what people look like eg. Where’s the old lady ? On the same number or will I now have the best looking old crone ever in my mods ?

@Tsongo Not sure about the old lady, but once I began using Facelift pack I could never go back. Most original faces are ugly as…yeah…I use only Facelift pack and A LOT of custom faces made by several people, and very few of the original faces (I mean, look at the hideous elves from the vanilla game) so…Well, to NWN2 has always been an ugly game (I remember thinking that when it came out) but nowadays with all the custom armor and clothes and faces, it looks really nice.

andgalf… I’d just rather custom armour and heads were just that and not replacing content because as a builder I haven’t got a clue who’s got what and what it looks like in my mod.

e.g. I put shoulder pads on some armour, someone replaces it with a custom one and the whole lot looks rubbish, my elf leader’s wearing a sparkling wizard’s hat and trying to be serious or my group of barbarian women are standing in the snow wearing a bra and some knickers due to another armour swap making my conversation look stupid.

I know it’s not my fault and it’s the person who swapped its choice but things like head replacing mods can really go weird when you’re calling someone a horrible old hag and they look like they’re twenty years old and just came out of a salon.

I’ve replaced the armour in my latest mod and will put the male and female mdb folders in the campaign folder so people can remove it if they want the original armours. So if you build with it and it’s in the hak/ campaign folder then it’s not an issue as you ( the builder ) know what it will look like in the game.