I’ve got an interior area ( mines tileset ) which is 16 x 16 so not that big. But I’ve filled it with things ! There has to be about a thousand environmental objects ( prefabbed not one by one I’m not that mad ), there are point lights lighting it and it will have a lot of NPC’s in it.

So far I’ve only got about thirty NPC’s in it, I’ve made sure all shadows are off on all the environmental objects etc. There aren’t many placeables and none of the NPC’s have heartbeat scripts or waypoints to walk to etc.

But the toolset is taking a while to load this area, can hang on certain things and when it loads in game you definitely get it stuttering a bit as you walk and the frame rate drops.

So my question is, when I’ve put a lot more NPCs into the area and later on when all hell breaks loose and it goes off in a big way is this area going to cause crashes or issues. I’ve not had an interior area slow up the toolset so much before and I’m a bit concerned especially if spells start flying.

I could put the tavern, house of ill repute and guest house as separate areas but was trying to avoid load times and wanted the player to just whizz around without a break, but I’m worried it could go horribly wrong and before I put in more things wondered if I should break it up a bit.

Any ideas or encouragement from people that made 64 x 64 interiors with a thousand NPCs in and heaps of placeables welcome.

ps. The computer I’m doing this on has 16GB of Ram, 4 more on the graphics card and a 3.4ghz quad core AMD chip so has never been an issue with this game.

Any chance you could upload the ARE/GIC/GIT/TRN/TRX files and any custom scripts you have running there for that particular area?

travus… I exported it as an erf and put it into another module, tried to play it but got attacked by everybody so it’s pretty useless because of a custom faction that becomes hostile. I’ve just slaughtered the innocent people of the Mines !

There are only a couple of custom scripts to change the music in certain areas but that’s about it. A lot of the NPCs are wearing custom armour from an armour swap I did but nothing fancy is happening in this place, it’s just straining the toolset.

I’ll see if I can dropbox it here, but no conversations allowed… It’s a secret ! Most wont work without your companions anyway.

I hope this works… Dropbox - Upper Mine.erf - Simplify your life

Set a new faction or get attacked, make it Neutral and 100 to everything, don’t forget the capital N it might make a difference.

Why does it say simplify your life on the link ? There’s no way I called my area that it’s supposed to be difficult !

There is a long load time of about 30 seconds in the toolset - I’ve seen worse. Once it loaded, I didn’t have any issues manipulating any objects.
I have all my graphics settings set to max.
Without the Client Extension, there is a very noticeable choppiness and framerate drop when panning around the area. Other than that, things seemed to work fine.
With the Client Extension, it’s actually quite astonishing how better it is. The chop is pretty much gone and the frame rates are noticeably better.
When you post this mod in the future, I would recommend you tell the players to use the Client Extension. Otherwise it looks like you would have to remove some of the thousands of environmental objects to get a better load/framerate.

I just did another test by deleting every environmental object. It only improved slightly. Nowhere near how good it was with the Client Extension with all environmentals intact.

travus… Thanks for testing it for me, I’ve never used the client extension as I thought that was just for multi player. I will have to investigate.

I’m still considering taking out three parts because this place is going to have a lot of people in it when it’s done. That’s why I’m not making them move or do anything too clever.

I thought by keeping the area relatively small I could get away with filling it up with junk and people but I could be wrong. I really want the stuff to stay on the floor and by the sounds of it that’s not the total cause of the choppiness so that’s good. Thank you for the double test I haven’t got the heart to remove a week of work.

This is the apocalypse and I can’t have a tidy mine but crashed computers are much worse so people will be warned !

To be honest, since you plan to add a lot more characters, even with the Client Extension, you might want to go ahead and bite the bullet and split the area into two or maybe three areas to prevent chop/framerate issues. I’ve seen other modder’s areas that had a lot of characters/effects/lights/sounds that really put a beating on your computer. Even with the Client Extension you’ll notice the dip in those situations. It takes the fun away when you have to play at 5 frames!

travus… I tried the client extension and it definitely does make a difference. But I think you’re right I’m going to do some bullet biting and remove the tavern, guest house and red light area to three upstairs areas, possibly the zombie cages will go downstairs somewhere too which should remove some pc strain. Load screens have to be better than jumping graphics.

Hopefully I can make a prefab of all the things in those areas and just stick them straight in the new area, I’ve had enough of placeables and environment objects at the moment !

travus… I made a prefab of all the objects in three areas, made them separate areas, deleted the originals and put in the prefabs in the new ones which really made my computer suffer ! I had to move the huge prefabs with the arrow keys bit by bit with a delay on each move. Strangely enough rotate was pretty fast.

Anyway, it’s a lot better now, biting bullets worked and if it did stutter I didn’t notice it. That was without the client extension but I’ll still recommend it just in case. Thanks for the help, I’ll be filling it with people later.

It’s resolved but for reference: 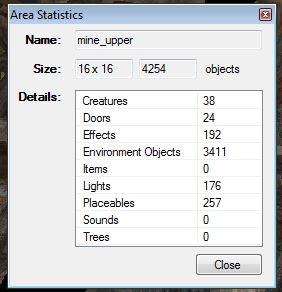 That’s almost assuredly way too many objects. In fact I’m surprised it loads at all as I remember someone on the old Bioware forum trying identical bricks in an area until it crashed, and the limit was around 3250 objects, even all set to environmental.

For reference I was killing people’s framerates with the exteriors in Crimmor. Here is one city exterior. 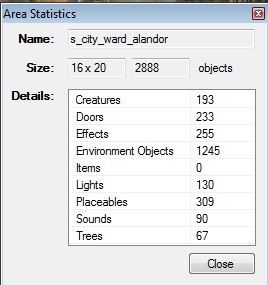 kamal… Guess I got a bit over enthusiastic with my environment objects, I had no idea it was that many ! It’s now had another part removed and is running alright. I thought I could get away with it in an interior and never really thought about it until now. I was just concerned about too many lights overlapping tiles… Thanks for showing me that.

How did you get the toolset to do that and show you the statistics ?

Almost all of them were running a simplified ai since there was no combat in the area. But still, if someone wants to stress test how their computers deal with NWN2, just starting Crimmor and walking around the city is a good way.

kamal… I love the idea of stress testing your computer by walking around the city in Crimmor, that’s awesome.

My creatures aren’t doing anything but standing still unless I actually move them so not even a simple ai for me. I might put a run away if there’s a fight one on their heartbeat but I don’t know yet and will have to see what happens when it goes off, spells getting thrown about could be an issue.

How did you get the toolset to do that and show you the statistics ?

That’s one of the many features of the Powerbar plugin.

travus… Thanks, I’ve never used a plugin but will give it a go.

travus… Got the powerbar working and I’ve now only got 2530 environment objects and 58 placeables. So I’ve moved over a thousand bits and pieces and all is good in the mines now… But I’ll still recommend the client extension, just in case as the residents are beginning to arrive now.

Surf mysteriously halted by sudden line in the sand.