Analysis of Blood and Gore

Every wonder which creatures have which color of blood and what kind of gore is available for the different bloods colors? Having nothing better else to do, I decided to dig into it and discovered the following:

It strikes me just how much more gore red blood has compared to the others, slightly more than twice as much! Also it appears that the intent of white blood is to have bones and nothing else. Although that doesn’t explain why golems have white blood. Yellow appears to be for diseased undead. Green blood seems to be a catch-all category for magical creatures-which-are-not-diseased-nor-skeletal.

For my custom content, I am going to change the blood for all constructs to None or **** except for the bone golem. Umber Hulks will have green or red blood instead of white. And given how there is twice as much red gore as green, I am going to give some serious thought to changing a lot of creatures to red blood as I prefer to have a lot more gore in my combats.

Nothing has actual blue blood? In rl the Horseshoe Crab does.

Celestial beings could use blue blood.

But I don’t think it is possible to add new blood types that way (hardcoded). Or in the very least I haven’t found a configurable appearance.2da[bloodcolr] 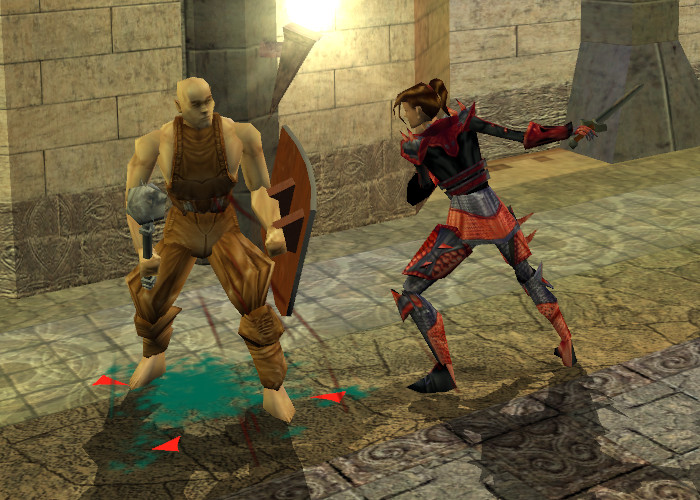 That is very odd. The bleeding guy is Human Male 07 and is assigned red blood in appearance.2da.

And he still is in that picture

(note the red blood particles coming out of him).

LOL!
this is some truly awesome work, guys. definitely gives me some ideas on how to change things up to make them more interesting.

this shows that a module builder can obtain convincing blood effects of any color if needed.