Just wanted to say how hugely impressed I am with the EE Android beta.

I’m still working through my modules, but so far I’m blown away by how similar the gameplay is to a PC. I never imagined that so much could be achieved with a touchscreen, to be honest. 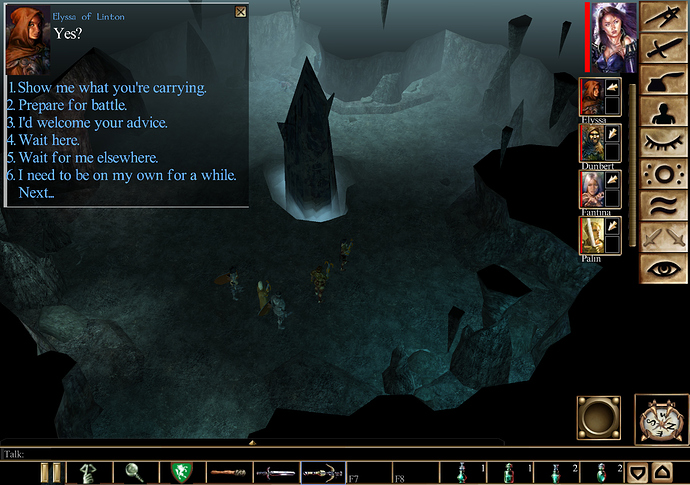 There are little glitches (it is a beta, after all) but Beamdog are acknowledging and reproducing reported errors very quickly, with a view to fixes shortly.

These involve things like hotspots on a few GUI panels, area lighting on some devices and game rebooting on window toggling, but no showstoppers so far.

True, you have to buy the game again on Android to join the beta, but the license is good for the final game, too. To my mind, a small price to pay for injecting new life into NWN.

Thank you for your kind words.

Many people have worked months on this, so, although I’m obviously quite biased, I think the asking price is very fair.

One of the things everyone is looking most forward to is supporting crossplay between desktop and mobiles. I think that’s something PWs will have to figure out as things develop.

Also something to figure out is content distribution from the vault, since putting things in place manually is cumbersome, to say the least.

Yes, NIT for Android would be great.

I have ES Explorer and RAR, but, apparently, moving files requires navigating to the destination folder every time, rather than having two windows open. I can speed that up a little by putting all the files in one folder in Downloads, copying same to the NWN User, then moving to subfolders.

If anyone knows how to expedite this without rooting, let me know. ES Explorer seems to be hinting that a custom launcher might help?

Beta seems remarkably stable. I played through Enigma Island Part 1 with only one crash EDIT which Beamdog have now fixed.

That was a showstopper (EDIT at the time) right at the end of one branch of the main quest. Fortunately, I keep saved games at major decision points, so I could test the other branches.

Found quite a few cosmetic issues, of course.

NIT for Android would be great

Nice thought. However, I don’t believe NIT is portable enough and I do not have Android expertise. Happy to help anyone who takes up the challenge.

A novel feature of the Android version is that the second story is never hidden - a “keyhole” opens to allow the player to see through tiles and placeables to their party. Personally, I was still able to find my way through the narrow streets of Fenchester, but then I know where everything is. It was be good to hear what other players think.

There is a lighting bug which makes some areas look dark, even during the day, which will put some people off - Beamdog logged as work-in-progress.

Being somewhat ham-fisted with a tablet and stylus, I find that companions often block the player until you find the sweet spot to move towards, and combat passes in a blur unless paused for finesse, but that might just be me. Doesn’t detract from a very sound port to the Android platform.