Just had an idea that it would have been cool to do some sort of a mini game with arm wrestling at an inn for example. Going through the Animation Viewer in the toolset I couldn’t find anything with a character sitting and holding his arm in front of him. Does anyone know if there is some sort of animation that one could use for something like this, or is it impossible perhaps? Tried to look at the Kemo animations, but I don’t think there was anything there either that one could use.

My thought was, if one could just use a custom animation where to people sit down on a chair in front of each other with one of their arms out, maybe that would be convincing enough to do some sort of mini game like this. Or maybe not…Just trying to come up with new stuff to use in my fourth module.
Any thoughts?

Andgalf try looking in MOTB. Specifically the try looking at the Warriors Lodge. Sorry I can’t be more clear the name of the lodge is just not coming to me. There is an arm wrestling contest. I just can’t remember if it was animated or not.

Unfortunately this mini game was just conversational iirc. It has been a while since I played motb but im 90% sure

Thanks for responding! Ok, I’ll try and take a look at it though. I didn’t remember there was such a thing in MOTB.

Hmmm, couldn’t find any Warriors Logde. Could it have been Ice Troll Lodge or something else perhaps?

Edit: Ok, think I might have found it. A guy called Forovan in the Ice Troll Lodge seems to have this kind of competition.

Edit2: Indeed it was, just as @MERP_UK said, just a conversational contest. I wish there was a way to somehow use some kind of animation to this. Maybe not the slamming of the other’s arm on the table, but at least that the hold each others hands, or hold them in front of one another at a table.

Going through all the animations again in the animation viewer…Maybe the best one to use would have been SIT_DRINK if one could have freezed the animation halfway through, but I don’t think that is possible.

I suppose you could try and do something clever with static cameras and/or effects. Petrify or paralyse maybe? I’ve not dealt with either very much so I can’t explain the pros and cons. It might be a bit fiddly just to get something thats OK but I wish you luck with it

Right now I’m using SIT_DRINK and I managed to stop the animation and then freeze the player. I mangaged to find some old scripts by people here on the forums to help with that. It actually worked once I figured it out. The next step is to sit the PC and the opponent down and then do the animation and freeze on both. It will be interesting to see how it looks.

Well, it didn’t turn out so well. I think I’ll need a really tiny table for it to work somewhat. 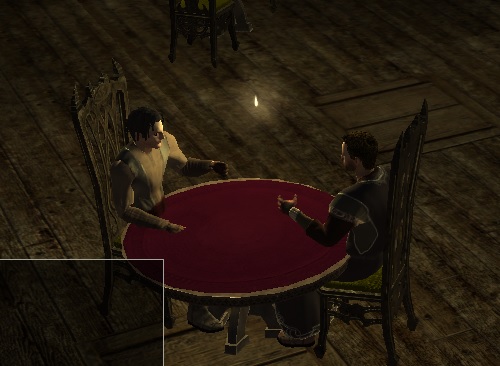 This is the best I’ve managed, and I don’t know if it is that good, honestly. It doesn’t really look like arm wrestling at all. Maybe I’ll have to just give up on this. 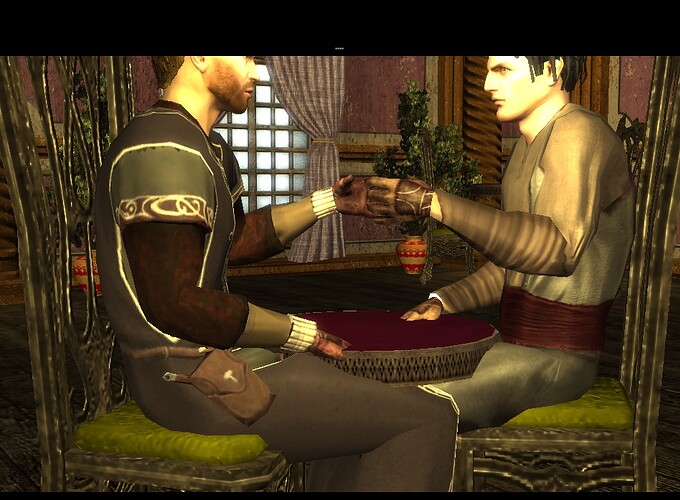 Maybe I’ll have to just give up on this.

Not so fast. It doesn’t seem to difficult an animation to make. I know, I’ve still the fly/jump thing already, but gimme a few days and I’ll send you something (two things though: only human male skeleton, and both would have to be the same height - remember the kissing animations?)

Thanks, 4760! Well, in this adventure your PC is restricted to be human or half-elf, so my guess is that they have both human skeleton? The opponent is human.

Another thing, if you manage to do some sort of animation of this, maybe try so that it can be looped, so I don’t have to use the freezing of the characters? They really become lifeless when doing it like that (and it’s how it’s done in the picture) but I had no other way of doing it myself. In a still like this it works but ingame it looks quite odd when they are totally freezed.

It’s too bad I really like animations, since NWN2 is not too fond of doing that (at least not custom animations). It causes a lot of problems when I want to do stuff that the game wasn’t intended to do.

they have both human skeleton?

maybe try so that it can be looped

Don’t you want the animation to end, with one winner? Well, I can do the looping animation when both are wrestling, and then make either side win or lose in a second part, starting at the same point at the end of the loop (beware, timing issue highly likely. Well, we’ll see how it goes).

Don’t you want the animation to end, with one winner?

Didn’t think about that. Yes, that would be the best, of course. Maybe to two variations where one or the other wins then, perhaps? Maybe one can control through scripting who wins before the animation starts and then run the appropriate version?

First testing done. I’ve got a few things to fix in the animation and also set the size of the table so the wrestlers don’t pass through: 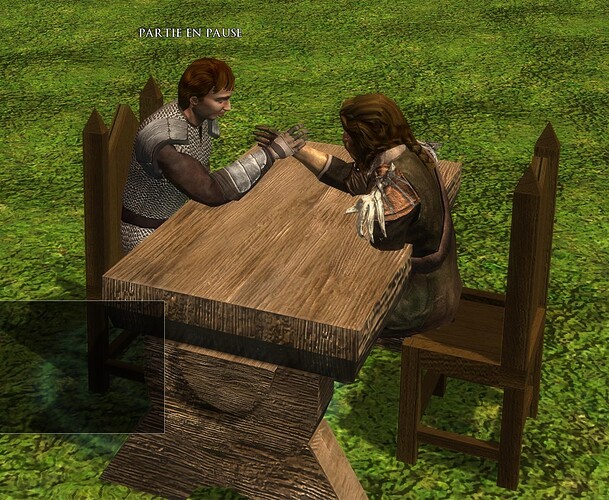 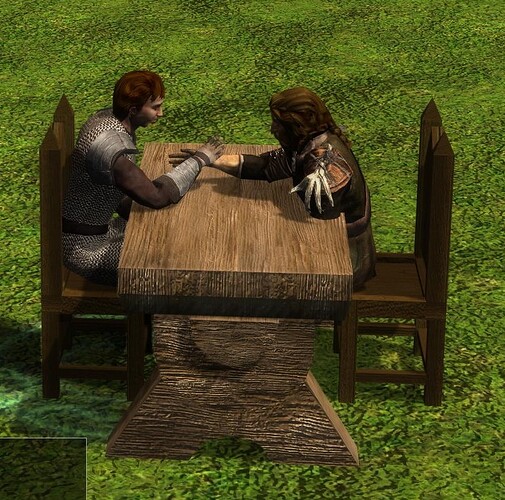 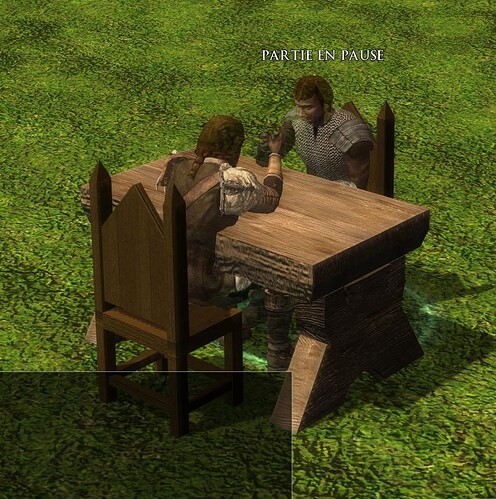 The animation looks much better now: 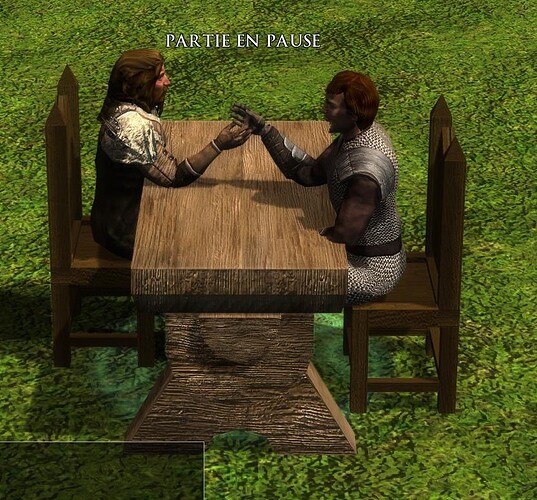 Especially for the win/lose part: 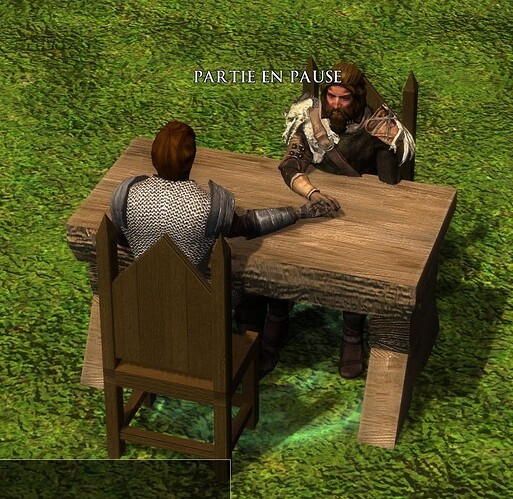 However, there’s still one spot or two spots where the hands are out of sync: 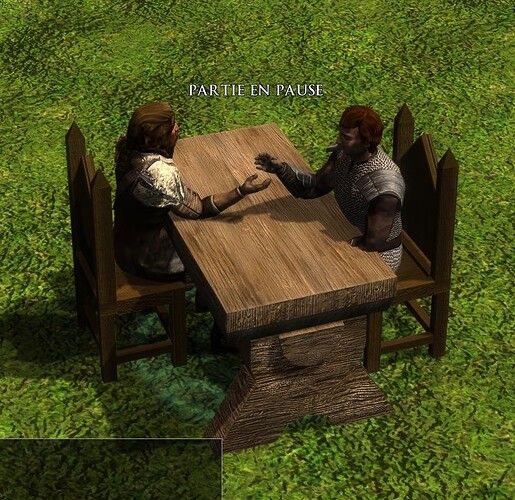 Anyway, if you want to try the animations, it’s right here.