Anyone Know How to Fix This? - FIXED (Sort of)

Anyone know how to fix this? 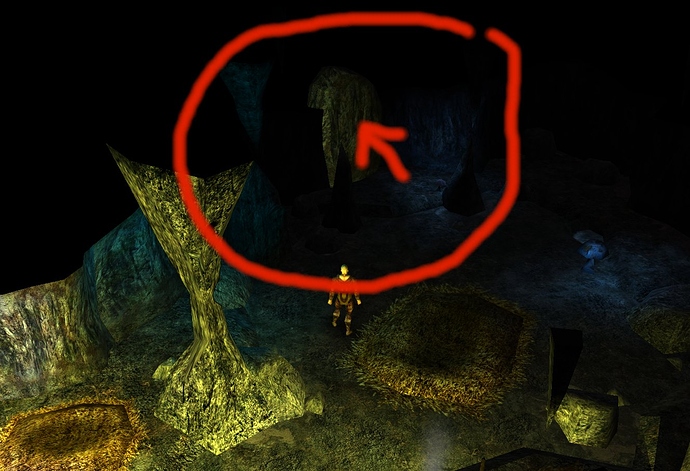 As you can see in the screenshot - despite it being textured using the same texture as the tile walls and with both models’ ambient/diffuse set to “1 1 1”, specular set to “0 0 0”, and shininess set to “1” (to match the wall’s shininess setting) - the placeable secret door stands out from the tile and is easily discernible by the player.

I want it to blend in. I am fighting against the engine here, or can it be made to blend in and not stand out?

Figured it out - its due to the placeable not being set to “static.” Looks like I’ll have to have a static door in place that when detected is replaced with a “useable” one.

Had to scrap this method as DestoryObject() doesn’t work on static placeables. Opted for a locked/trapped boulder that needs a high STR to open.

I know it’s a bit late to respond, but it may be to do with shadows being accepted or cast by the placeable. Just a thought anyway. Check the shadow settings on the placeable.

Lance, its definitely caused by not having “static” ticked. According to the wiki by TheKrit, when a placeable is set to static, its rendered as part of the tileset. I was able to confirm this by setting it static, at which point it was no longer highlighted (for lack of a better term).

EDIT: My bad - I just realised you are referring to NWN1, which may be completely different. It has been a while since I did that toolset.

However, if you are referring to just the z-key highlight, then that can be worked around by making a placeable object useable (or not) via scripting. i.e. It is not “static”, but it does not highlight until made useable.

Nope, not the “TAB” key highlight (Z is for NWN2). In NWN EE - haven’t checked in v1.69 - it seems that when you have a placeable that has no flags checked (usable, plot, and static) it is colored differently from the rest of the tile it is placed on, even when just using darkvision, giving it this sort of highlight effect that makes it obvious its there.

However, thanks to the new SetTransitionTarget(), I was able to effectively conceal the transition behind the placeable boulder door, having it appear after the boulder is “opened.”