So I got 1 encounter trigger with 6 spawn points spread about. However, only 1 spawn points seems to be activated every time a player steps on the trigger. Does this mean that 1 trigger can only be associated with 1 spawn point or am I missing something?

Image below of attached a toolset screenshot of my spawn points and trigger: 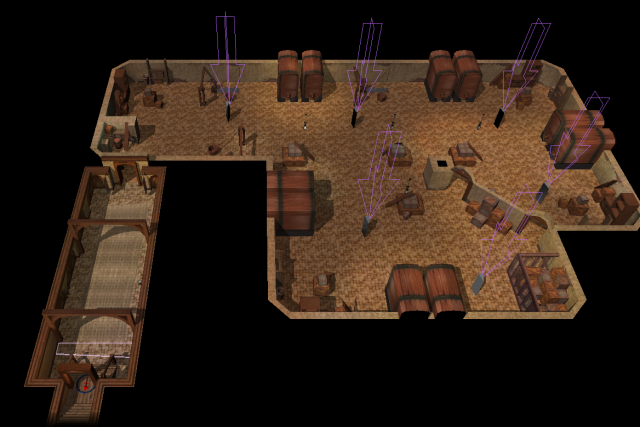 vanilla encounter will choose spawn point farthest from the position where player activates it, not random one

Could you specify which is the one that is apparently always triggered?

The one in the uppermost right corner is always triggered (i.e. where the creatures always spawn). So basically what you’re saying is that I need to create 6 triggers if I want to spawn 6 separate encounters? I’m asking because it seems silly; I thought the whole idea of spawn points is that you can associate many spawn points to 1 trigger.

No, what I said above is that you actually did set up everything properly and the engine should choose randomly between your spawning points.

But the one in uppermost right corner is actually the one farthest away from the PC, so something isn’t working properly.
EDIT: You could try moving the one that is always triggered to the hallway so it is the nearest to the PC now and see if it is still the engines only choice. That could give a hint what’s not working properly.

Regardless of what it’s supposed to do I believe Shadow is correct from what I’ve read elsewhere. It chooses the furthest spawn point from the PC activating the trigger. I’ve used that fact myself numerous times to hide spawns. I do believe it uses direct distance too, and not pathing distance.

I’ve been using this also, seems the above is true.

It is still quite useful in certain situations (not in your screenshot example) if a trigger can be accessed from different directions, so that creatures do not spawn behind or on top of the party etc.

In the above example, I’ve just placed multiple triggers yes, not sure if that’s the most efficient method.

In the above example, I’ve just placed multiple triggers yes, not sure if that’s the most efficient method.