we (cRPG lovers) might be having some great news in the following days. A year or so ago, a member of RPGCodex said that a buddy of his/her worked in Larian studios and that he learned that Larian studios obtained the license for a Baldur’s Gate game. I didn’t follow the topic, because to be honest it could be a random person saying random stuff, and because I try to stay as far away from the Codex forums in general.

Fast forward to last week, Larian studios updated their website to only show the number 3 in roman numerals and a minimal animation. Theories said that it could be a Divinity Original Sin 3, but a dig through the source files of the animation reveals the name and trademark notices of Baldur’s Gate 3 and WotC.

Anyway, whoever is unfamiliar with the studio (I doubt people don’t know them, but still). They are the creators of 2 of the most successful cRPGs of the last 5 years, Divinity Original Sin 1 and 2. I, personally, could not think of a better studio to create a BG3. Still, only a rumor but worth sharing, I think.

I hope this rumor will turn to be true and we’ll get to enjoy another installment to the genre we love.

I don’t know, looking at the page source html and the .mp4 file there doesn’t seem to be any reference to Baldur’s Gate or Wizards of the Sword Coast. Lots of kraken, calamari, squids, sushi ecc references… (the tentacle animation I suppose). Either they removed those references or this was just a hoax.

It could also be (Divine) Divinity 3, which is their Action RPG series.

The roman 3 does look somewhat similar to the one in Baldur’s Gate 3: The Black Hound logo, although there were no tentacles back then. 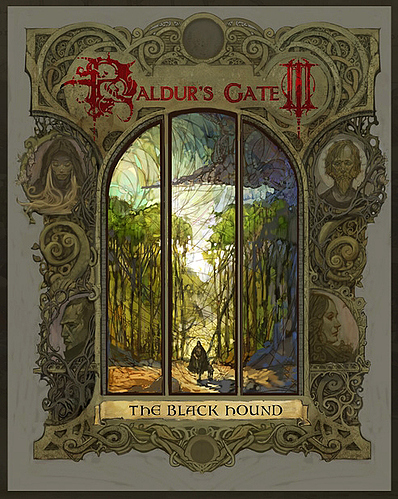 To see it apparently you had to download the mp4 file and open it with a text editor. After the tweets about what’s written in it Larian changed the element name and now it is named “Swen’s Birthday Party”, lol. Swen is the owner of the company.

I know, I’m just saying that those references are no longer there, there’s nothing about Baldur’s Gate or WOTC right now. If this was the case before those tweets, quite frankly, it’s something that we cannot verify

It might be worth noticing, though, that if you download the .mp4 and run it from a player, the default title of the video will be “DOS_Fade”. DOS also stands for Divinity Original Sin…

Edit: looking at a cached version of the page of May 30th, even there there’s no reference to Baldur’s Gate or WOTC, when did those tweets come out?

Good question. I don’t know to be honest but I think on the same day, quit fast. If someone trolled the players around the globe with these tweets he took quite the effort. Well, we’ll know probably Thursday as websites around report that Larian will have anouncements during a google strem.

The wizards of the coast ™ in the movie meta-data when you download it and open it in notepad had me intrigued… then when it went viral they added tentacles, and changed it to “It’s Sven’s Birthday.”

I couldn’t think of a better studio, in 2019, to handle Baldur’s Gate 3. Larian has proven themselves with the Divinity: Original Sin games. I played through both of those at least 5 times; written several class guides on Steam and got very immersed. They’ve been some of the most RPG fun I’ve had since the Baldur’s Gate games.

People tell me they are beyond amazing. I’ve love to have time to play them. I’ll buy them on GoG if they are on sale.

You are in for an awesome experience. They are by far my favorite games and something I had been waiting to see in cRPGs for many years. When you play them it really feels that they were developed by gamers for gamers and with a lot of love and thought put behind them.

My personal favorite way to play them is couch mode. I always play games with my wife, and it usually is so that one plays and the other plays along, then we switch. With DOS we could finally both play on the same computer.

BG felt rather like a finished story to me. If they were to make a new game in Forgotten Realms setting, It would not be rational to obtain rights for this particular franchise, rather than just rights to make DnD-based games. Sequel only needs approval from copyright holder to become canon for FR timeline and has no need to bear same trademark at all. Only what comes to mind, why rights to BG trademark wuld serve it’s purpose is if one is to reboot BG 1 and 2 with modern tech.

I agree that BG felt like a finished story, however plenty of 5e campaigns reference a time (in 5e timeline) where BG is the center of attention as a city.

For example, one Bhaalspawn had remained and attacked the city. I think this is the adventure “Murder on Baldur’s Gate” but I could be mistaken. But after that, lore says:

“With all of his children dead, all of Bhaal’s essence was freed, allowing for his resurrection. Bhaal was revived, and reclaimed the murder domain from Cyric.”

Now I don’t say that a new Baldur’s Gate game will be about Bhaal. I am not even sure I really want it because of fear that it might feel like they are trying to cash in the name. All I’m saying is that the lore is there for a continuation. I would prefer something new though, preferably not in the sword coast. However, I am certain WotC will not go for such a thing.

Why do Thou think WotC would not want PC games about other parts of Faerun/Toril?

That’s a good question. It appears as they are pushing sword coast quite a bit and are “afraid” that anything that extends out of it will look foreign to the casual gamer.

For example, my wife has played all cRPGs that are based in sword coast (and MotB in Thay). When we decided to give tabletop a chance, I suggested that I use my homebrew world which is used also in my NWN2 campaign. She was reluctant. She said she would much rather play somewhere where she knows a thing or two. Talking to another friend who joined the table, he said the same.

Looking at the adventure paths of the 5e, you see
1 in the underdark
1 in Chult
5 in the sword coast
1 in another setting.

There are chapters in some of them that take you somewhere else, briefly, but that’s it. Mind, I don’t complain. Some of these adventure paths are high quality products. It’s just a remark that they seem pretty reluctant to release anything based anywhere else.

edit: I forgot, they released a Saltmarsh thing recently.

So, they maigt be afraid, that people will become frustrated due to need to crowl out of their comfort zone. It saddens me to realise, that this happens to game, where people are intended to imagine themselves an adventurers, exporing the foreign lands etc.

i for instance like to take The Planes from Planescape and homebrew some new locations into them, since each plane is supposed to be an infinite universe in it’s own right and thus enough space for imagination, while remaining in canonical world boundaries and being able to exploit all those fancy planar effects.

Though to think of it, WotC would hardly loose anything if they only provide license to PC game dev (especially as renowned, as Larian Studios) and allow them for freedom of choosing exact time, place et cetera. Even if it would not be as desired by hardcore Sword Coast fans, I doubt Larian Studios would be capable of dealing any reputational damage this way.

Well I’d say it is now official that Larian are making Balders Gate 3. Just look at this web page.

I am so happy. Divinity:OS 2 is hands down the best isometric RPG since the days of PS:T and BG2. If there’s anyone who has the right to touch BG, it’s Larian.

Yep it is being advertised on GOG I was just notified via email.

I got shivers when I saw the teaser. I just can’t believe it that we’re getting this… From this studio… Unbelievable

Indeed: it’s really a good time to be alive!

There’s also a GameSpot announcement that is a breakdown of that trailer including Easter Eggs you may have missed.