After months of looking through files and testing, I think I got this UOP done (for the most part)! Over 500 fixes! From the journal, to bad area names, to bad item icons, dialogs not running, duplicate NPCs, and whatever else I could find. The full changelog is in the download.
This UOP was intended to be used with the Baldur’s Gate Reloaded Conversation Overhaul as it alone fixes many things dialog related that are not fixed in this UOP. Install BGRCO first, then install this UOP over the top.
Once I get any bugs out of this UOP, I’ll merge it with BGRCO.
For now, I wouldn’t mind some folks to test this to make sure I didn’t screw it all up, or if there are any bugs that I missed.

Cool! Maybe next week I can give it a shot.

If you don’t already have a copy of the BGR Conversation Overhaul, you can get it on the Nexus. The vault page for it points to a dropbox folder that no longer has the file.

Getting started an odd thing that is probably not connected to the UOP:
After the death of Gorion and Act I screen, my screen goes black when the rogue shows up and begins to speak. The interface is still there but the terrain is completely black and the party is likewise invisible. Only exiting NWN2 and restarting the game will clear this issue.

Were you able to see Imoen run up to you for her dialog before the black void, or did it immediately go to black void after the Act I scene?

It was immediate. Until she joined the party I could not see her at all.

I can’t seem to replicate that issue. Does it happen for you every time? Do you have a save file just prior to it?

Twice that I recall so it’s definitely not the UOP.
I’ll check for the nearest save to the bug.

One prior to the bug, one after;

Hmm…I ran both saves and did not experience the issue you have. Anything in your override? Are you running on a Mac by chance?

At the time my override contained:
*Attack-be-gone
*orb of loot gathering
*Etherchest

I don’t recall what I had installed the last time I saw this bug but probably just the orb of loot gathering.

I’ll re-try it tonight with a clean override and see what happens.

I deleted my override folder and replayed the ambush. This is what it looks like.
Dell Inspiron desk top, Intel i5 CPU, Intel Graphics Chip, plenty of everything 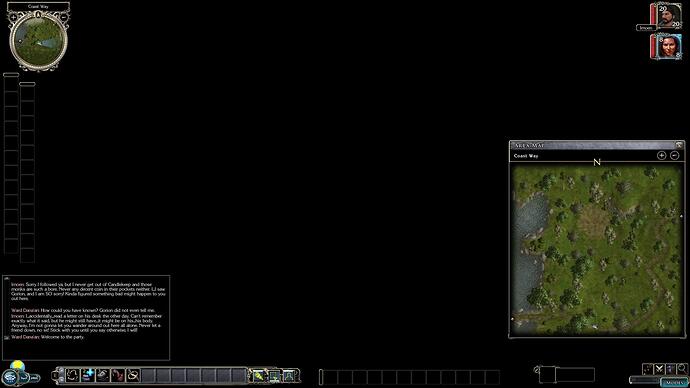 This might be a long shot, but I did find an issue with the dialog file when Gorion dies. The issue is regarding a stock ga_fade_to_black script that had no parameters assigned. Not sure why it still worked for me but not you, but who knows. Put this dialog file in your override and reload from before Gorion’s death:

That fixed it. After the cut scene finished and Imoen joined it was still black. As soon as I touched the mouse I got a normal screen again.

Possible bug: No Ruffie. I’ve checked all the areas near Nashkel but no doggie.

Arrow of Ice - There appear to be three incompatible blueprints. The resulting arrows have the same icon and properties but won’t stack with each other.

Gnoll Stronghold - The western most ladder into the small pit is selectable but does not function.

Archeology Site - If you do not agree to help Gallor initially, he will not longer speak with you, even if you do take the idol. (That may be correct, I don’t recall ATM)

Lighthouse area - There used to be an encounter with a water sprite and her Ogre Mage boy friend. That did not appear.

Firewine Ruins - There used to be a group of ogres (Ogre Magi?) in the far western area near the Halfling traitor’s secret door. I see a speak trigger on the floor there but no Ogres.

Install the attached fixes to take care of some of the issues as discussed below.

Ruffie spawns on the Northeast corner of the Fire Leaf Forest area. He should spawn after you talk to Albert. Ruffie does roam around so he might be in a different location in that area. He could also be hiding under the water as it is walkable in that part of the area. If you have the chew toy, Ruffie should run to you once you get near him. If you still can’t find him, I’ll make some kind of fail-safe script.

I made a fix for the Light Crossbow of Speed (ar3301_on_enter in the attached zip). Install the fixes attached here and then just enter the smithy again. The crossbow should now be updated to have Rapid Reload (as long as it’s still in the store).

I made a fix for the Ice Arrows (bgr_mod_def_aqu in the attached zip) as there are in fact multiple blueprints for that item. After you install the attached files, just drop all of the Ice Arrows on the ground and then pick them up again. They should auto-merge.

The ladders in the Gnoll Stronghold should now be working more reliably (on_use_ladder1 and ar5100.are/gic/git in the attached zip). To test it you’ll have to reload a save from before you enter that area.

Gallor will not talk to you later if you refuse him. At least that’s how the dialog it set-up.

Shoal and the Ogre Mage are in the next area north of the Lighthouse area, if that’s what you are referring to.

I made an edit to the script in the Firewine Ruins area (gtr_landarn in the attached zip). Walk over the trigger in the Northwest part again and it should spawn Landarn and the Ogres.

Sounds good. May not be able to test for a couple days.

Went back to check a few things:

Ruffie either spawned or became stuck in some rocks just north west of the waterfall. When the party got to the correct angle he popped out and followed correctly.

Shoal and the Ogre Mage - I can’t get the next area north to become available. I thought it might have been caused by not letting the swashbuckler join the party although I’ve never used that NPC before either. I reloaded and added her to my party but no luck. I also tried reaching it from High Hedge, and the Coast Way. 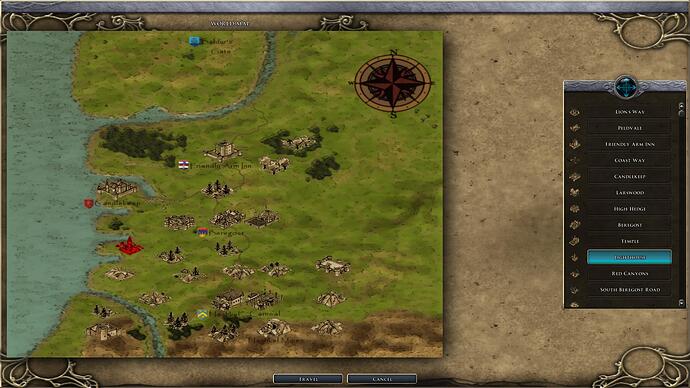 It looks like Ruffie’s spawn waypoint is right on the very edge of the walkable mesh. So, I imagine there is a possibility of him getting stuck in the non-walkable space on spawn. I think I might go ahead and adjust the spawn script to prevent him from getting stuck, just to be sure.

That area with Shoal is only revealed from the western most transition in the High Hedge area.

Okay somehow I missed that far western transition. In the Shipwreck area now.
New Issue: All conversation paths with Shoal lead to death, end of game. Party is at level 6. I’ve tried all the available spells and equipment. Just to be sure I consoled in some +4 gear to try to avoid being hit and a Bone Dancer’s Ring to be immune to death. She always attacks and always hits on the first attack. The death scene script fires and the game ends.