Build Error: "This container is full and cannot accommodate the selected item" (Resolved)

I did a rebuild of my module and got this message:

“This container is full and cannot accommodate the selected item”

I have never seen it …ever!!

Any clue what this means? I did google searches on it and really found nothing helpful.

And I changed a few things on my baseitems 2da. I have attached the error message as well as copies of my two 2das I made changes in. Any experts out there see anything in these that could be causing this error message on a build? 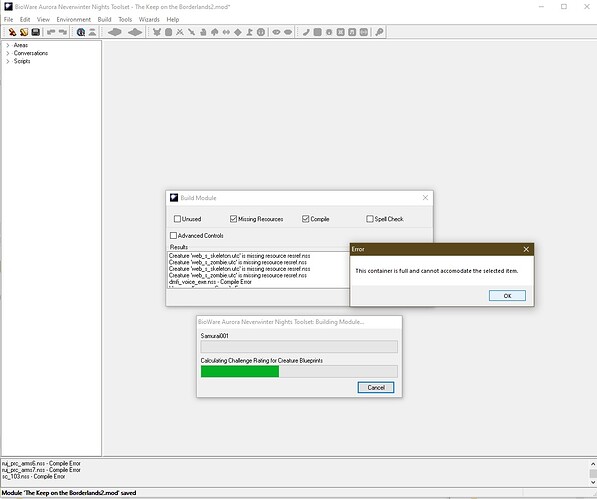 Oh for … I can’t seem to upload my 2das here now…what the heck?

This message was introduced in NWN 1.67. According to a dev at the time

Error: This container is full …

there was a check added to disallow putting larger sized items into a container, as an exploit prevention for putting the portable encampment in Infinite Dungeons (a 10x6 icon) into a container’s 7x5 space (that is, no putting it into a bag of holding to get around the weight of the encampment to limit you to carrying one or two at a time).
It seems that the act of putting a normal sized item in a nearly full container triggers this check as well, when it should just create another page.

so it’s very likely that something you changed in baseitems.2da triggered this.

Thanks Proleric. I do have that very portable encampment in my module. I appreciate your help. Where would I find that and how would I fix it so on the build this message does not pop up and stop my build.

EDIT: I know I put this portable encampment somewhere in my module I just forgot where in my world (which is huge) I put it. Would removing it out of the container fix this issue? How can you do a specific search for an item in a container somewhere in your module? Sigh. But, dude I’m grateful to you and so many in the community for your help…honestly thanks.

I hope there is a fix to this. I would really like to keep that portable encampment in my module. Funny thing is that I have never had it work. I was hoping to find a way to get it to work one day (a future project of mine). I assume it creates a complete campsite on dropping it on the ground right?

There is no point building a module. It has no real benefit.

All you need is to compile scripts only. Checking unused resources is sometimes very useful, but you need to know what you are looking for and be generally very proficient with NWN to fix those kind of errors. Sometimes it can be intented and almos everytime it doesn’t matter.

Hey Shadoow…thanks too for your reply. I always had thought one has to “build” your module after making lots of changes. That is the practice I got into doing. Hmm…I never knew that. I think I found the issue so far with the above question. It maybe related actually to my items 2da…I think I had some columns where words ran into each other without a space…If by adding in a space this fixes the issue I will close this. I really appreciate you guys who know all this stuff helping me out…taking the time to answer my questions. Thanks guys.

It’s kinda true for scripts - after changing an include, scripts that reference it need to be recompiled, which is most easily done by Build with just scripts selected.

I don’t think Build serves any other purpose, except maybe recomputing Challenge Ratings, but I don’t use them anyway.

Thanks again for your help Proleric