This is a thing that has annoyed me for some time now. Sometimes when I choose NWN1 style dialogue, (I actually prefer the NWN2 cutscene style, but I want a bit of variation) at the end of the dialogue it zooms in above the main PC (a lot of NWN1 style dialogues in the beginning of the module I’m working on now doesn’t have this problem). Under “Behaviour” there’s a line called Prevent Zoom. I tried acivating that, but it sadly doesn’t seem to do anything. I wonder what causes it to zoom in and why it only happens on occation. Anyone else experienced this and has a solution?

I did some more investigating and now I wonder if this happens because I run a script on the last node. I guess I will have to investigate more…

EDIT: Nope, that doesn’t seem to be the case, so I have no clue what’s causing this.

andgalf… I can’t replicate this at my end and I tried a few conversations but I’ll keep my eye out for it happening and see if there’s a connection with the various conversations that do it if it happens.

I always play on exploration mode and can’t find a zoom option anywhere in the characters behaviour or the game options apart from zoom speed which is in the options.

I also always play on exploration mode too. In many cases it doesn’t happen but in a few there’s this weird zoom in. I can’t fathom what causes it.

maybe … if your dialog ends on an NPC node, add an extra PC node

or if it ends on a PC node, add an extra NPC node

I think I tried that but…ok, I’ll try again.

andgalf… I found prevent zoom ! If you click it then it says at the bottom ( where the descriptions are ) it’s obsolete, maybe somehow you’ve activated it ?

What happens if you zoom in during the conversation, does it still happen ?

andgalf… I found prevent zoom ! If you click it then it says at the bottom ( where the descriptions are ) it’s obsolete, maybe somehow you’ve activated it ?

I don’t understand this sentence. Sorry. What do you mean by “where the descriptions are”? Like I said in my first post

Under “Behaviour” there’s a line called Prevent Zoom. I tried acivating that, but it sadly doesn’t seem to do anything.

Is this what you’re somehow hinting at?

What happens if you zoom in during the conversation, does it still happen ?

Ok, I haven’t tried that but…if I’m already zoomed in and it zooms in…

andgalf… If we are talking about the same prevent zoom ( which you mentioned in your 1st post ) then it’s in the conversation properties under behaviour. If you click the word prevent zoom, then look down the properties window, at the bottom is the description area which explains about what that means ( this works for all properties ). You might have to fiddle with the property box size to see it.

With the conversation you don’t have to zoom right in, try it half way and you said that after the conversation stops it zooms in above the PC’s head. When I normally zoom ( even fully ) that doesn’t happen, it zooms up to their face not above their head. That’s why I suggested it as a test to see if it’s a zoom thing or maybe the camera totally jumping somewhere weird.

@Tsongo - Thanks for clarifying. Now I know what you mean. Yes, it’s the same “Prevent Zoom” we’re talking about. Didn’t know about the clicking on the name though, and I had to fiddle with the window to really see the description. You’re right, it says that it’s obsolete, so that must mean it doesn’t work, right?

I’ll try and zoom in a bit and see what that does.

I’ll see if I can do a video so you can see what I mean.

EDIT: Zooming does nothing. It still jerks the camera right on top of the PCs head.

andgalf… Then it’s really weird and seems like the camera’s resetting after a conversation and thinks that’s where it should be after the conversation box closes… I’ve no idea where you’d look for that.

Ok. Here’s a video. Minor spoilers for my upcoming module. So for those of you who intend to play it and know they can’t help with this, you should consider not watching this:

This has happened on occasion in my previous modules too. I remember one specific scene in ASW2 where it happened, but I just ignored it then, but now it’s starting to irritate me.

angalf… Yes I can see exactly why that would irritate you, it’s a bit brutal isn’t it. Does it happen if the last line doesn’t bring up the thing that replaces the conversation box ? Although if it’s happened in a previous mod then it’s unlikely that’s it.

Sigh I have tried everything I can think of now and it’s always the same result.

I tried changing in the script:

One curious thing that happened at one time was, that even if the conversation didn’t run, I made some mistake at one test, the camera still jerks around to above the PC. I’m grasping at straws at the moment but…can it have to do with GetClickingObject or GetLastUsedBy or something like that?

I solved it!! And you can’t believe how I did it. I first tried with another dialogue for the door and everything was ok. So I created a whole new dialogue and copied everything from my original to the new one, and all of a sudden the camera jerking was gone. NWN2 is weird!

angalf… I agree with the weird NWN2, I am currently in the process of writing one conversation ( on a companion ) twice because one went wrong but is still associated with one of my testing companions from before I made the new one and changed the conversation tag on the companion.

Remember that conversations can go awry. It is rare, but I have experienced the odd one become corrupted, and have responded to others with similar experiences.

I think you can tell something is off from your video when it appears to have some weird white glitch as it ends, and just before the head issue.

I have found potential issues more likely to occur if I copy and paste nodes in a conversation. I try to avoid that nowadays, resorting to such only if required and testing again prior moving forward.

NB: The copying and pasting of nodes is more likely to cause an issue if there are any actions or other scripts attached to them. Another reason why I now leave such until after I have the main conversation in place.

Rewriting from afresh (like you did) is normally all you can do, as even trying to copy parts from the old conversation can cause it to fail still. If you managed to be able to copy nodes, then you got off lightly.

.DLG files are a subset of GFF-files (generic file format) – it’s entirely possible, even likely, there’s an obscure bug in the toolset-code that writes them … 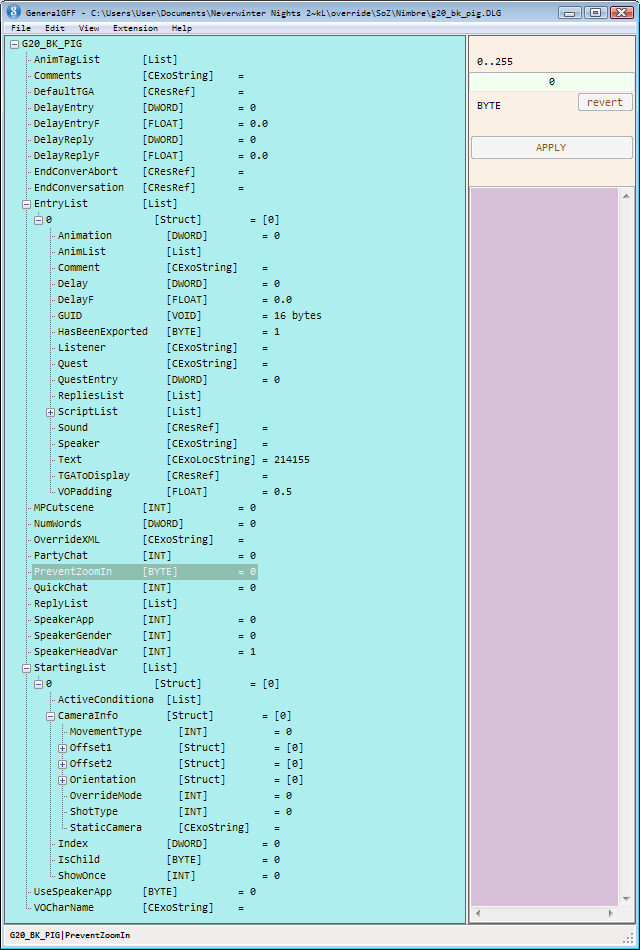 Rewriting from afresh (like you did) is normally all you can do, as even trying to copy parts from the old conversation can cause it to fail still.

The funny thing is that is not what I did. I copied everything over to a new conversation.

And I know that conversations can become corrupt, as it has happened to me before. I just didn’t think that this zoom in thing was a corrupt thing (bug), just some setting I’d overlooked or some other thing.

it’s entirely possible, even likely, there’s an obscure bug in the toolset-code that writes them …

Hmm, that’s interesting. Maybe one should check a dlg file in that way the next time it happens to see if that number is set to 0 or 1? What program do you use for that?