I’ve started down the path of using mounts in SKS (thanks @Proleric for pointing me to those resources) and I ran into an issue with some of the robes from CEP v1. Is this a known issue? Does anyone have a quick fix?

I loaded up CEP v1 into a new module to test and confirmed the issue it related to CEP. This is using all the patches up through 1.69.

Here’s that armor on a horse. 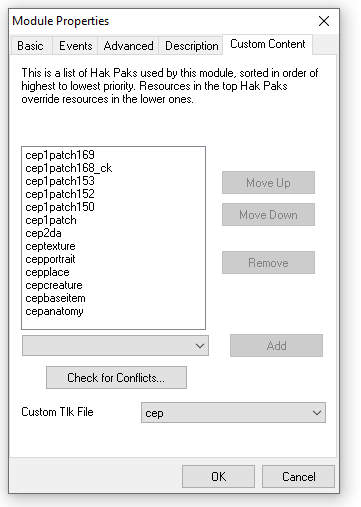 I went ahead and downloaded CEP 2.65, and the same model worked fine on a horse. If I want to use these, am I looking at switching over to CEP 2.65?

For the most part, I’ve been fine working around some of the old broken issues with the Ori haks and CEPv1. But those couple of robes make the light armor so much better. The idea of switching over seems like a good chunk of work. I did an initial test, and it seems like major Ori armor models that I needed were working with CEP2. I suppose I could export all areas and creatures to a CEP2 version and see how that goes.

I could also back out and decide to only support horses for paladins, which would generally be using heavier armor anyway.

Any advice is appreciated. Thanks!

Those robes need to have models matched to whatever the phenotype is - eg. pmh6_robe### - otherwise they won’t be visible when mounted

I did some digging and tried updating to CEP 2. It actually seems to have mostly worked, besides some missing assets. When I get a chance I’ll dig in a bit more and see if I can resolve those.

Hope CEP2 pans out… but if not…

The good news is that you can just take the decompiled robe models for phenotype 0 and rename them in batch using the NWN Renaming Tool (or similar) to change the phenotype digit. That fixes the internal references in the models. The textures can be renamed at the Command Prompt, so with two clicks you have robes for the new phenotype.

Alternatively, you might consider copying the horse phenotype robes from CEP2, though I can’t remember whether all of them are fixed.

Strictly speaking, owing to the way robes are rigged, in theory a robe copied from one phenotype to another might look wrong. In practice, virtually all of them look fine.

The only exceptions I know of are the two long coat models introduced by Bioware in 1.69, which already have horse versions, but can’t easily be used with community phenotypes.

So here’s a dumb question:

I’ve identified the missing resources in CEP 1. They are a hand full of scripts and items. I can export them from cep2da.hak, but I’m not seeing a way to get them into the module. Is there a way to get uti/utc and nss/ncs files into an erf?

I could create them all by hand in the toolset, but it seems like there should be an easier way. Creating a hak for this content also seems silly.

Is there something that I’m missing?

Use the hak editor to create an erf file containing the desired files. Then import the erf file.

But the good news is that I had a chance to look at the missing elements and most of them were a quick manual fix. I’m now running CEP 2 and everything seems to be working. Hopefully, I’ll be able to do some more testing tomorrow and confirm.

Thanks for the help all!

To export to an erf you use the toolset. Use Files/Export and add from the various categories to select what you want to export in an erf.

To create an erf file with the hak editor create a hak and rename it to erf. Basically haks, erf files and modules too are all the same.

Another method can be even quicker. When a module is open in the toolset, its files are in the folder modules/temp0. Copy the files you want to a temporary folder, open the other module, copy the files into temp0, make some trivial change to the module in the toolset and save.

@Kamiryn Ahhh! That does sound familiar now that you say it. Definitely good to know.

Just to wrap up this thread, I’ve gotten all the missing items from CEP v1 over to the new module. Mostly it was the ~20 custom weapons that I just needed to copy down from the +1 versions I had created. They synced up with the instances in the module with no problem once I did that. Otherwise, there were just a few items and scripts that I needed to audit anyway, so doing it manually actually was good. Everything seems to be working!