I imported CEP into my project but I"m experiencing problems with PC parts in the appearance tab, like shoulders, arms, and other similar assets being invisible.

Here are two examples, of the many I have experienced.

Example 1
Shoulders and belt should be empty because I selected 0, but as you can see, in the 0 slots have assigned armor parts now. That is really strange. 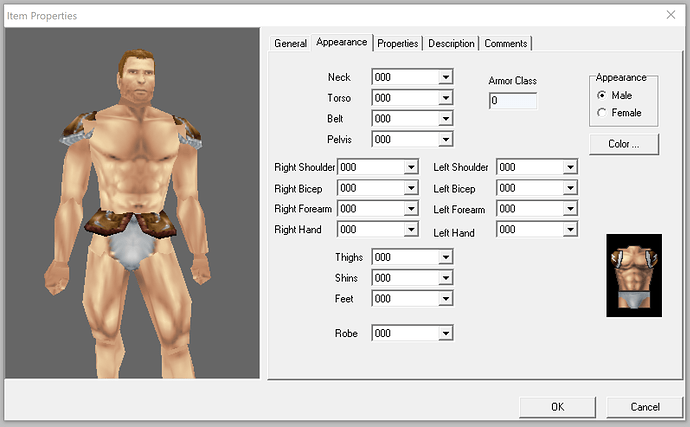 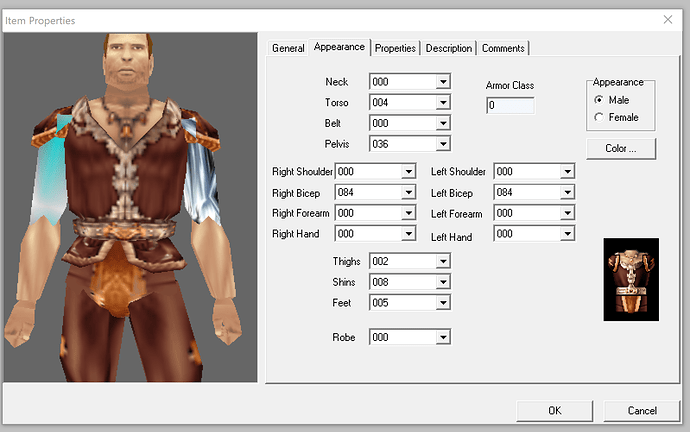 Has someone experienced this or has similar problems.

I don’t know about those in the picture but if you select a part from the dropdown but that part is invisible try changing the gender (box above the colour button). It quite often happens that a part number only has models for either male or female but not both.

You should find that those errors don’t occur in the CEP demo module.

If they do, remove anything you’ve added to override.

Have you modified the parts_xxxxx.2da files?

The toolset sorts those files on the AC field. For this reason, part numbers in the toolset are not the same as the 2da line number.

For body parts other than chest, the AC has no other purpose, so when adding a new armour part, it’s convenient to give it a higher AC than any existing part, so that it sorts to the end.

Chest is a special case. The integer part of the AC is used in game, so, say, 5.001 gives AC 5. It’s best to add all the chest parts you’ll ever need before building armours.

The real problem perhaps is that there’s no texture for bicep 215 (or 84 as it is in the toolset).

Oh, I did not add anything more than CEP following the install instructions hak order:

beyond that, there is nothing more in the mod.

I can’t reproduce the problem in the CEP 2.65 demo module.

I notice that while the biceps part 084 looks OK, if you then change it to 000, the image persists. This just seems to be a toolset glitch, easily cleared by changing gender twice. Maybe the model is indeed flawed.

The model is broken and it’s not just in the toolset. It’s also in game - if you cycle through the bicep models once you reach model no 215 (that is 084 in the toolset) you (or at least I) have that glitch - and it does not go away until you reload - changing armor does not help. Perhaps changing gender would help but that’s difficult in game ;).

Don’t know about the CEP 2.65 demo module but the CEP 2.65 starter module has it too (and all the CEP2 modules I have played too). I’m playing the windows version so perhaps the glitch is not that visible on other versions. I have that quick fix installed but that fix is mostly 2da files anyway.

The patch seems to fix the shoulder / belt problem.

As for biceps 084, I don’t doubt the flaw, just curious that we’re seeing slightly different glitches.

Thanks guys for the explanation