I havent the slightest clue why I get blocked from classing up. 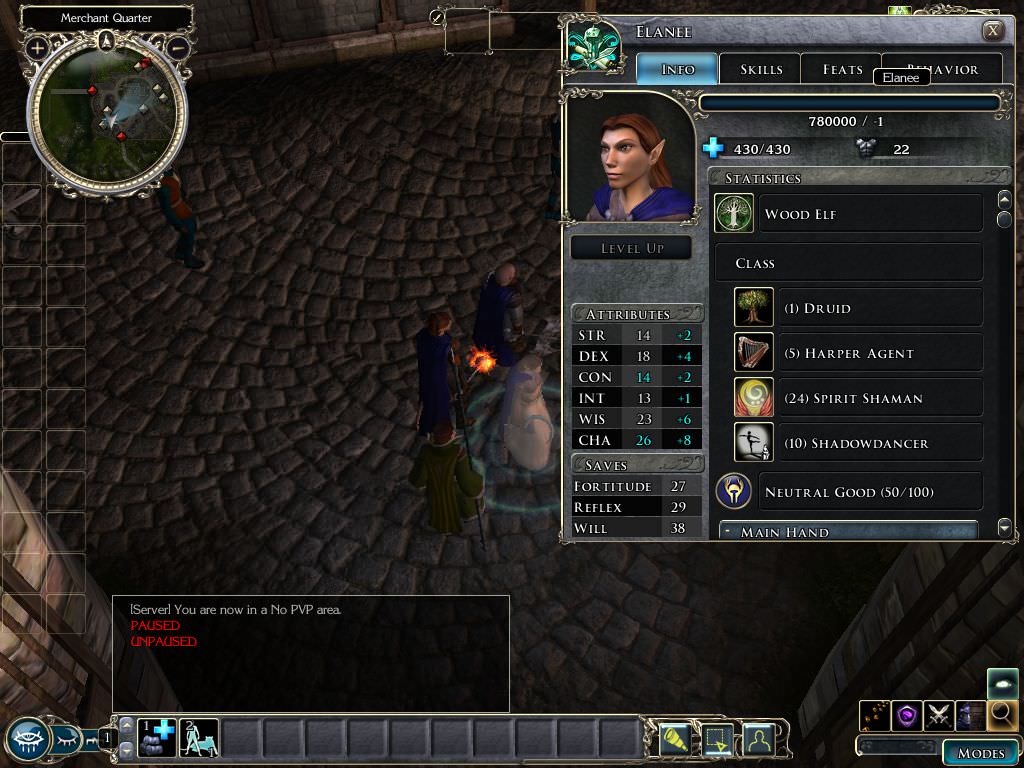 I have not changed the max levels in classes 2da, so what is preventing druid class up?? I removed align and race restrictions already… do I need to remove other restriction too?

If you hexedited level 40 as the cap, you’re already at the max level as you have 40 total levels.

Well no, this was done after doing the hexedit.

But it will not even class up, even after doing -ve xp. So you see the shaman class is rather high.

Well the PC has 10 ranger 10 archer 10 shadowdancer, 8 fighter. Xp is already maxed out, yet cannot class up fighter. The PC is a yuan ti.

Pretty sure legal character and item restrictions are set to 0

The gnome bard is stuck at bard 10 harper 5 shadowdancer 10 trickster 10. He keeps doing the levelup anims every area transition but i cannot class up the bard. - ‘server restriction error’

Is this something to do with racial ECL thingy?

Just a thought but could it be something to do with favoured class? As a Yuan Ti your PC might be running afoul of that. I Don’t know how like NwN that NwN2 is in this respect but this discussion on the BD forums might shed some light on the matter.

Possibly multiclass penalty since I like to level up one class, then the next instead of being even. I’ll fix it next campaign.

But that does not explain why the gnome bard npc cannot progress bard levels after 10.

Also does not explain why the druid npc cannot do druid levels after 1. She starts as a druid for goodness… Delevel using debug mode does not fix her either.

I removed align and preq restrictions for all classes.

Racial penalty are in which 2da file?

How did you get past level 30? I thought that was the hardcapped limit.
(Unless this is an online game session, in that case I suppose it was done via NWNX4).

Check out my topic;

https://www.nwnx.org/phpBB2/viewtopic.php?t=2158 Anyone ever tried this? The hardcode cap appears to be 30 for now. Strange when the exp & xp 2da all have 40 as the last level. Is this the old vault; https://neverwintervault.org/rolovault/projects/nwn1/hakpaks/1692/index3.html some of the links come to this site. Any difference between nwn2 exe and nwn2main exe ?

Its not online, and I believe the char is illegal even…

Trying out a new game where race ecl is set to -2, wonder what will happen

Now why do I get that message? Classes 2da have all maxlevel set to 0, all align restriction and preq set to 0

What else do I need to change?

You’ve edited the level cap to 40, and your character has 40 total levels: Thus it can’t level up anymore, in any class.

The gnome bard is stuck at bard 10 harper 5 shadowdancer 10 trickster 10. He keeps doing the levelup anims every area transition but i cannot class up the bard class. - ‘server restriction error’

I was referring to this one, Grobnar

everytime i try to add levels to bard it will not let me add.

Classes 2da have all maxlevel set to 0, all align restriction and preq set to 0

I dont like to waste levels, eventho thats quite good enough for him…

Guess i’ll have to dig further. 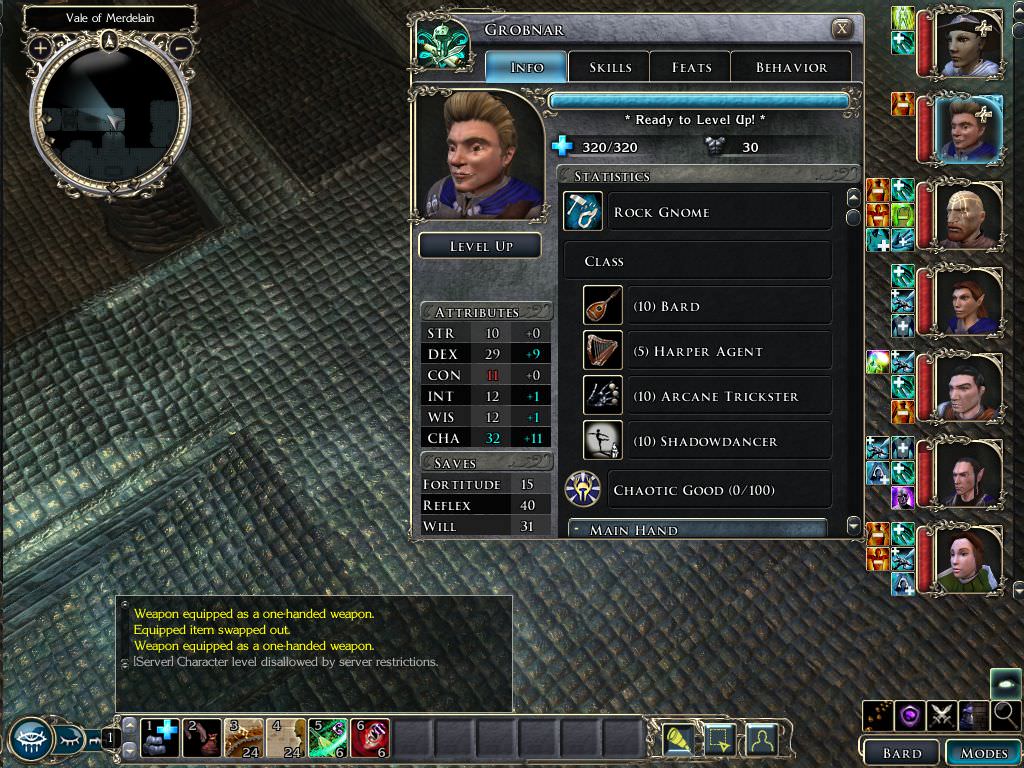 Just tried leveling bard class and got the restricted error

You might need to edit the campaign.cam file for that specific campaign and increase the XP and level cap there. But it’s just a guess.

Did that before starting and it still gave this result.

Classes 2da have all maxlevel set to 0, all align restriction and preq set to 0

What else do I need to change?

Harper epic level is still set to 5 in class.2da? That might be the problem, rise to to 10. (or -1 if you want to make it have as many as you want)
It’s two entries in the class.2da file, try it out. Not only the class level limit, it’s class level imit and epic level. Most PRCS have the same values in both these columns.

I changed bard and shadowdancer max level to 0 in class 2da. and still get hit with ‘disallowed’

I want to put levels into either bard or shadowdancer.

I think I had better go over again;

class 2da - all max level set to 0 which means infinite, all ecl set to 0, xp penalty set to false

Any other setting I missed to allow for unrestrictedlevelup ?

I said EPIC level too, not just only max level. It’s two columns, you have to change both.

Sometimes I am just plain dumb… I’ll get to it, it shouldnt take long.

Yup you were right, that was blocking the levelup.

Maybe add a note in wiki for that column?