Pleased to say I reckon I’ve (just) moved off the lowermost rung in terms of building. Doors no longer flummox me and after a couple of days being brilliantly tutored through very simple scripting I can now hold my head high - well as high as a beginner head can be held when you don’t know any scripting . . .

However, two aspects are still stumping me despite considerable trial and error. I can’t figure how to achieve cliffs ( ie. more than normal two tier raised ground) and castles are really frustrating me. I’ve been playing with the “Castle Exterior” tiles for a day but still have no idea what could join to what - and don’t even let me start on drawbridges! I keep getting red wireframes all over. Earlier, I had a bash at the high forest tileset by Estelindis and it was brilliant. There was a read me explaining what could be attached to what and it was a joy but I can’t find similar for these two items. Might be something stupid I’m missing but I can’t see it.

Any pointer towards a suitable tutorial for either would be appreciated. Just when I was feeling incompetent enough I came across this on YouTube.

This looks pretty awesome ( well, at least the first minute and a half ). The poster says the tilesets aren’t included in NWN:EE but are available for download from the Vault. Does anyone know what they are called ? That would be a start.

This is a little difficult to say, because which tiles are available in a tileset (and which aren’t) depends on the individual tileset. So, good news is - you’re probably not missing anything obvious.

I’m not sure anybody ever wrote guides for building with the individual default tilesets, but I can give it a look over.
edit: Found some tutorial links that look like they include area basics. They are not specifically area-building tutorials, though. :-/ Fingers crossed somebody else has some links handy.

Here are some links to tilesets in the meantime:
https://neverwintervault.org/project/nwn1/hakpak/tileset/mountains-and-more

Thanks, Barbarian. That’s my evening work sorted ! They look brilliant.

The folk here are so talented. I was in my old school the other day ( retired teacher) to show the Toolset to one of my pals, the Principal Teacher of Computing , and he was raving about what could be achieved with it. So much so that he wants me to show it to his Games Design class and talk them through the original tutorial. From his POV it offers everything he wants - design, conversation, scripting but pleasing results right from the start. He feels it could attract some of those he loses in the earlier years who feel bogged down by coding rather than getting the thrill of completing something as eye catching as this. From his POV, the only slight drawback is the scripting using C rather than a more modern scripting language. (I’m saying that but have really no idea what he’s talking about. )

It got me thinking. If we ( ahem, using the Royal “we” now) really want to attract new builders to the game we could do worse than folks calling their local school and offering to show them the toolset. . .

Yeah, thanks. I’d come across the Uni of Alberta one but they start with some pre made castle areas already done to d/load. I’ve got it so I’ll have another look.

Make that guy look at these screenshots:

It’s like gazing upon the face of NWN-areabuilding divinity.

NWN-land is a lovely place to learn 3d modeling, too. And math, in a project-oriented “Now this is why you’ve gotta learn math, kids! You need it for making videogames!”-kind of way. NWShacker made a very nice math functions library over here.

Ok, have a look at their website. No, don’t need to understand German. Just look at the screenshots under the Bilder tab.


@Educational value; feel free to shout if you want a second pair of hands for putting together a presentation or some step-by-step guides, or just for picking out “Need to see!”-material. It’d be pretty efficient to convert your learning process into redistributable/reusable lessons while we’re at it, if somebody may be out to use NWN to teach classes sometime soonish.

Thanks. Will do. You’re also right that I’ve found the best way of teaching is often learning along with the kids ! The buzz of feeding off each other is something I remember well.

It’ll probably be next academic session before we get anything going as they are finishing coursework and heading to exams in May/June but at the moment I’ve been asked to make up a short tutorial on the toolset for a Game Design class (about 15/16yrs) to work through once they finish coursework in a few weeks time. We’re gonna use that to road test the materials we’re making up. The timeframe is only a few weeks at most so it’ll need to be cut down and kept simple ( my speciality! ) although these are kids who have done some scripting.

I’m going with the Plot Wizard for the sake of speed. I know its probably not particularly well thought of but it’s a bit better than I thought it’d be for simple (quick) stuff and introduces them to the various aspects of the toolset, including the idea of how stages of a quest can be controlled by conversation. I particularly liked the Plot Nodes section which really forces them to think in stages and prerequisites for conversations.

I’d like them to get the same buzz I got the first time at seeing a beautifully textured landscape for their game quickly which will hopefully draw them in to wanting more. Anyone who finishes can then improve their module by starting to look at the “real” sections such as scripting, conversation editor etc. Longer term, the original Bioware tutorial “Fern” is pretty comprehensive and we’ll be looking at that.

So, yeah, I probably will need help at some point and thanks for offering. An initial presentation might be a thought. It might also be an idea to get others to have a look over materials for correct terminology, blatantly wrong statements etc.

Yeah, definitely set up a thread for the tutorial.

We can collectively pitch in.

There are some neat scripting projects possible to set up that I could see being fun for a class, too, when they get to that point, like bouncing projectiles off of barriers. 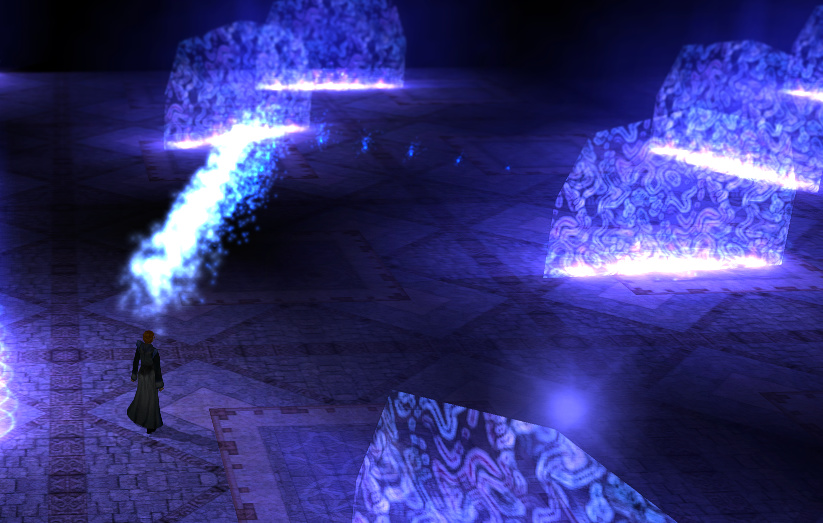 … or first person camera perspective, with objects reacting to being looked at or looked away from (creatures that teleport behind you when you’re not looking at them, for example. Weeping Angels!). 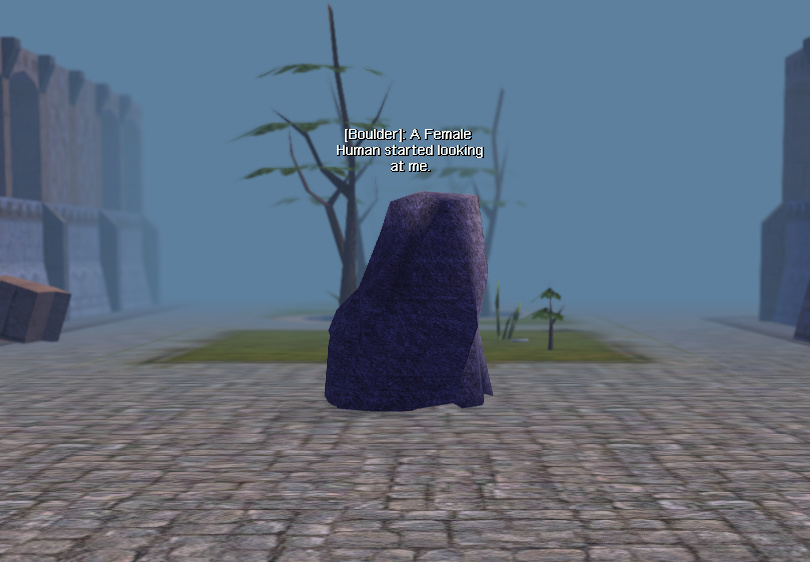 ::kinda low-key wanting to be part of that class now

If I were a kid I wouldn’t hang out with NWN Toolset. The scripting engine doesn’t even allow pointers!

If I only knew what that meant I’d laugh, Kinslayer.

So to return to my current mental block from the first post, can anyone help me with how to place a drawbridge using the castle exterior (rural) tileset? I’m starting to think I’d be quicker building the real thing . . . 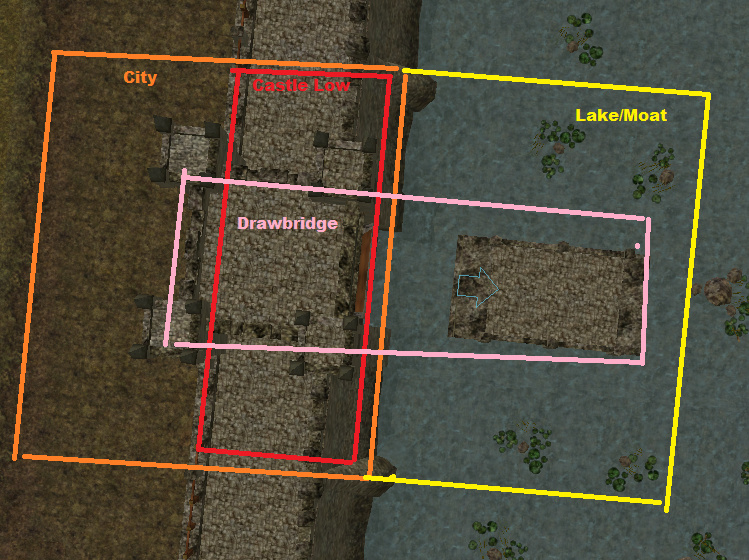 Mentally blocked no more ! Thanks again, Barbarian. I am, however, left wondering why I was unable to work that out for myself. I think the overlapping bits were beyond me.

Looks good. Spurred on, I’ve even figured out the cliffs and the steps. Small question. What causes the tile to suddenly disappear as you change the angle of view? I’ve seen it happen with tops of trees but generally with haks. Is that normal or is it something I need to do?

It is pretty well-hidden.

FWIW, I had to click around a bit before I found it, too. When this kind of thing happens, taking a close look at the tile group and trying to figure out which terrain types it’s meant to be built into helps. You can see the brownish floor behind the drawbridge, as well as that there is some kind of stone wall to either side of it, and the end of a bridge at the other end. At that point, it’s just about figuring out which terrain types in the tileset look like that.

I’m not a tilesetter, so view the following with a healthy degree of skepticism, but: AFAIK the tile models themselves can (but needn’t) be set up split into two parts, one of which will fade away when the camera gets close, if the player has turned the setting for this on. It’s in Game Options; Hide Second Story Tiles.

So some custom tilesets have fade-away-parts (second story tiles), and some of them don’t. It depends on how the person who made the tiles set them up, and I think setting up non-fading ones likely takes less work than crafting them in one piece does.

Thanks. That’s really interesting and makes complete sense to me - not that that’s a ringing endorsement.

The further I get into this toolset the more amazing I realise it is.