I found a perfect reindeer here in the vault, but there is a glich I don’t understand.

The crature is killed on spawn, and the script fires or there were no puddle of blood on the ground. It has just to act as dead prey of some carnivore monster.

On the left, the deer(s) is still standing. And there are still the immobile ambient animation. It’s the original Bio “Frozen wastes” tileset.

The smaller picture on the right shows the expected behavior (rural tileset), the reindeer is lying on the ground.

And now I’m out of ideas … It seems, that the animation which is shown when the animal falls to the ground is frozen in the “frozen wastes”.

Does anybody have an idea what could cause the different behaviour in different tilesets?? 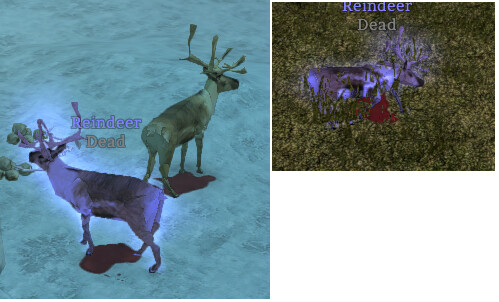 I don’t understand your explanation well, but I have seen this even with vanilla models - it however happens randomly and very rarely, possibly when npc in in middle of specific animation when she gets killed. I never investigated deeper as it has no impact on gameplay…

Of course your issue might be a bug in the model itself.

I don’t understand your explanation well,

Is there any way to alter the model to stop the default animation (such as moving the head)?

then i suppose there are missing animations

check if that model has supermodel set to the same value as vanilla deer, if not try do that, if that won’t help (it should) then additonally check the model for any custom animations it might have and delete them

then i suppose there are missing animations

Thanks for answering. The reindeer has no supermodel. There are probably no animations missing.

Seemingly it works the grassy terrain and not in the Ice waste. But the things became more wreird. I left the rural area where the deer iy lying dead and returned. It was standing again!

How does it work, that the engine turns off any animation, if a creature is dead?

Like @Shadooow says, this is a known engine bug, but normally very rare.

Since it doesn’t happen with the deer, I guess it’s a fault in the reindeer model?

Did you try the Clean Models utility?

Can you tell whether the reindeer model is based on an official one, e.g. deer, white hart?

Perhaps you can compare the structure of the models?

Sometimes a quick visual check of the uncompiled model will reveal obvious garbage (random characters) which EE doesn’t tolerate as well as 1.69.

#NWNExplorer will show you an overview and detail, or, if the models are fairly similar, WinMerge Compare will highlight differences (though clearly most of the geometry will show up as different).

I’m no expert here, just sharing what I know…

Using Clean Models is something I did not do so far.

Anything else I did, including comparing the structure. It has much of a dear but the author tossed out the supermodel and merged the animation into the basic model.

Using Clean Models is something I did not do so far.

Well now I did, and it turns out, that there is a duplicate animation (quite different content) Now guess which is the correct one

I think I’ve come to an end of things which can be done with simple tools. I’ll try to find a 3d-modelling expert, who can have a look on it with 3d-modelling software.

Thanks to all for help.