I wonder if anyone else has run into this fatal bug in Neverwinter Nights 2.

I just started Act III, and upon leaving Crossroad Keep after selecting my companions, only 1 or 2 of them would follow me after making the transition to the new area. The others would just stand there and do nothing. If I select one of them, I could move them, but then my main character (and usually another companion) would not move or do anything.

I’ve gone back to previous saved games (having to go through all the cutscenes and fights at the end of Act II and beginning of Act III, but the result is always the same. No matter where I go after leaving Crossroad Keep, my companions will not follow me and just stand around.

Has anyone encountered this problem, and is there a fix for it?

I am stuck at this point unless somebody out there can help me!

Is this your first play through? What do you have in your override?

Has anyone encountered this problem, and is there a fix for it?

I have, but not in the OC.
Actually (don’t ask me why, I still don’t understand how it happened), they were all set to “puppet mode on” (i.e. they wait for the player to issue them commands).
Just check their A.I., and switch it off again if it’s on.

I put something in override that I downloaded from Neverwinter Nexus that upgraded Neeshka’s tail (looks a lot better than her default tail). I tried adding new portraits from another mod but I couldn’t get those to work. I downloaded them but then they disappeared off my hard drive - don’t know where they went but they didn’t get into my override folder. I am content with the portraits that came with the original game.

Thank you. But, I tried that and it didn’t work.

Thank you for your reply! I will have to try that.

Question 1: By AI I am assuming you mean “puppet mode” in the Behavior section of the character sheet? Or do you mean something else? I’ve tried toggling puppet mode on and off, but that did not seem to fix the problem. But I haven’t yet tried broadcasting “follow me.”

Question 2: Okay, I’m not real tech savvy. So, how exactly do I go about “broadcasting” follow me? Where in the game is there an option to do that?

I’m used to the companions just following me wherever my lead character goes, and if I want them to target a particular enemy or cast a particular spell, then I click on their portrait to control them, and then go back to controlling my main character. I don’t know how to “broadcast” commands to affect all the companions at once. I assume there is a way?

I thank you very much for your help! 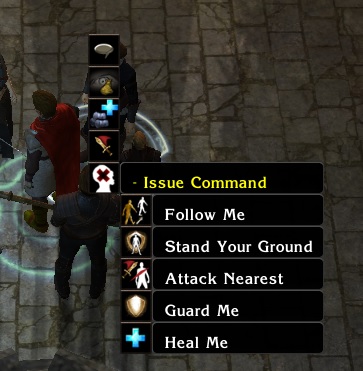 Wow! I didn’t even know about that option at all!

Now, if I tell a character to follow me, will they continue to do that until I tell them to do otherwise? Do I need to tell them that each time I enter a new area, or will they remember that after transitioning to a new area?

They will remember. However, when you enter a fight they won’t attack automatically, then you will have to switch to Attack Nearest. Usually I have the Attack Nearest as default.

Stand Your Ground is also quite usefull if you don’t want them to run into a fight but to stand still in one place.

OK, so if I get them to follow me, I still need to command each companion to “Attack Nearest”? Will that remain the default until I tell them otherwise? Also, what about Sand or Qara – if I want them to cast spells instead of attacking and getting their butts kicked in a melee?

As a rule you don’t need to issue any of these commands that often, but if the companion are stuck, can’t move for some reason, Follow Me is very useful.

OK, thank you for all the help. I will have to run the game and try those things. I was really stuck and about to give up. I’ll let you know later if it worked!

It’s been so long since I played the OC, I don’t remember, it was back in 2006 within the first week of the game’s release, so I don’t remember exactly about Sand or Qara’s behaviour.

OK, so if I get them to follow me, I still need to command each companion to “Attack Nearest”? Will that remain the default until I tell them otherwise?

Yes, that’s correct. They will even point out to you if you’re in a fight, and you’ve got Follow Me selected, they will ask: “Shall I attack?”.

A big “Thank You” to everyone who responded to my question and helped me! My game is now fixed and so far seems to be running smoothly! 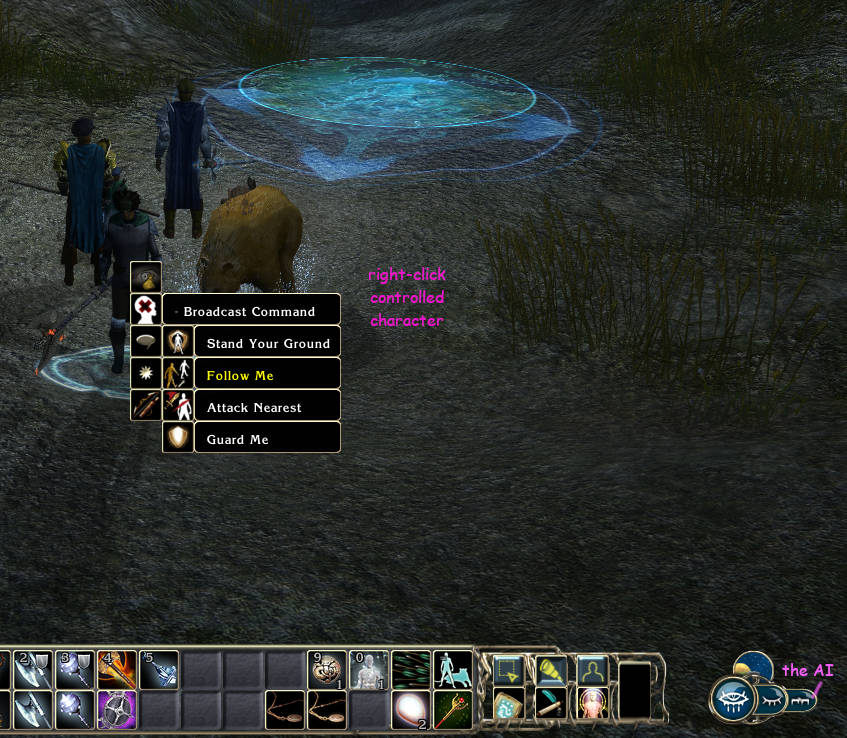 This bug happens a lot to me. There is an even more serious bug where your character can’t move. The only way to fix that one is to delete the nwn2 or nwn2player file in my documents Can’t remember which one. The game will recreate it when you start up the game again. Back when the game was still being patched they would never fix this.

I often encountered this error in the campaign finale.
you have already been given good answers, also try to save more often and if one save does not work, then the other may work. You can also start the game the next day (I don’t know how this is connected but it helped me)
here is another file that can help
https://neverwintervault.org/project/nwn2/other/nwn2-client-extension
(it fixes many errors)