Something occurred to me as I was writing some conversation scripts for my next module … and it raised the question about what style of conversation did you (as a player) prefer in your RPG. Let me explain …

Option 1 tends to give the PC more “control” over potential responses (via the background selected for them by the player), as opposed to option 2, which thinks less about a PC’s background traits and more about the player’s preference of approach according to a PC that they may control.

I hope I have managed to describe the differences well enough to have people respond with their preferred style of play. Of course, my aim is to provide a selection of both styles in the final module build, but at this stage, I was curious to know if players had a conscious recognition of the preferred style of conversation when playing their game.

Thanks in advance.
Lance.

Personally, I believe that we must “force” the player to play/act his character. A barbarian with an intelligence of 8 and aggressive background traits shouldn’t be able to speak like a Mage.

In the nwn1 Witch’s Wake module, Rob Bartel did some thing like this. He still gave the choice, but rewarded with XP those who roleplayed their character and the ones who searched for their own background story.

But doing all this is a huge task in itself (writing dialogue and scripts).

But doing all this is a huge task in itself

Conversations (for me) are a massive task … period! (E.g. I am just adding to a near 3000 word conversation for one NPC.)

The problem I am facing, however, adds to that potential complexity, and is why I am trying to see what players may enjoy most. For example, take your above example …

You state a class (Barbarian), an attribute score (intelligence) and a trait (aggression). Now, as a builder, which would take priority in a check? It could be argued that it all depends on the situation, but here is my dilemma …

These are all questions that I find really interesting, at the same time, I do not know if it is possible to integrate all these conditions for text to appear as possible choice. (green section in conversation editor).

As a Table Game Master, I would not want a player who interpreted a brutal and unintelligent barbarian to play his character otherwise.

There are so many things that are not used as a condition in conversations (skills, ability, backgroud traits, alignement, etc…).

SoZ also tried to remedy this a bit in its dialogue options to an extent. You will notice that they have selected certain conditions which come back quite regularly.

Even the “Charm Person” spell should be consider as possible dialogue option for those who can cast it (like Jedi Mind trick).

There so much possibility to chose.

These are all questions that I find really interesting, at the same time, I do not know if it is possible to integrate all these conditions for text to appear as possible choice. (green section in conversation editor).

Yes, it’s possible, as I wrote a script earlier (at the time I posted) to do this. I also updated it to “group” some backgrounds that were similar to reduce the amount of work per conversation in some situations.

How much use I will have for it, I don’t yet know. It depends on what kind of response to this post to some degree.

Here is a screenshot showing a PC with the devout background feat response. In this case, it was part of a group check I called “peaceful”, which covers the devout as well as a couple of other backgrounds. There are a total of five groups for different responses (so this is one of five possible responses for this conversation), but the check can also check for completely independent backgrounds: - 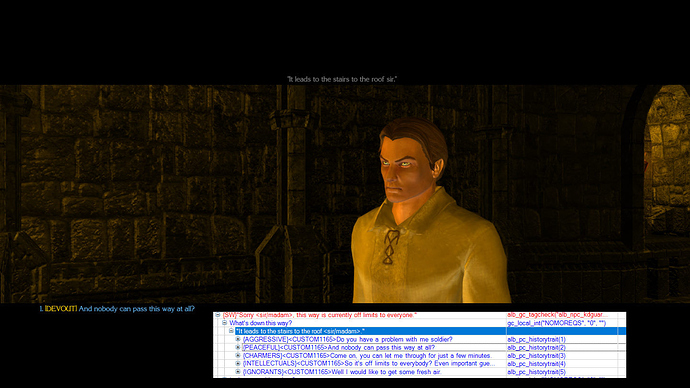 Let me know your progress on this. Especially the selected parameters (conditions), because it is something that interests me. I will not put them everywhere, but enough to say that they are present in my modules.

I believe that we must “force” the player to play/act his character.

Say said barbarian (for whatever reason) has taken the devout or farmer background, does this now play as a priority

Regarding the background traits, I tend to consider they give “bonus” conversation nodes.

Basically, I believe role-play should be rewarded (the difficulty being how evil/law and chaos/good are interpreted…)

Regarding the background traits, I tend to consider they give “bonus” conversation nodes.

Basically, I believe role-play should be rewarded (the difficulty being how evil/law and chaos/good are interpreted…)

I agree about the “bonus” lines. It’s just that I recognise they only “exist” as such according to background feat and if we add them as an option. i.e. These conv lines should only be visible to PCs with that background trait. I suppose we can just assume they are “flavour” lines for the PC being played.

Other than that, we still offer the usual conversation options.

(The Scroll has an ESSENTIAL update after discovering a broken On Enter script since v1.06E.)

There are so many options available and it is so interesting.
But it takes a lot of patience. @Lance_Botelle seems determined to do it for its module, but personally I don’t have this patience to do it for all conversations. My strength is not there.

I remember that in the very first release of the OC of NwN1, even the writing of the texts according to the intelligence of the characters was displayed differently. Example:

Intelligence (10+): Can you show me the items available in your store, please?
Intelligence (9-): Me want to shop…

This kind of work is easier in teams where the work packages are clearly distinct between each members (area builders, scripters, writers).

seems determined to do it for its module, but personally I don’t have this patience to do it for all conversations. My strength is not there.

No, I could not possibly do this …

It would be great, but a physically impossible task for one man I suspect.

I will simply make judicious usage of it, so it adds another element. I’ll see how it pans out.

After experimenting where best to use this, I decided I will use it in some conversations as a bonus for players who have taken a background and want to roleplay their PC according to such.

There may be good or bad consequences to such, but I will occasionally give a small XP bonus (or glean a little more information) just because they are trying to play according to their chosen character background.

These are all questions that I find really interesting…

I just want say that I agree that this is a very interesting topic, and very ambitious way to go. I commend Lance for trying this.

Let me explain: do I want the character to be able to complete the mission?
But if the mission is to solve the sphinx’s riddles, can a character with 8 intelligence do it?
Probably not.
But what if it can’t do that what happens? Has the mission failed? Is the adventure over?

Most of the time, my build mandate is that every mission that a PC picks up should be completable by every PC type, no matter their stats. They may find it more difficult or have to approach it a different way, but it should be possible. I would not want to penalise a player playing a non-intelligent barbarian if I can help it.

That said, in an extreme situation, I include the caveat that a player may have to pick up another companion or create another PC to add to their party if absolutely necessary, but this would only likely occur if, like in the example of your barbarian, it was currently the only PC they had built to play the campaign. i.e. If they had a single PC party, then, and only then, might a situation require somebody else to be involved. However, it would still be a case that my module would allow a player to be able to handle every situation as long as they employed the correct PCs.

I have one situation of this in The Scroll, where (iirc) it becomes a requirement to cast a particular scroll. If a player has not created a PC to be able to cast a scroll, or yet picked up a companion who can, then they are warned that they would need to “gather an ally” at the local tavern to help out with the situation … and is where the player can create a new PC to do this task … if they did not want to use a companion that may have been able to do the same that is.

So, going back to your example, if the player had no PCs with the abilities to answer the riddles, then there should be either (a) an NPC who the players may find, interact with and help them with it, or (b), a way for the player to be able to build and add an intelligent PC to their party.

IOW every item on the critical path has to be achievable.

IMHO skill and ability checks should be about expanding the player’s options (skill check to avoid combat vs doing it the hard way) or injecting color, immersion, and novelty into the experience.

Not every class or character build needs to have an alternative at every encounter. But unexpected choices via a stat check or convo option inject surprise and excitement back into the game.