It creates two illusionary walls to choose from:

I could add more…but for now those are two

Spells and placeables work fine. I just checked the plot box so that the placeables can be walked through. So looks real, but is an illusion.

The main spell and other two have their own icons. Like the Protection from Evil/Good Spell

The Main spell: “Illusionary Wall” is connected to the other two radial spells. All good

I want the spell to be like the Protection from Evil/Good spell where only the one spell shows up and the other two show up after choosing the main spell…you guys understand?

I went over the lines…and everything seems ok…why are all three showing up instead of just the main one?
spells.zip (56.0 KB)

See the pic …all three show up. I just want the first one to (The white Wall) 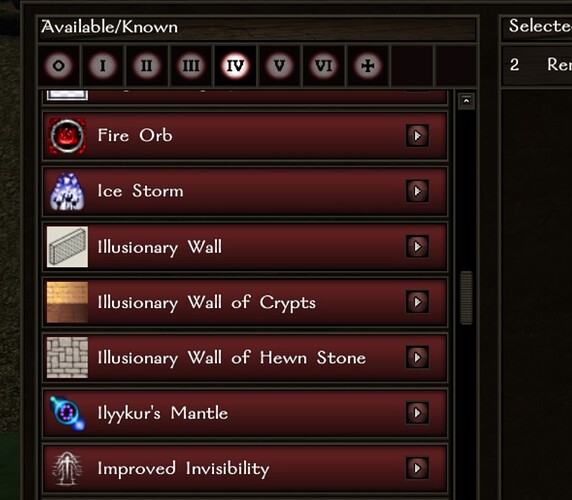 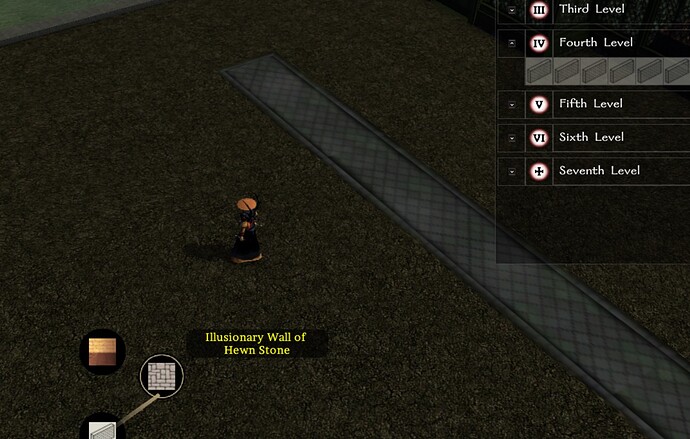 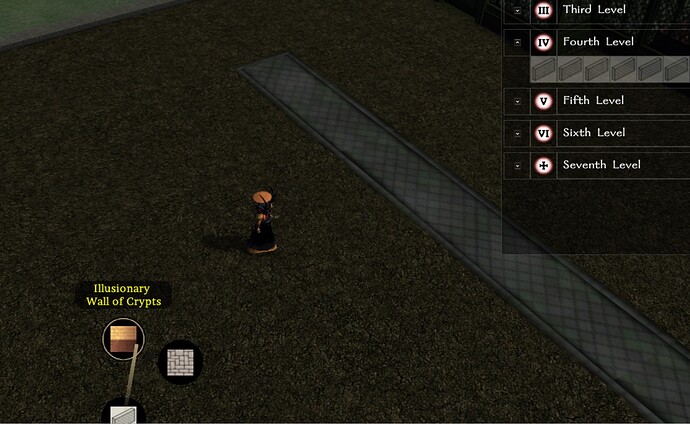 Without looking at your spells.2da, the spells need to be consequtive and the sub-spells need to reference back to the parent spell’s line. spells.2da - Neverwinter Nights 1: EE - nwn.wiki isn’t gospel, but an effort was made and should have the info you need to resolve that issue.

In general nwvault discord would probably be helpful to you, for example, I’d have been happy to script any of your other spells (excepting scry one…that’s really tricky to do base game in .34).

Thanks Lokey for replying.

I don’t go on Discord…maybe I should.

I find it helpful here where I can cut and paste stuff. I’m an old-timer…lol

Did you see the zipped spell 2da above I posted. Can you take a look at it. I need fresh eyes on it

I find it helpful here where I can cut and paste stuff. I’m an old-timer…lol

You can cut and paste stuff in the same way on Discord as on these forums. I use both Discord and the vault forums. People are always really friendly and very helpful. I’ve received stuff (new armors, faces or animations) on Discord (The NWN2 creator channel) I would have never have had if I was only here. I really love this community!

Thank andgalf for your kindness and advice.

But, I don’t really have a desire to go on Discord. I’m good here on the vault. Glad the community helps each other there. It’s just easier for “me” to do it here.

Can you take a look at the zipped spells 2da I uploaded above and let me know why I see all three spells? A second set or third set of eyes are always nice. Ideally it would be nice of these illusionary wall spells could make those in a certain radius make a save vs “Will”. If failed the spells makes a real wall…if they save then the wall is an illusionary walk through wall.

Would it be possible to script something like that? Maybe you can ask on the vault for me. I would like to release this spell for others to use too.

If save vs will …create illusionary wall

But I wonder if one could script that as the spell is not cast directly at a PC…it would be an area effect maybe? How would one write this?

I feel like this is way beyond what I am capable of. I mostly deal with simple scripts in my modules. If I need something advanced I’ve always asked others here for help (travus and kevL_s are real script wizards when it comes to NWN2). And here you are tampering with game rules and whatnot…I have no idea about things like that, sorry. I’ve just never been that interested in deep D&D stuff. For me it’s all about story, mood, characters and maybe some cool animations and cutscenes, when it comes to exactly how all the D&D rules stuff work I couldn’t care less. That’s why all my modules take place in my own custom world.
Remember that I am on NWN2 Discord and I doubt they could help you with this since this is quite a bit deeper with 2da’s combined with scripting. If you really need their help, even if you like it here, I suggest you go to the NWN1 Discord channel and ask.
I could however (probably) have tried to help you a lot better if you created stuff for NWN2. Then I could test a lot of stuff and do a bit of trial and error with scritps and so on…but since you’re on NWN:EE there are quite a few things that differ now that we’re not talking simple script stuff anymore. I’ve been baffled by, when I’ve tried to help people with NWN1, that stuff I’ve gotten familar with, and that I really like, with NWN2, just doesn’t work with NWN1.

EDIT: I’m trying to make sense of your 2da file. Never looked at spells.2da before even for NWN2. I see that there are rows/lines for Bard, Cleric, Druid and so on. Is this what level they need to be on to be able to cast the spell maybe? I’m just guessing. In that case it seems that the three last spells in the 2da, which I guess are yours, require level 4 as a wizard? Then it seems logical that they all show up for a wizard who is level 4?

The Main spell: “Illusionary Wall” is connected to the other two radial spells. All good

What does that even mean? I have no idea how you connect spells in either NWN1 or NWN2, sorry.

Yeah I keep forgetting that you are NWN2 bud…lol…you have just been so helpful with my scripting.

In NWN:EE you call only upon the spell Protection…then it sub-radials where you can pick either protection from Good or protection from evil. Same effect I am trying to replicate but with calling two walls from the main spell Illusionary wall…if that makes sense.

Ok, I think I understand. I have no idea how that thing works though. Sorry.

Trying to think if I could make somthing with the save vs will thing…but I should probably go sleep now. It’s way past midnight here where I live.

Dude…you did it again…you saw something I missed…you fixed it for me. You were right. I had listed the spell level for the other walls when they should have just been ******

Only wish I could have made the spell better scripted

If save vs will …create illusionary wall

I mean…ugh, this is a bit too hard for me…something along the lines of this perhaps, but you need way more specific stuff. Try Lilac Script Generator for this perhaps.

I tried with Lilac’s…

So create and destroy placeable walls like those in the

Put your chosen wall in an area that is inaccessible to the PC then use SetObjectVisualTransform() (online Lexicon page) to move the wall’s visuals to where you want the illusory wall to be. Remember SetObjectVisualTransform() only acts on the visuals, which means that given enough distance between the wall’s real location and its apparent location, your PC can walk straight through it.

I got the walls working …script is good…they appear and they can be walked through. I tried lilacs script generator…but it has limitations…well maybe it’s me…lol

Thanks andgalf…will try this script