Creating new item categories in item list, how can i do that?

Hello everyone and thanks for being here.
I have three main questions.

Thanks for the reply Jasperre.
I would like to understand a few small things, just for more safety and not to break anything.

In practice, here with GFF I have to open the palcus.itp file and add “struct> list> struct”, but how do I do it specifically?

Weapons> Throwing are listed under category -1> MAIN> 8> 10
It was too complicated to add a new struct under 10, so I decided to create a new category, under Weapons> Grenades, no longer Weapons> Throwing> Grenades
So now I’m in -1> MAIN> 8> 12 (my new category)
Once created, if I click it with the right button a curtain opens where you can read the one written in the image posted below. (Red box)
What should I do to name the new palette as I want? I want to name it in Grenades.
Furthermore, observing the other categories you see two items: ID (Blue box) and STRREF (Green box)
I assume that I will also have to add them under category 12, which is the one created by me.

What I want to see when the job is done is: 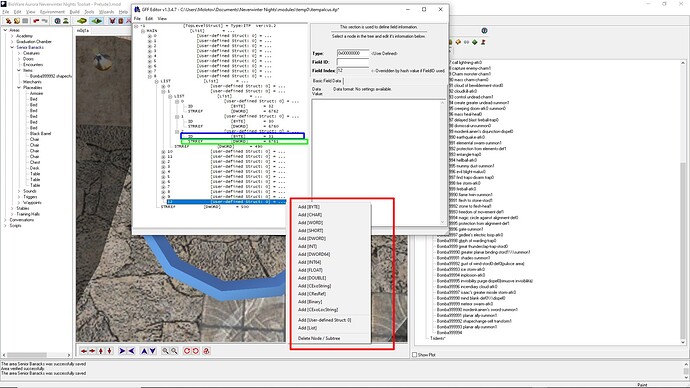 The struct is pretty simple. Just copy the layout of an existing one and edit to suit, the layout is just structs within structs as far as I remember. The data format is here: File Format Specification (Bioware) - Neverwinter Nights 1: EE - nwn.wiki which has examples in it.

You can just have a NAME field of CExoString type, so don’t need the STRREF at all.

Thank you very much, I’m already checking it out as I finish making the last few grenades.

My friend, I have read two different guides, both the one you recommended and this one (Adding Toolset Menu Categories | PDF | Menu | Computer File) but it is difficult to understand and too long as a process, especially for a newbie like me.
Also, as I am not a native speaker of English, I struggle as you can imagine.
I spent more than two hours reading and trying and I couldn’t do anything

I GIVE UP hahahahaha!
After all, it was just a matter of order, adding a category of objects just to make them more tidy.
I am not able to do this unfortunately, because although I have tried to read the procedure, in the end I do not know which files to modify or how to modify them.
If some kind soul among you could help me, perhaps already preparing these new categories of objects, I could rename all the new grenades in English, recreate them all from scratch (because I named them all like this:
Bomb1
…
…
Bomb9
Bomb90
Bomb91
Bomb92
…
Bomb99
Bomb990
Bomb991
…
Etc) and I did it to keep them tidy while I was working on them and not Bomb1-Bomb10-Bomb11 -…- Bomb2-Bomb20-Bomb21-etc.
I did this so that it was easier for me to have them in order as I created them.
If anyone helps me I will tell them how to name the categories and subcategories, then I will download that file, arrange all the grenades in order and finally create the ERF file to publish to the Vault.
Alternatively I will soon publish the ERF file as is, with no new categories and subcategories. I’ll just sort out the grenades through the number of spawns with the console.
Example:
Offensive Grenades-Single Creature Damage:
bombai1-bombai2-…-bombai11-bombai12
Offensive Grenades-Area Damage:
bombao1-bombao2-…
Defensive Grenades:
bombd1-bombd2-…
Summon Grenades:
bombe1-bombe2-…
Stunning Grenades:
bombs1-bombs2-…
Trap Grenades:
bombt1-etc
And so on for the other categories that I have not listed.
Now I concentrate on testing all the grenades, then we will see how to proceed.
I really hope someone will help me create those categories, because I’d rather do a tidy job, even at the cost of recreating all the grenades again

no problem.
Please forgive my inexperience in NWN modding, which in my opinion is very complicated compared to many other games that I have modified in the past and I thank you for the time and energy you have spent so far to help me.

I’d not have a custom palette included just for more grenades. Instead just put them under the standard category. This would save a lot of effort hacking away at palettes.

If you really, truly must do the categories, I’d suggest looking at how the CEP did it.