I am struggling to use the Appearance Wizard (again). I know it is a known issue, but I was wondering if there was anybody gifted in that area of coding that may be able to build a suitable replacement?

EDIT: Even when I have it “working”, the colours are not set … even after the copy and paste of altered NPC trick. ie. Colours set in the “Armor Set”, but not on the in game character.

I know Grinning Fool had built one at one time. (Make sure you get the latest version, as there are two available and one is incompatible.) Here is a link to that: https://neverwintervault.org/project/nwn2/other/grinning-fools-creature-creation-wizard (This also only does racial appearance and not clothing. It would be great to get a random racial appearance and random clothing appearance on a plugin wizard too.)

I also tried applying this fix, but it does not work as my window freezes completely: Appearance Wizard & Windows 10 *FIX*

Anyway, I offer it as a suggested “request” if anybody is able to put something together that may allow a simply randomisation of faces/outfits for an NPC. 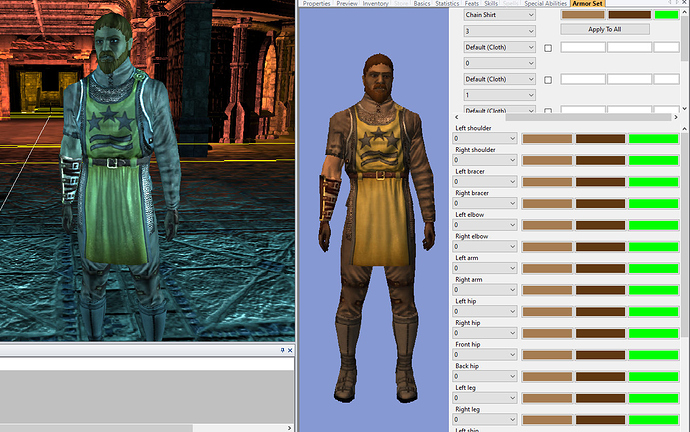 EDIT 2: At the moment I am using my own advise (from years ago), but the problems with general viewing (after changes) is extremely difficult with NWN2 as it currently stands: https://worldofalthea.blogspot.com/2008/01/armour-appearance-answers.html

i’m working on the CritterStatsEditor … but. “Stats” is intended to mean: “not Appearance”. Because I don’t have a clue how to render a model.

( I’d likely end up merely taking screenshots of bodyparts and displaying those as choices, probably. )

While, eventually, it could be coded in (my code is open), maybe someone else has an immediate solution …

and uh, it wouldn’t work seamlessly with the toolset anway

( hm i should convert my project to a toolset plugin …)

I did wonder how your latest project and skills may reflect on this kind of thing.

As you say, maybe someone can work alongside your own … or work out what GF did in his and expand on that.

I always use Grinning Fool’s Creature Creation Wizard you mentioned. I haven’t come across anything else that works as well as that for building characters.

However, you might want to check this out (not an appearance wizard but still…). I’m using this in my latest module. Lots of random npcs: https://neverwintervault.org/project/nwn2/prefab/creature/custom-npcs

I checked out the link … It could be useful for some of my other situations.

I think we could certainly do with a random facial/clothing generator though, as it would help get away from every thug or soldier looking the same.

I agree. Hopefully someone skilled at this sort of thing sees your thread here at the forums and creates some new plugin…

I am really struggling to get any results with this at the moment … often (always at the moment) crashing the toolset. Even the alternative does not update the “doll” image with details changed. I am having to cut and paste versions that have minor alterations just to see the differences.

So, this is a BUMP of the post in the hope someone with the ability may be able to help with this sorely lacking toolset utility.

I still use the appearance wizard, albeit with more difficulty. It rarely crashes for me I think perhaps because I minimize mouse movement when it is coming up. (The refresh mechanism may be buggy when the window is first being drawn, so I try to keep the cursor out of the window.) Sometimes it can require several minutes to update properly when it first comes up, so I have to be patient. Flipping between the panels helps updates to show up, when they don’t appear by themselves.

For the blueprint, setting the base armor color in the Properties tab works better than doing it in the Armor tab.

Woh! I am sure going to check this!