I have moved my Bioware Creature Override to NWN EE. It has been made into a hak format instructions are on the entry.

I will be releasing a small update this evening. It will contain the following:

The two new skeleton creatures are the skeleton Commander and Skelter pictured below. The skelter was a request from Tarot Redhand and will also make an appearance in this months CC Dark Fantasy.

I will be releasing another small update tomorrow which will contain the following:

Not sure many are following this but if you get around to checking it out, please post bugs or comments. I am open to recommendations for some additions to the project as well.

Why not look through the various custom content challenges? There are some really good looking creatures in there. Grab a copy of the CCC Catalogue if you haven’t got it already. It is up to date and there are links to all of the ccc project pages.

I have been adding some of the CC challenge content. I know I have added

I have gone and cleaned up the models with my process and added them to the Creature Catalog. I have downloaded your CC catalog and am making my way thru it.

Like what you’re doing here. Have you thought about doing a Nasher repro for your setup and releasing that to the Vault as well. It would save a lot of time for Builders (myself included) that are working in SP and cherry-picking their custom content.

Real new to EE have not used Nasher yet, but with some documentation, I can understand its a definite possiblity. Let me make sure your talking about a repository for all the creatures so builders can pick and choose the creatures they want available to use in there projects.

Yup, exactly what I meant. I’m using Nasher myself to pack my module hak. Makes the work flow much better. I dump a bunch of stuff in my override, make adjustments as needed, and once finalized move it to my Nasher library, click a BAT file, and build a new version of the module hak.

Working on my next update should be available in a couple of days.

New update will be up tonight, which will include:

Gold Half Dragon by Ryuujin
Silver Half Dragon by Aperion
Ultraloth by CODI
Grick (2) by Zugoth n’ Deadly
Desert Zombie, Solar, 2 Kirin and Drowned One by Shemsu-Heru
Pig, Piglet, Sow, Goat and Bull by Ancarion

I will be making another update tomorrow as I will be taking a break for a couple of days to catch up on some work that I have fallen behind on. The release will include the following:

Warjack by Shemsu_Heru
6 Duergar by Draygoth28
8 Creatures by Zugoth N’ Deadly that I did take the liberty of renaming.
4 Troll Skinkites I renamed to just Skinkites because I thought they look more fierce then a piece of flesh flying around.
A Fire Giant Doomknight I renamed to Skelton Fire Giant
Vampire Frost Giant
A Iron Flesh Golem I resized and renamed to replace the NWN Flesh Golem because I hate it so bad.
1 Ravid

Not getting any feedback good or bad hopefully it just means everything is working as it should be at this point.

Unfortunately, at least in my opinion, feedback doesn’t seem to happen as much as it used to.

So true, kinda makes you wonder why even do it.

I generally don’t post stuff with the expectation of feedback on it. I make it because I enjoy making content and I share that content because it just seems to be the right thing to do considering all the generous folks I’ve interacted with over the years.

FWIW, I make stuff because I can. I post it so that people can use it. If I get feedback it’s a red letter day, especially if it’s something from years ago. The only thing that can be annoying is when EE breaks something and nobody tells you. Slow uptake can be a bit annoying at times too. It usually picks up over time though.

feedback doesn’t seem to happen as much as it used to.

[joke] At my age nothing does… 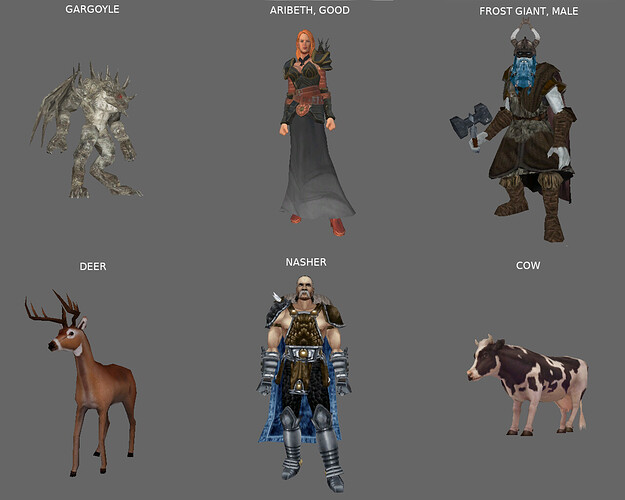