Crypt with ceiling -- issues with columns

Continued from the tread of the old forum… https://neverwintervault.org/comment/reply/28341/36892

My purpose for this was to automate the placement of a columns for my crypt with a ceiling–build over the CEP version of the crypt. A waypoint would be dropped on each tile indicating the tile type and orientation. When the area is entered the first time, all of the columns are placed accordingly. It works well, if the fog distance is set to 35m. Much over that, and columns start appearing from thin air–not exactly the immersive feel I was looking for. This would have allowed for columns variants–cracks and chips and whatnot–and completely difference styles of columns with simple scripting definitions. Since scripting of the spawning of placeables has the fade problem, the columns can be place in the tool set, but take a lot more time.

Here’s a screenie. Some of the columns on the far side of the chasm wouldn’t have been visible if they’d have been spawned in game. 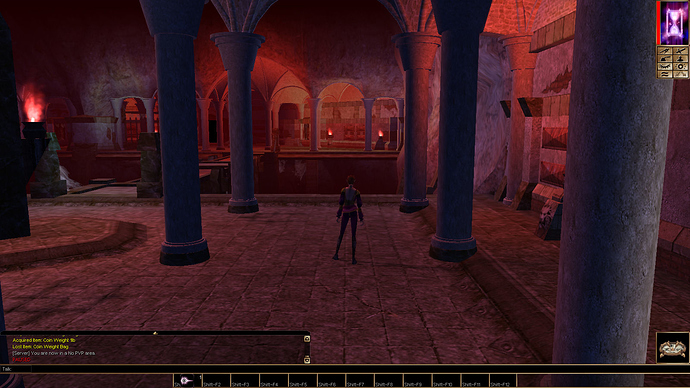 You could use a moneo script to place static columns that match each tile.

That’s a excellent idea save for the fact that I’ve never played with moneo script. heh. The script runs to about 2000 lines in NW. Even after I learned the new script syntax, I’d have to enter all the fiddly locations again for each of tile of the 200+ tiles. If I wouldn’t have put the columns on tile corners and edges when I designed to ceiling they would have been in the models, I wouldn’t be in this mess now. I didn’t foresee the fading problem with spawned placeables though. Yay me.

I’m guessing that it’ll only take me a couple of hours for an each area to place the columns. Select, drop, adjust. With six areas, by the time I’m finished, I’ll have an uncontrollable desire to bash the nearest column with a brick.

The suggestion to increase the ranges in ranges.2da works great for creatures, so at least learned one very useful thing in this.

I’m guessing this is for SP or other situation where nwnx wasn’t an option? I was just thinking you could use that to set them to static after they were placed, but… if you didn’t place them until you needed them, it would still need an area reload to take effect anyway. :\

The columns are set to static. They still disappear/reappear at around 40m even if they are placed before the PCs enters the area. As far as I can tell, the only way around this is to place them in the toolset.

I think I might have misunderstood how that works. I thought the distinction between placing in the toolset and “live” was that you can’t actually spawn “static” placeables (hence the name

), so all placeables manipulated IG are normally dynamic without nwnx intervention.

What is different about placing in the toolset and spawning if not the flags you can set ? Do you mean that even columns placed in the toolset that are not set to static don’t fade like ones spawned do?

I wasn’t really that clear, and sometimes I even confuse myself.

Spawning placeables that are static does work in game.

Tested this again -
Scripted spawning of the columns both static and dynamic = All fade at 40 m.
Toolset placed columns: dynamic fades, static does not.

Now I’m wondering if spawned placeables end up as dynamic even if their blueprint say they are static.

That would be consistent with my understanding – I searched high and low for a way to do “true static” dynamically (which was obviously not its purpose but y’know) for awhile, gave up, then ended up poking around nwnx when I came back to nwn. Eventually I asked niv and he’d already written nwnx functions for that very purpose like no sweat, so I stole them.

That’s not very helpful, because whether or not that is the case, I still don’t personally know any other way of doing it, sorry !

That’s okay. At the start of this thread, I did at least find out about ranges.2da for increasing the rendering of creatures. Smallish creatures were fine before, but when encountering a dragon it was all–I know there’s a dragon around here somewhere. Where are you dragon… Is it hiding? Is invisible? Is it playing hard to get? Is it…YAAAHHH!!! It’s right in front of us!!!