The theme for this month's challenge: "Not Just Walking XP":

This theme was suggested by The Amethyst Dragon.

Some things you could include in the download/email that would make packaging everything up easier and faster:

Remember, the Challenge is all about fun, sharing, creativity, and surprise!

This thread is for all sorts of discussion about this month's theme: ideas for things to make, questions/concerns, announcement of what you intend to make, screenshots of work in progress and/or finished projects.

If you want to discuss the Monthly Custom Content Challenge idea as a whole or wish to submit ideas/themes for future monthly Challenges, please post in its thread here.

When submitting a new theme, please provide a title and short summary of the theme.

If you have a technical question about some custom content creation, please create a separate thread so that the answers can be found later by anyone, not just people interested in this Challenge.

Have no fear and join the fun!

And finally, you can:

Yup. A bit late, but I blame being out of town since last week. Have fun. 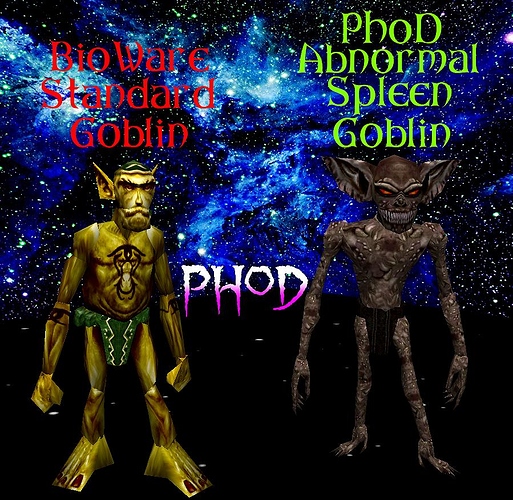 PHoD Spleen Goblin.JPG899×876 197 KB
OK, so I don’t really know much about D&D and have no idea if these things are going to in any way match any D&D Goblins specifically, but if they’re of any use to anyone, you’re welcome to them.
There’ll be a few variants.
As usual, my CCC entries consist almost entirely of stuff on my own stupidly immense “To Do List” which suddenly match a CCC topic, more or less, and thus provoke me to actually get them done… In this case, these “Goblins” are actually intended for the Wakatika in Demoness Tales, disgusting little freaks living on remote islands who like to eat anyone they can beat senseless and cram in their unhygienic cooking pots.
I’ve been using retextured BioWare Goblins up to now, but they don’t really match my Demoness Tales artwork, so they need changing… But, since the Wakatika are Goblin-like, they’re close enough for this month… though I’ve essentially completely altered the BioWare Goblin model in the process thus far, and may alter it further, so… maybe not ALL that Goblin-like… but they ARE small, unpleasant and smell nasty.
9 Likes
Vanya_Mia March 10, 2018, 7:10pm #4

Cute?
Hm… only in an “I’m going to bite your fingers off and then simmer them in oil” sort of way. Which isn’t very high on the Official PHoD Cuteness Scale.

It looks like some of the other Goblinoids might not want to try bulling them. Well done they look like they would be a bit tougher than the normal Goblin.

In case anyone’s interested, this is actually the 90th ccc.

We already have a gremlin model which I like very much… hoping for more in that vein or similar.

Just a quick progress report…
Four Variant Abnormal Spleen Goblins so far, possibly others to be done.
I am ALSO doing two variants of an Abnormal Spleen Goblin Hovel Dwelling. These will be Placeables so as the filthy little freaks can set up home anywhere you want them - or DON’T want them, more likely. When I’ve finished hitting them with bricks, these disgusting, badly-made dwellings will be as unhygienic as possible and probably rife with parasitic insects and loathsome stains of unspecified nature.
I am ALSO ALSO doing some Abnormal Spleen Goblin Banners to be placed beside the hovels. These banners will be stained, torn and generally nasty. Clean versions not available.
I will accept NO liability if anyone catches any Abnormal Spleen Diseases off any of this CCC.

I could see how you would think of it as a Gremlin. If you stick a mohawk hair style on it that should do it. 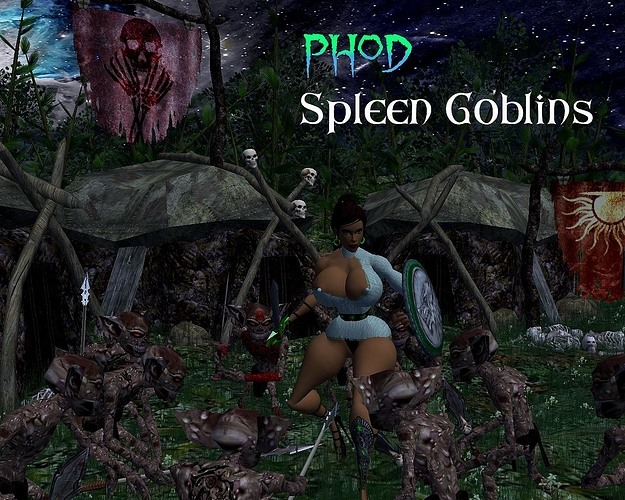 PHoD Spleen Goblins 1.JPG1280×1024 292 KB
Four versions of the Pungent Little Freaks, thus far. Variation mainly limited to tattoos. I brutally nailed a quiver of arrows to one of them at Natasha’s (Fifi’s) instigation, so you can have an Archer variant - assuming having the quiver nailed to it doesn’t kill it first. 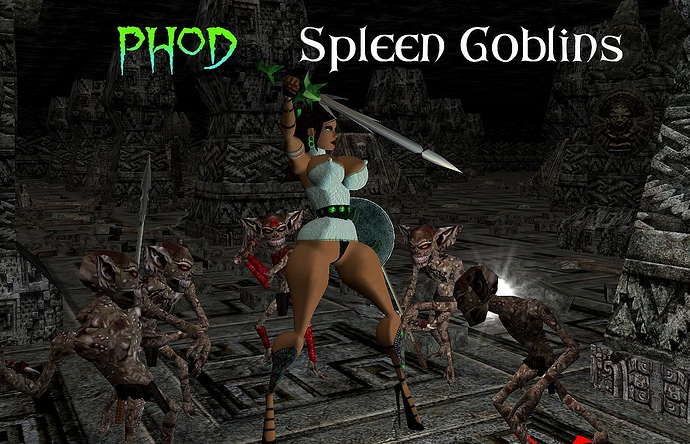 PHoD Spleen Goblins 2.JPG1280×824 224 KB
Hovels and Banners also done, though the Hovels may still require a bit more hitting with bricks. They may not be sufficiently crappy and dented yet. 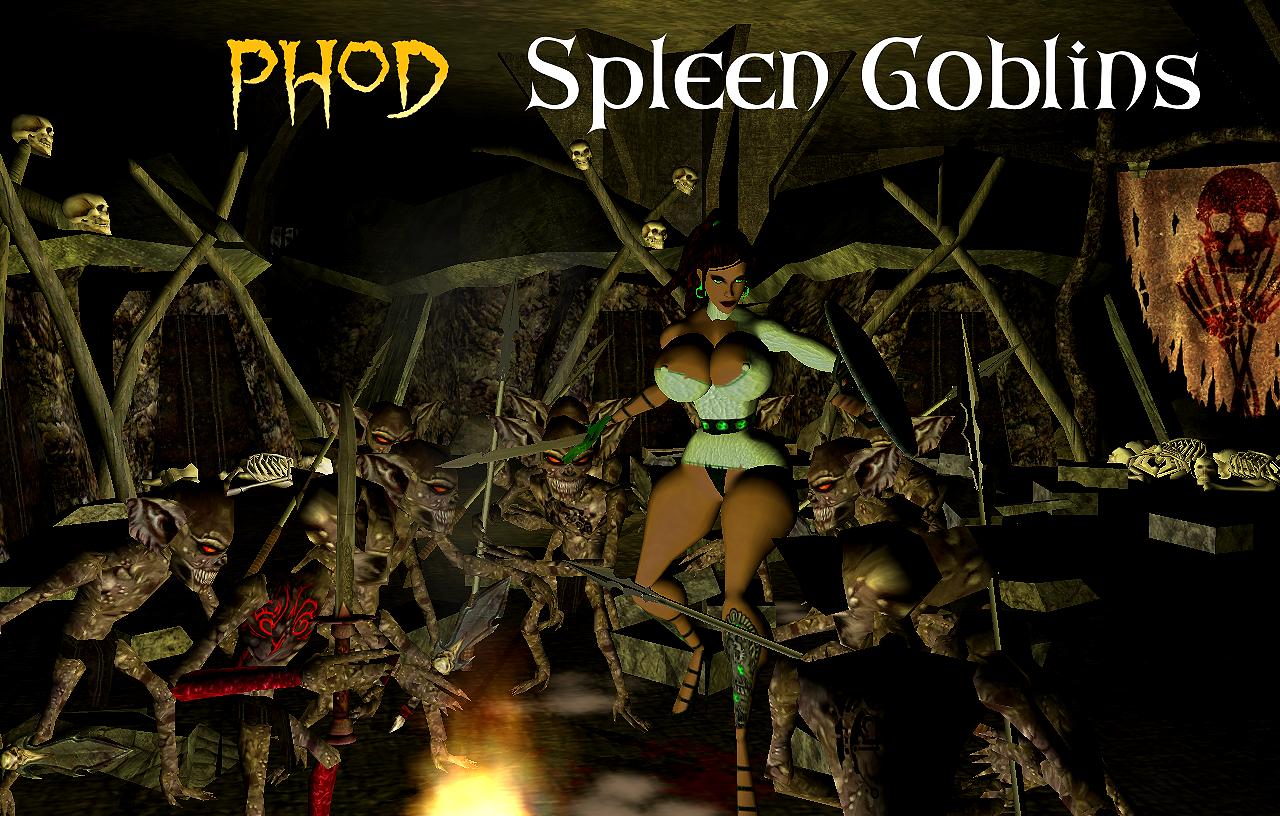 PHoD Spleen Goblins 3.JPG1280×816 203 KB
Despite shifting the position of the arms to accommodate a totally different, emaciated torso with wider shoulders, combat tests have shown the Loathsome Mangy Runts still animate without their arms flying off or anything, so I’ve no need to hit the anims with bricks, which saves time. 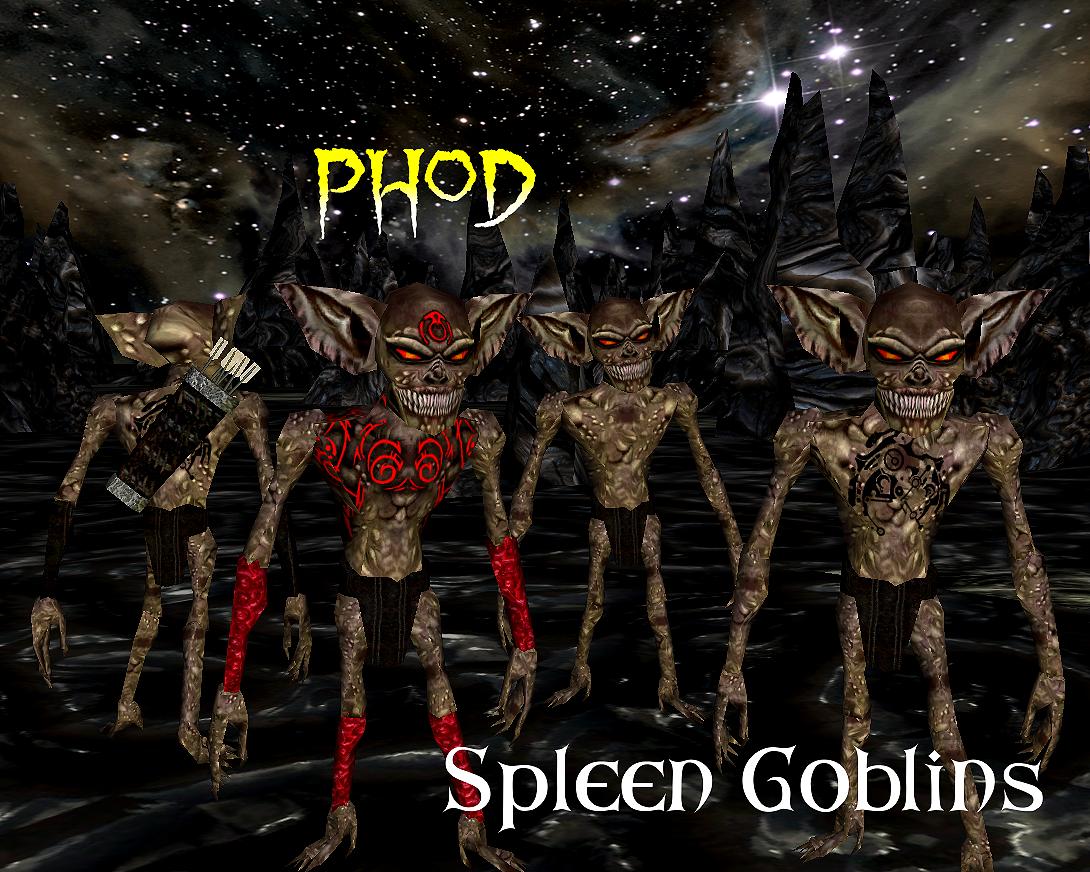 PHoD Spleen Goblins 4.JPG1090×872 180 KB
The nasty, slimy, rubbery one appended with red stuff is the shaman, the tribal leader. The others are all just, you know, gobshites. They all smell nasty and they will all try to eat you if you let them. 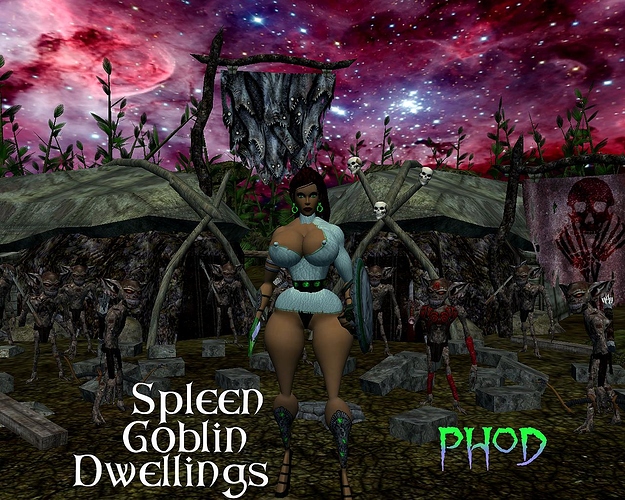 PHoD Spleen Goblins 5.JPG1280×1024 286 KB
As I say, the Hovels (two versions) ideally need more work, but the Banners (three versions) have now been finely and artistically nibbled holes in by a cabal of Specially-Trained Elite Commando Moths who like nothing better than nibbling holes in cloth. Well, I say Moths, it’s more Moth Caterpillars that actually attempt to chew holes in your favourite T-shirt if you turn your back on it for ten minutes, but these were Special Demented PHoD Moths, so… 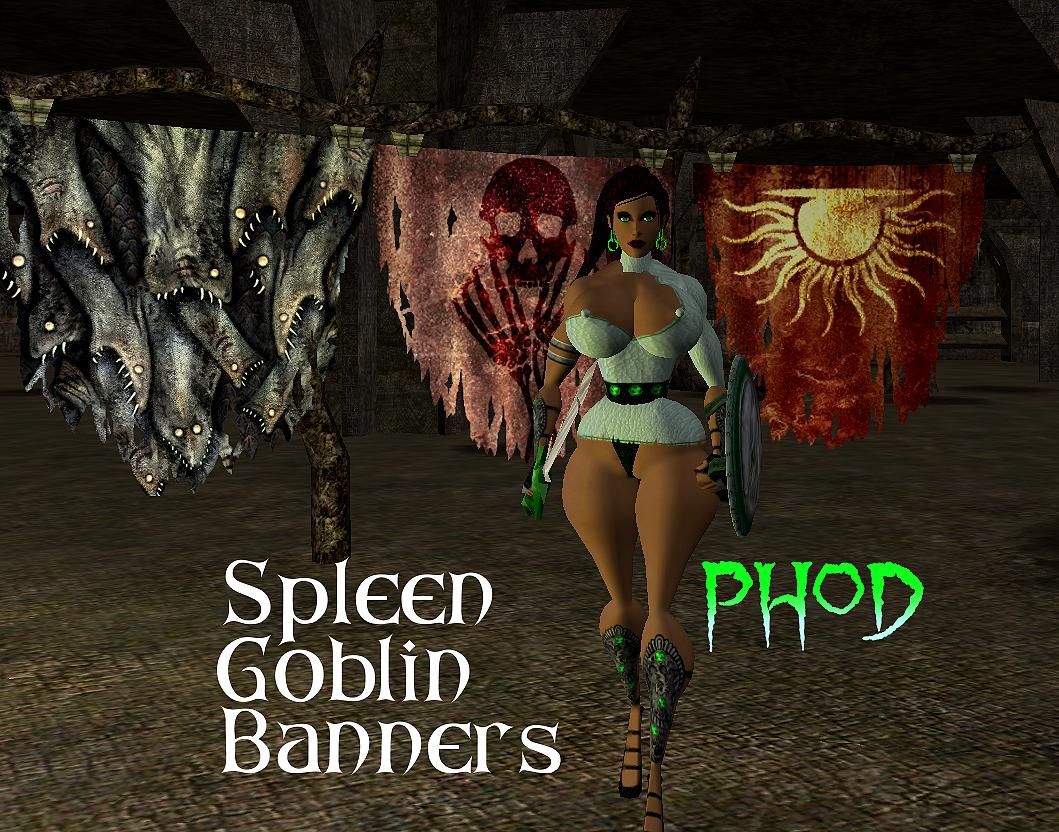 Very nice banners. I’ll put them to use in the module I’m working on.

And I really like the new & improved heroine. She looks like she just walked off the set of a Russ Meyer film.

Hm. Now I’m on a level with Russ Meyer, am I? Now I KNOW I’m doing something wrong.

But she looks like a very good girl. As I said before good girls can be fun to. How was that TR.

I watched my language.

What happens if a group of goblins wants to take prisoners?

Following up on quevy’s teaser… we’ve teamed up to make ropes and chains for capturing creatures. 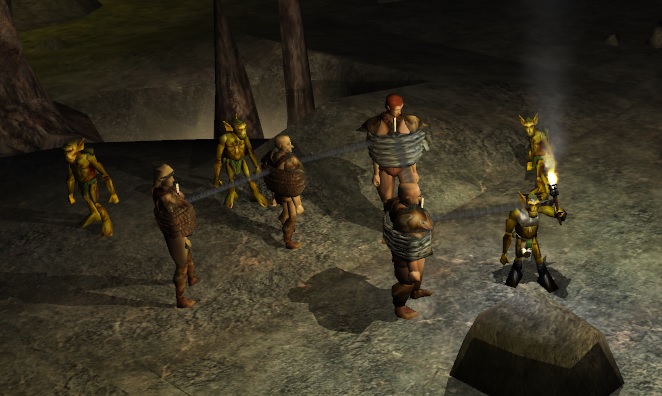 There are currently two different types of restraint; ropes, and metal chains.

If you possess a rope or a chain inventory item, you can try to use it on other creatures to capture them. If your attempt has been successful, the restraint is now linked to the creature and vice versa. Using the rope on the creature again frees it; the chains generate a key when they’re used, and need to be unlocked using that key. Using it on the ground makes the creature stay put. Using it on another placeable or creature ties them to that placeble or creature.

There is a rope-cutting knife, which only cuts and destroys the ropes. The metal chains generate a key when they’re used, and need to be unlocked using that key.

The player, too, can be tied up, either as a cutscene dominated captive that can’t do anything on their own anymore, or without the cutscene domination, but they can’t equip or unequip items anymore while tied up - or, rather, they’re immediately being un- reequipped again if they try. 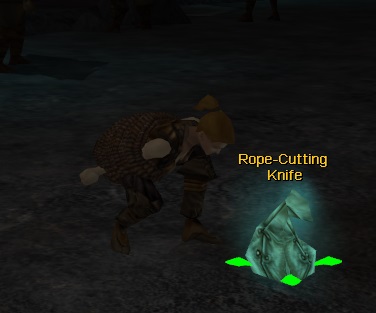 If they get the rope-cutting knife, however…

And, of course, it can be used to free others as well. 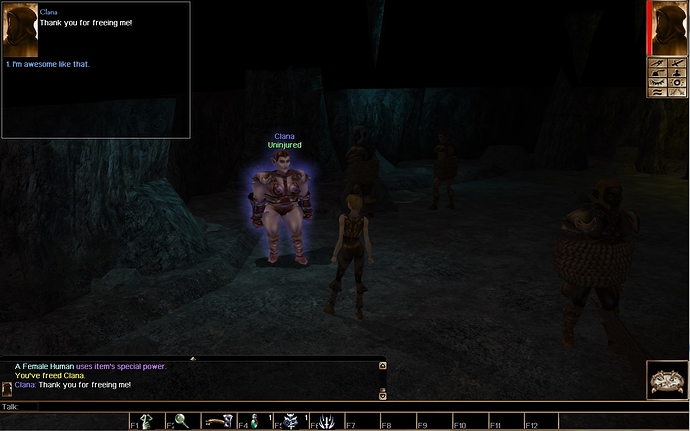 Goblin hordes may now abduct townsfolk to work in their mines, and Noble Heroes may sneak in to free them.

Also there’s this white stick which I will attempt to sell as a feature rather than a we just don’t know how to get rid of this thing. It seems to be part of the beam VFX. 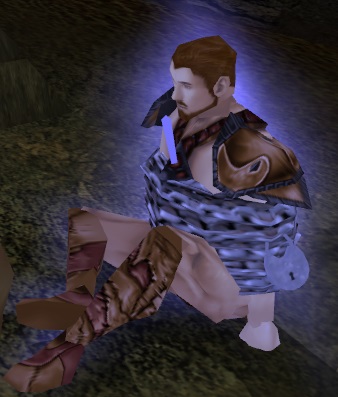 I dub thee “The Nosescratching Stick”.

I hope you can enjoy this, I thank TheBarbarian for making it possible to realize my idea, to have taught me new things and to have endured all my questions

Really well done Barbarian now we can all tie the enemy up or be tied up. Which ever way of our preference.