The theme for this month's challenge: "Machines":

Any crazy contraptions, gizmos, doodads that might be useful for something. I know those gnomes have created more than just a "gnomish contraption" since NWN came out. Things like: Mechanical horse, Wagon car, and an elevator that would fit nicely into some of the small interior rooms.

This theme was suggested by GhostOfGod.

Some things you could include in the download/email that would make packaging everything up easier and faster:

Remember, the Challenge is all about fun, sharing, creativity, and surprise!

This thread is for all sorts of discussion about this month's theme: ideas for things to make, questions/concerns, announcement of what you intend to make, screenshots of work in progress and/or finished projects.

If you want to discuss the Monthly Custom Content Challenge idea as a whole or wish to submit ideas/themes for future monthly Challenges, please post in its thread here.

When submitting a new theme, please provide a title and short summary of the theme.

If you have a technical question about some custom content creation, please create a separate thread so that the answers can be found later by anyone, not just people interested in this Challenge.

Have no fear and join the fun!

And finally, you can:

Does anybody remember the Machine of Lum the Mad? 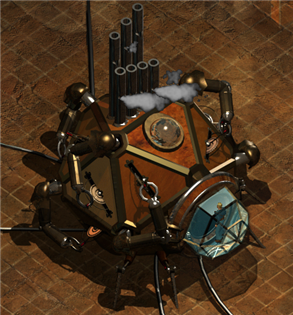 Oh, yes anyone who was a DM under the D&D 1 or 2 editions rules should remember that Machine. I even used it in one of my Greyhawk adventures back in 1979. As usual your stuff is very well done rj.

Not a problem rj, at least not for me.

That likely does exist in nwn2, as I believe the team converting BG2 to nwn2 said they had finished the area where that’s located. They might have to be pestered to make it available sooner than their release though for it to be ported to nwn1.

Suddenly, horrifyingly, the Shabby Deluded Hyena Object crawls out from beneath a rock and starts throwing Obviously Hazardous, Badly-Made, Ill-Maintained, So-Called Devices about… 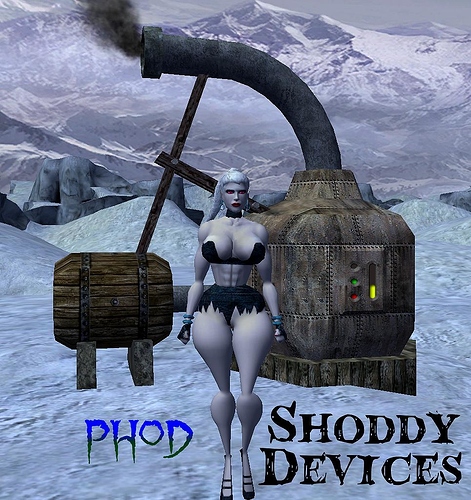 PHoD Device A1.JPG965×1024 185 KB
Here’s one as an example - because it’s the only one textured at the moment… It’s a highly sophisticated, incomprehensibly magnificent, amazing culmination of astounding technologies and… um… it’s a Blatant Heap of Rubbish. A sort of lumpy boiler thing with bits on. And a foul outlet pipe on top, spewing disgusting toxic pollutants, as is the habit of industrial apparatus, no matter how crude and primitive. (The noxious pollution is a built-in emitter, and it reeks). The “control panel” things, (there’s one on the far side of the boiler too) I lifted and adapted from the animated control whassnames in the Steamworks Tileset. They animate just as well on Placeables. Gives the thing a bit of life whilst it spews disgusting smog and fallout and oomshka over everyone and causes debilitatingly corrosive acid rain… 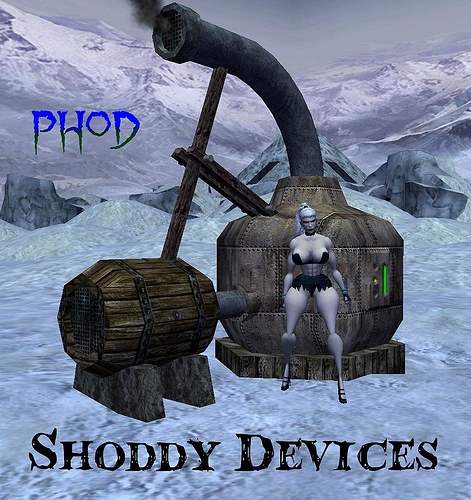 PHoD Device A2.JPG965×1024 184 KB
But at least it’s nice and warm for Demoness Tales’ resident albino witch to lean against on a cold day when the stupidly grinning Hyena Idiot sticks her in the tundra in a bikini and a tatty skirt…
Four other shoddy devices of assorted shapes and sizes currently untextured… Exactly how many Useless Contraptions I’ll get done this month I’ve no idea… but there’ll be… some.
11 Likes
PLUSH_HYENA_of_DOOM May 15, 2018, 8:04pm #9

Notice art hereby given that Doctor Humongo Mental, who doth beareth not ye slightest resemblance to Plush Hyena of Doom, honestly, hath by means of ye High Skilles, devised an Speciale Apparatus by which it doth be possible to transformeth Base Goats into GOLD! Or possibly to transformeth ye Base Gold into GOATS! There appeareth to be some diverse and sundry confusions upon this point. 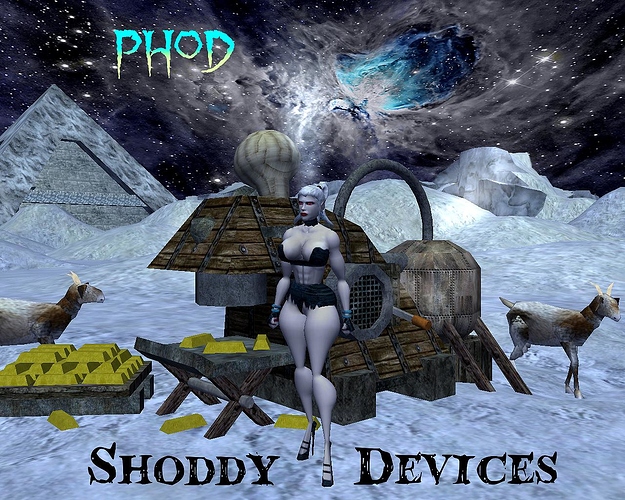 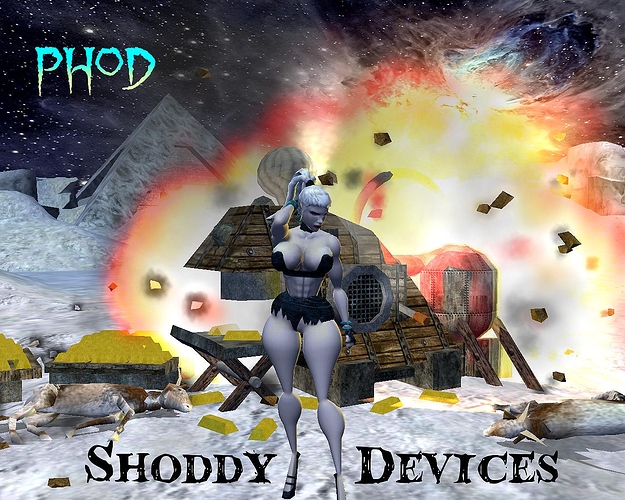 Plush you are so funny… Lol
Always a treat.

Another one bites the dust. lol

The following Rubbish Placeables were hastily built by PHoD in close collaboration with his old friend, Nikola Tesla, who provided some bits of rusty metal and a bent spring… It was his idea, he forced me to do it… “Let’s build some NWN Tesla Coils” he said… 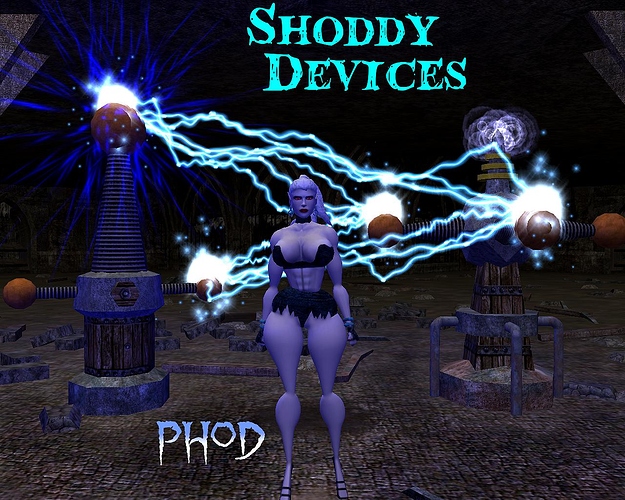 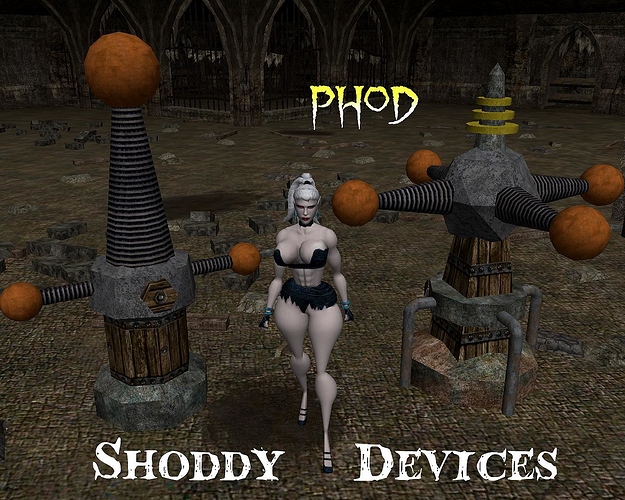 PHoD Device C2.JPG1280×1024 246 KB
Am I made of room-temperature superconductors and high-tensile, non-corrodible goat-accelerators or whatever already? Where am I supposed to get all this stuff?
Alright, I admit, they’re pretty when they work, Niki, but what’s the point of them already? What’s anyone going to do with them besides electrocuting Goats and coming up with ever more dribblingly insane scripting routines to make lightning shoot across the room and knock tin cans off shelves…?
Of course, what you do is you obtain the Only Slightly Hazardous PHoD Tesla Coil Control Unit provided, with its obscenely vast gauges and nauseatingly chunky coloured bulbs, and messed-up valve controls that are rusted fast and don’t work… 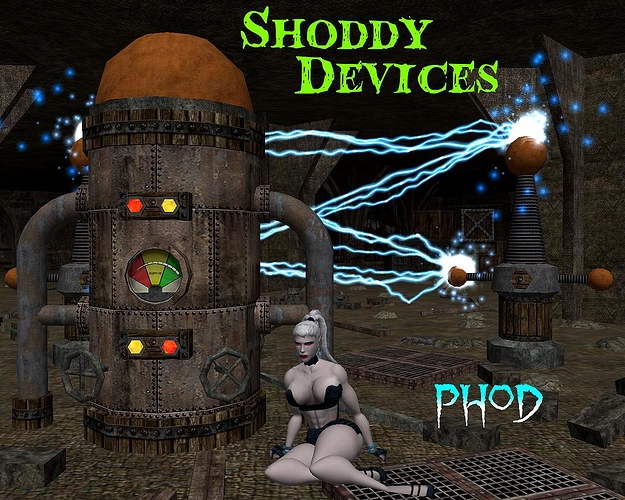 This latest contraption begs the questions “Whatever will PHoD build next? A goat powered Wimshurst machine?” and “Will this spark (groan away - I’m wearing ear-plugs) the interest of somebody else enough to make them create something?”

A giant Wimhurst machine would be great, 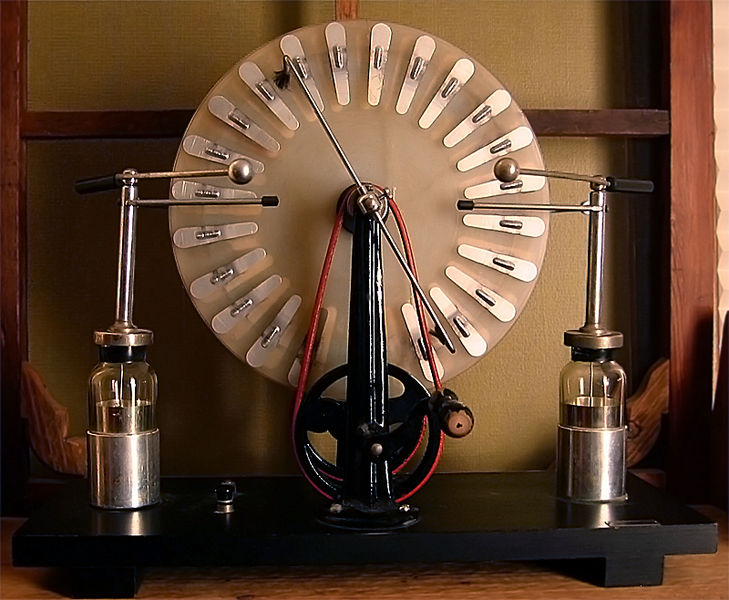 but i am partial to Van De Graaff Generators 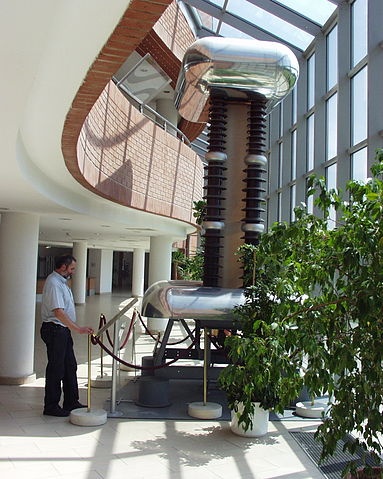 Disturbingly, having run out of Goats and thus zapped himself - again - with a badly made Tesla Coil, PHoD suddenly turns his abnormal attention upon a completely different type of power source altogether and gets into Alternative Technology… Wind Power!

PHoD Device D1.JPG1280×1024 261 KB
Nasty, deafeningly clattery wind towers that make the most jarring clanking noises available, especially when you’re trying to sleep, and are mandatorily unstable and prone to collapsing with a shattering rattle-clatter-BLANG that can be heard on Mars. The Outback’s full of them. Usually situated on a direct line close by your bedroom window and/or tent flap for maximum intolerable crashing sounds which WILL linger in your ears for days, even weeks, after you leave the vicinity…
And, for those who prefer a more traditional, domestic appliance… Steam Power! 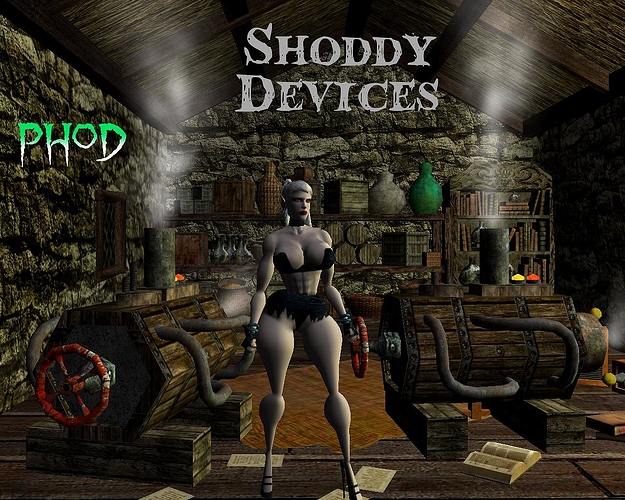 PHoD Device D2.JPG1280×1024 300 KB
Perfectly proportioned for interior use… though Natasha helpfully pointed out that if used as depicted here, your rubbish longhouse would very soon be a sauna, the hideous condensation amassed above would not only cause an unending rain of cold droplets which will fall on you, no matter where you stand, but also make the thatch go all mouldy and, sooner or later, collapse on you in a debased, mushy heap… Women; they’re so damned practical…
And, as you may have noticed lurking near the base of one of the Wind Turbines above… Hideously Chunky PHoD Crude and Primitive Batteries TM! 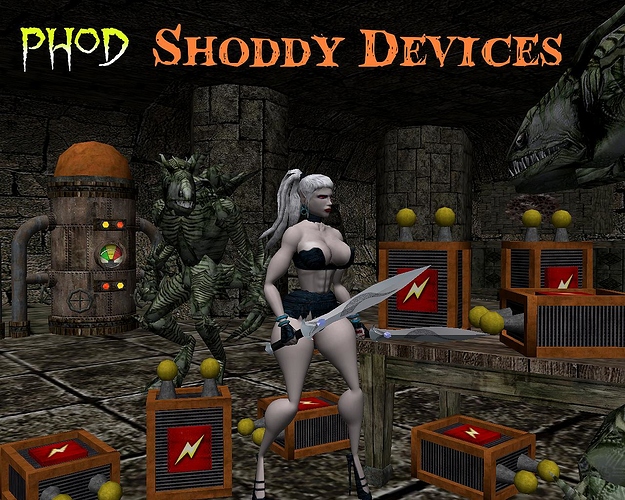 PHoD Device D3.JPG1280×1024 280 KB
When I was doing the Tesla Coils, it was suggested - stand up, Vineeta - that I should put a clichéd, daft lightning flash warning sign on them; I foamed rabidly and vehemently stated that it would rain Poodles in Hell before I’d go sticking any such silly things on any of my Shoddy Devices. However, when I was making some nasty, acid-leaking battery things for storing the power put out by the Tesla Coils - such power as hadn’t already zapped across the room and exploded some Goats anyway - Vineeta claimed to have seen some Poodles falling into the Maw of Tartarus. Now, I’m not saying I believed her, but… well… Well, if she really, really wants a daft, clichéd, lightning flash warning symbol, then… Just don’t blame me for the ludicrous nature of these so-called batteries. I only built and textured them so it’s not my f… hm…
Available upright or - shock, horror - fallen over! Such excitement.
More to come - including a special gift for Halflings and Gnomes and also … Did you really imagine the Shabby Hyena Thing wouldn’t add “Spleen Creatures” to almost any CCC he does anything for? Mechanical Siege Engine Beasts with Homicidal Intent are marching this way!
11 Likes
PLUSH_HYENA_of_DOOM May 26, 2018, 1:00am #16

Sssssoo… this isn’t a machine as such… but, machines have to be built, right? Somebody has to manufacture them, right? So sort of this counts, a bit… maybe… 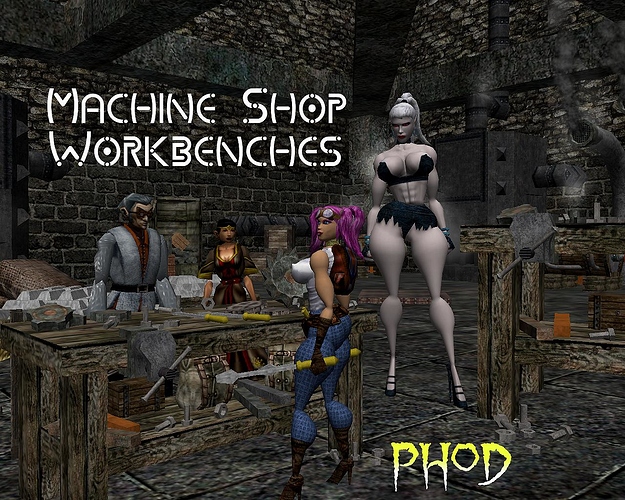 PHoD mswb1.JPG1280×1024 300 KB
Millions of years ago, in the Early Triassic, I started doing a NWN Module series about a family of demented Halflings who were all consummate makers and builders of assorted mechanical “stuff”. I didn’t use Gnomes, 'cause NWN Gnomes are a Weird and Freakish Shape and their Debased Noses have an unfortunate effect upon my tendency to foam at the muzzle and pounce… But I gave up on the series 'cause I got fed up with the Halflings farcical speeded up running behaviour, their outrageously oversized feet and the utter lack of lots of rubbish steam machinery and so forth…
I found these abandoned Modules a few months ago and discovered them to have some merit and so, having learnt a lot since the original attempt, I’ve been hitting Halflings with Bricks, have reworked their walk/run distances, etc and am now making loads of rubbish steam machinery and so forth… Anyway, having got the daughter of the family, young “Blossom”, sorted out - our Halfling heroine who can make or fix absolutely anything there is and, despite being small, is righteous in combat with her oversized screwdrivers - and got her some nice boots with a decent heel on them so she can pretend to be marginally taller than she obviously isn’t and avoid Halfling Monstrously Huge Feet Syndrome, I promised her a Decent Workbench, with a proper vice and everything. 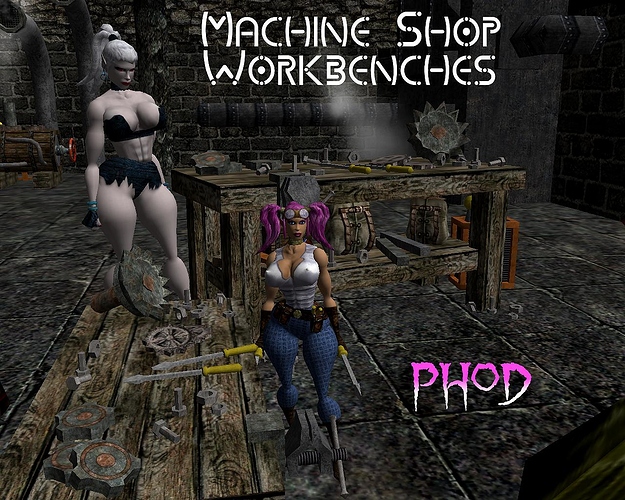 PHoD mswb2.JPG1280×1024 276 KB
So, here it is, complete with the promised vice, - no, not lust or envy or any of those vices, the sort that grips bits of metal and wood for you - a nice lower shelf for storing materials, tools and unidentified, low-poly blobs shoved in by the maker, and littered with tools, cogs, gears, nuts, bolts and small, nebulous things that cannot be precisely quantified, lovingly hand-scaled for Halfling use - and Gnomes, I s’pose, if they make an effort to conceal those freakishly mutated proboscis things on the fronts of their faces… 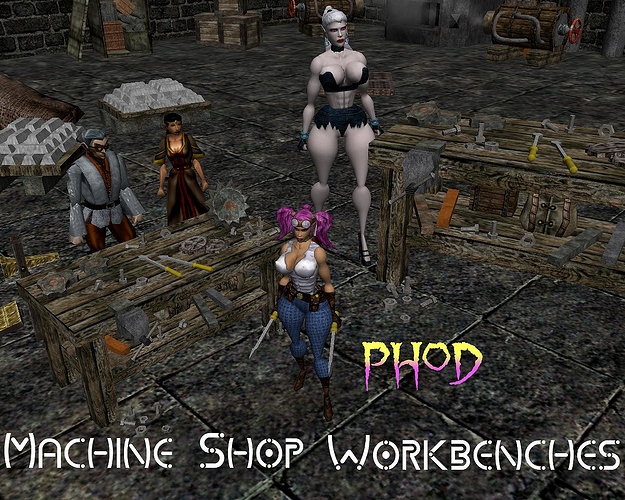 Maybe we could get the person who did the trains and monorail to add them to the challenge since it fits the theme.

I have already suggested this in another place. If he wants I think he will.

I think they’re called simple machines, so yes they sort of fit.

Any crazy contraptions, gizmos, doodads that might be useful for something.

My reading of that is that PHoD’s doodad does something useful and so definitely fits.