Hello everyone as the name suggests i’m having a lot of difficultly getting A custom voice set I’ve been working on to work in game. It does appear in the game menu but is listed as a bad stringref and doesn’t play any sound when previewing it.

I suspect the issue involves the tlk table because while I had no issue editing the sound2da file in truth I have absolutely no idea what to do on the tlk side of things. the tlk files i have are most likely useless as i created them with ssfedit but i don’t think they are correct and i’m fairly stumped on how to actually get a working tlk file. Can anyone who is familiar with working with custom voicesets give me any advice on the steps needed in order to get them working? Any help with this would be greatly appreciated.

Below are a few pictures of the files i’m working with. 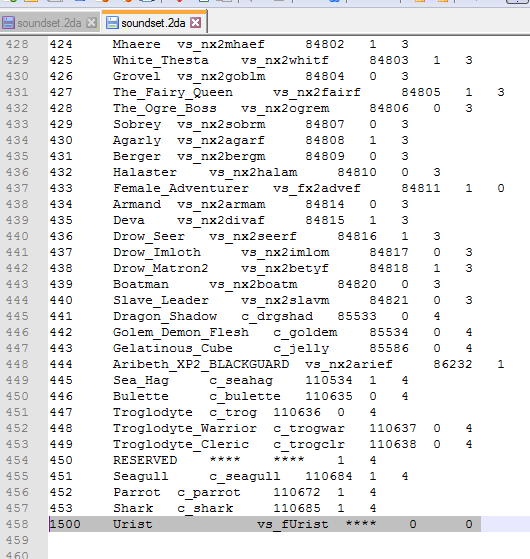 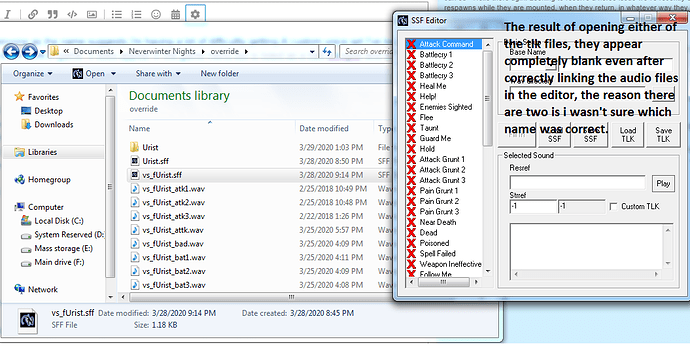 I have made custom sound sets for NWN2, but I’ve also used ssfedit. I think that program has behaved a bit wonky, if I remember correctly. What I always did was to take another already working ssf file, and edit that referencing my new sound files and giving the ssf file a new name. I never had any problem with that. When editing the sound2da file (I’m looking at mine now) I seem to always have: The name, then the vs_name, just like you have, and then **** and lastly 1 and 1 (and sometimes another 1). I don’t quite remember what those digits at the end do, but looking at the top it seems to have to do with gender and type. Strange, cause most of my soundsets are female, but one is not, and I still have a 1 and a 1 there. And it works (but again that is NWN2, so I don’t know).

Another thought: Your soundfiles…They are mono right? 'Cause if they are stereo that could cause isssues, I believe.

Hey andgalf appreciate the response, from what I gather you are correct about the numbers representing gender and type( in my case 0 represents a males voice and the other 0 representing a player character(I believe the second 1 you’ve added represents voices for companions but would be unsure on the 3rd 1.

my files are mono so there’s no issues there, my original plan was actually to open a different ssf file and substitute my own sounds(it’s how i got my sound2da file as well) although ssfedit was unable to open the ssf file I acquired, i’m thinking I might have better luck with another ssfeditor, was unaware the may have been issues with ssfedit, i’ll look into that and see if i can make some progress. cheers:)!

Yes, I think you are correct in your statements.

If I remember correctly, I had some issues with saving if I created a new ssf file from scratch.

I don’t know about other ssf editors though. If you happen so stumble upon something better than ssfedit I would be happy if you told me about it.

Alright so I’ve found another editor called Ssfeditor which can be found on the nwvaults(might only work for nwn2 but can’t be certain as i couldn’t get my voiceset to work on that either using a nvn2 2da).

While not being quite as easy to use as ssfedit it does appear to be able to open ssf files without issue and allowed me to copy the original ssf file like i planned. Unfortunately i’m still missing something as the issue persists despite mimicking the original files which appeared to work just fine when i had tested them. It still turns up as missing sting ref in game so it must be an issue of identifying the files i’m using in the 2da, i’ll double check that the names are identical but if they are i’m pretty stumped on what to do from this point.