Hi
I’m making a D20 modern mod and having problems with the inventory and some items.
While in toolset there are no problems, but ingame the “modern background” for the players inventory is changed back to the standard one, and many modern items have their inventory icons changed or dissappear from the game! Also weird shadow problem with some weapons.
Best shown via screenshots.
This is the standard 2.2 base module, just changed by placing an NPC and items. standard items (but I’ve tried altering their appearance/color etc. without effect)
I have CEP 2.65 installed also. Nothing in override. It’s steam version and subscribing to a few things like CEP, BeamDog new weapons and a tileset. I tried temporarily emptying the workshop folder but no effect.
I hae tested this on 2 different computers and reinstalled ModernD20 2.2 , tested on old module using 2.1 , all with the same result.!
Any help will be greatly appreciated! 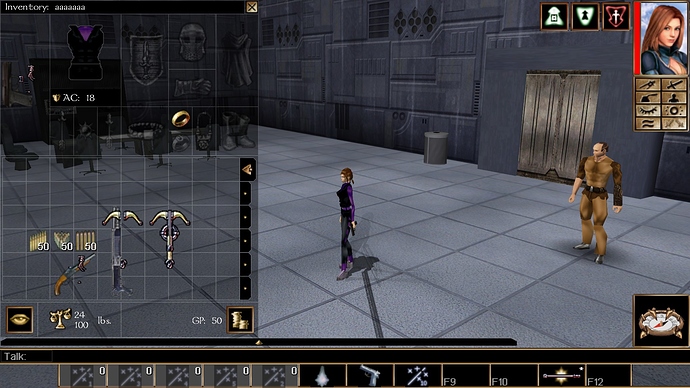 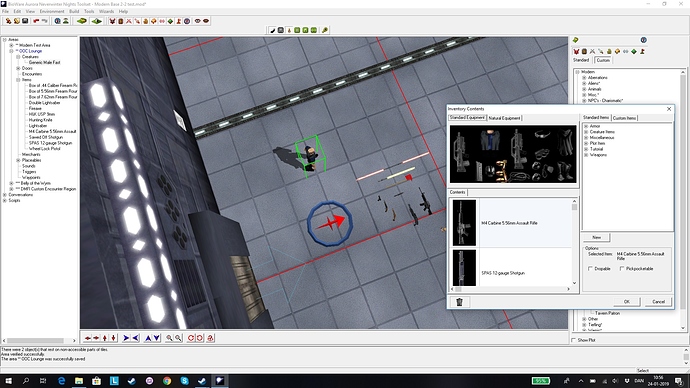 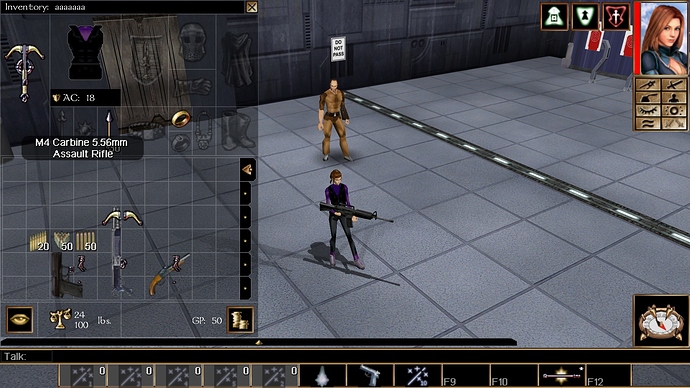 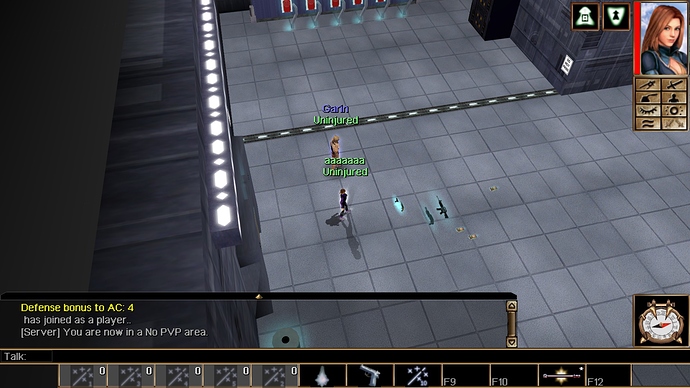 im using d20 modern but just part of the base d20 classes and skillsets but from what im learning, as this is mostly a learn-as-you-go kinda thing, is that the whole d20 system is very buggy.

Im using a very lite version of the weapon system too and from what i learned,i removed a greater part of the weapons, is that most likely you will still see them show up as crossbows due to either the guns creator nver bothered making icons, or you will have to go double check that every piece is set to a number that shows nothing at all if that makes any sense

thats just a guess considering that i never ran into this problem and i am, in a way, using the exact same haks.

thanks for your reply, but my problem is not that the icons are missing altogether, but only missing ingame! everything shows up fine in the toolset…(see screenshots) I have no idea what can cause that?
( and same result with base module, so not related to my mod)

Sorry for the late reply, life does things occasionally.

I’m aware of the modern background only seeming to apply to the toolset. So far I’ve not been able to track down the why of that one, it seems to be overidden somehow in the local game, and it’s on a very long list so if anyone has any thoughts.

No you will not be able to change the colour of weapons as they are, unfortunately, single models without the option. For some there are different colours of them in the various slots but not all and rarely for the non-scifi weapons. You’ll also find in many cases that if you change the colour the model will change. This is how the models were set up by the progenitors of the system and frequently by people providing new ones. As a result I’ve just worked with it, though where I’ve added weapons that do have colour variants I’ve followed the traditional options.

The icons are, in the most part, single elements attached to the middle part of the weapon as the models themselves. Where there are sights and other aspects of these I have tried to override their icons with appropriate or associated null ones so they do not interfere improperly with the inventory. However, I have not overriden all top and bottom models from CEP or vanilla, only ones where there is a new model in the haks, so that may be at the root of the problem.

I’ll have a look and see if this happens for me but can I ask, have you changed the standard D20 weapons at all or are they ones straight out of the template?

Thanks Vanya,
Yes, for my test I used standard D20 templates (standard d.20 2.2 base module). Same happens with custom ones I use in my mod.
Looks fine in toolset, but very strange/missing ingame.
Could it be some sort of DDS/TGA issue, also with the modern background? Some things need the image in DDS, others in TGA?

I can confirm that something appears to be happening to null models, which may be that Beamdog have added in a feature overriding them. That leaves me a lot of work to go back and review them all though, not least as I may have to add model icons. sigh

You’re going to have to leave it with me until I can do that, which isn’t a quick fix. I’ll post something on the download page as soon as I can. I’ll try to make it retrospective so the problem is fixed for all. At least the models look okay in the meantime.