This came up on the BD forums recently. Here is what I wrote -

Bioware dds is a very early (bleeding edge at the time) but now obsolete version of the format. AFAIK it is unique to NwN. However there is a new tool called “NWN Crunch” that allows you to convert between various formats including Bioware dds.

Back when I was doing textures for FPS creator I used Gimp to open DDS files and export them as TGA.

Gimp is not the most novice-friendly program but for me it worked. Afair it has no batch export though.

No luck getting that application to even open.

I have GIMP, but it doesn’t recognize the DDS files.

If it was regular DDS and not Bioware DDS I would recommend XnConvert for converting several in one go. With Bioware DDs I stand by my recommendation.

No luck getting that application to even open.

I just downloaded and opened it this very minute. My guess is your unarchiver is out of date. Current 7zip is v18.05 released back in April. No idea of the relevant version numbers for either winrar or peazip though.

It’s extracted, but neither of the applications open in the bin folder. If they’re command line it isn’t very clear.

Extract the entire contents of the NwN Crunch zip file to a folder of your choice. Read the README.txt - it tells you where to put the image files and which batch file to use for the desired result.

XnConvert comes as an installer if I remember correctly (I’ve had it so long I forget).

If it was regular DDS and not Bioware DDS I would recommend XnConvert for converting several in one go.

Or - if you are a command line wizard - go with ImageMagick.

This works wonderfully. Thank you.

Following on from the latest stream, I see that there is a new complication. NwN EE can now use normal DDS in addition to Bioware DDS. Even more confusion for newcomers.

, however I have not made any progress in adding additional weapon parts to use additional textures.

Have you read the Custom Content Guide section on making weapons?

If you’re still stuck, it probably deserves a new thread, as it’s a slightly different topic.

Sure have. It’s a great document.

I’ve gotten as far as creating duplicates of existing models and adding them to the game as new choices in the toolset. However, simply editing the mdl in notepad to point to a new texture isn’t working.

The model becomes invisible when I do that. I’m using a copied and renamed w_metal_tex.tga to test, I renamed a copy of it w_metal_tex2.tga and changed the mdle file to look for it, but it isn’t working.

Odd - that ought to work. The new model should contain

Worth checking that both the new model and the texture are in the hak (or otherwise visible to the module) but I expect you already thought of that!

I just discovered (in the creature section of the CC Guide) that I am supposed to decompile the model before editing it as a text document. I’m working out how to do that now. I was editing the compiled .mdl file instead of decompiling it first.

I’ve been working in the override folder for now.

I’m stuck using decompiled models but it does work 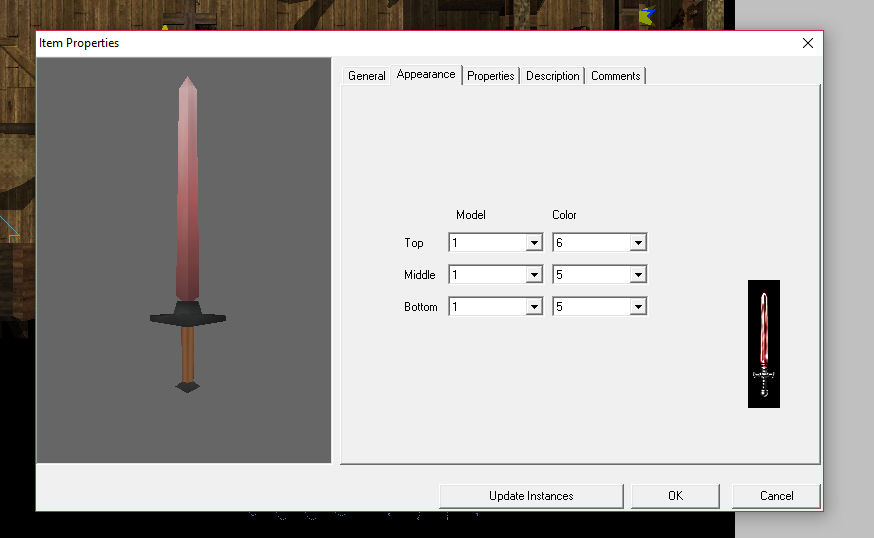 Good news is that decompiled models are not perceptibly slower (unless the poly count is truly enormous).