Does anyone know where this custom content is from?

I’ll start with a specific request of my own, and I think it’s an easy one, but everyone is free to use this thread for similar questions in the future, because I’m sure I’m not the only one looking at screenshots or in-game content thinking “Wow, where did that come from?”. 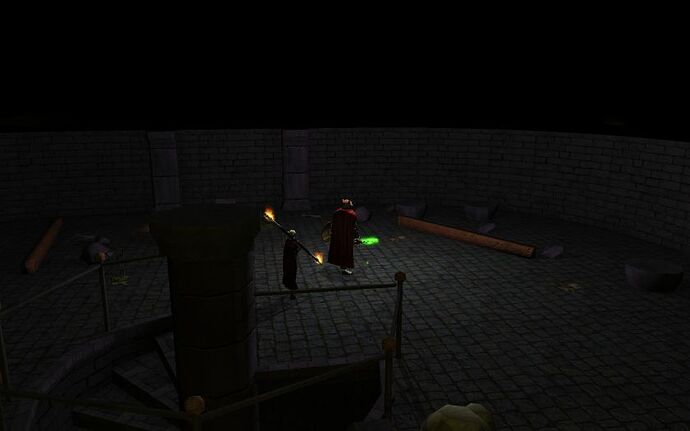 So, I was wondering, do you recognize the dungeon tileset in this screenshot? I know it’s a quite popular one, I’ve seen it before, in several older modules, but I can’t remember the name, if I ever knew it. Is it part of CEP or CTP? Does it have a separate Vault entry? Thanks for any help you can offer!

CTP and I would have thought it would be familiar to you as it’s used for four areas (basically Snoots lair) in Hrothgar’s Resting Place (the first of my modules you were kind enough to play test). It is called Dusty Dungeon (ctpr_dustydungeon.rar) and FWIW if I knew what I was doing I would love to give it the fancy graphics treatment for EE. It’s my personal go-to for a dungeon tileset.

It is familiar to me, from other modules as well, but that was almost 10 years ago, and I’ve been a bit out of touch with NWN and the community in the years in between, and I’ve always been more of a player than a modder. Plus I’m getting older and my memory isn’t all that great anymore.

Thanks for enlightening me!

What is the graphics treatment for EE? HD textures?

What is the graphics treatment for EE? HD textures?

Put simply you have extra graphics files that match the original texture pixel for pixel. These are called maps. Each of these extra graphics files have a single purpose. For example one type can make it so you get an impression of 3Dness (take a look at the picture for this fake door I did a while ago) from a 2D texture. Alternatively look at the picture of a tiled roof on this page. The base texture it is made from is on the previous row. Another file type can govern the shininess/dullness of an object. For an example of that have a look at Experimental EE Celtic Knots that I did when we first got these improvements. There’s a demo module included in this last one if you want to compare it to the original TR’s Celtic Knots that the experiment was based on. FWIW, these extra graphics files have come to be called “Fancy Maps” on here.

That’s LoK dungeon. I don’t know if there’s any altered versions as the version I’ve always used has an issue with the water not showing

So I’m not the only one with a bad memory?

Thanks for pointing that out. TR still had the right idea though, LOK Dungeon is also part of Community Tileset Project. Have you tried that version (ctp_dungeon.lok.rar)? Maybe it’s more advanced than the one from the individual Vault page?

@Tarot_Redhand
Thanks for the explanation about “Fancy Maps”!

Dang, I always get those two mixed up. Mind you I found there was a problem with the links to Sharon Tipton’s documentation for this which I have now fixed. FWIW @Olivier_Leroux it contains a large list of all the people who worked on the ctp over the years.