First, the purpose of initiative rolls is a simple concept in pen-and-paper D&D, but it gets changed significantly in a real-time game like NWN2. I read up on the Wiki, and I wanna make sure, do melee combatants actually wait once their round ends until it’s their turn? If so, is it against the people that are engaging with them in melee or anyone engaging in melee in the whole encounter?

Second question is about BAB progression. I looked at the table in the Wiki for the umpteenth time, and I see a line that states the following:

Am I crazy, or am I reading the table correctly and a pure Lvl.30 Fighter (for example) is capable of 11 attacks in 1 round?

The fighter (or any class with full BAB progression) gets 1 attack at every +5 interval from 1 so:

and so on… this does not count extra modifiers from Haste, Frenzy, ecc… just the base number of attacks per round.

I don’t know if there’s an actual cap to the number of attacks per round, I remember that NWN1 (following 3.0 rules) capped it at 4 base attacks per round (not counting haste or any additional modifier), but I’m pretty sure that NWN2 goes well beyond that. 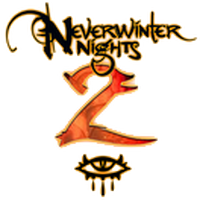 The values below and the bold numbers are the character's actual Base Save Bonus on the Character class. The bonuses do not stack on every level up, except for Multi-Class. GREEN means TWO (2) Attacks per round. BROWN means THREE (3) Attacks per... 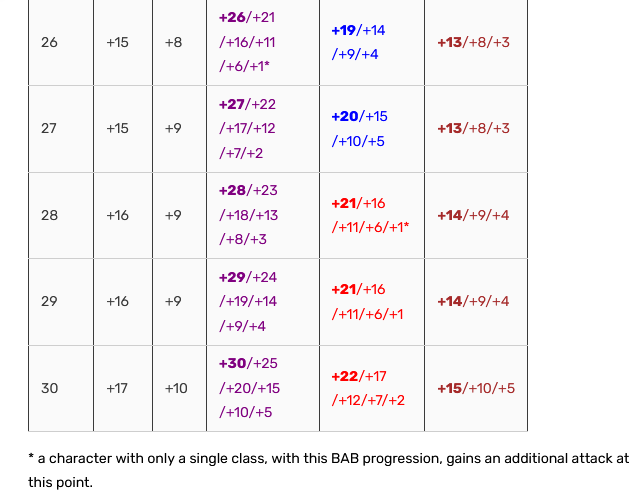 Edit: I forgot to make it a reply, dammit. @Clangeddin

Since I’m putting text now, I’m gonna ask, does the asterisk mean a pure class gets ANOTHER attack, thereby giving 11 attacks by the time the character gets to purple, or am I just a moron and it just means exactly the same thing the color change does?

a character with only a single class, with this BAB progression, gains an additional attack at this point.

That seems confusing, you only need to look at your total BAB and comparing it with the table that is in the NWN2 Wiki or the simplified version that i put here below:

For Initiative, reads this article from the NWN2 wiki which describe more in detail on how it works in NWN.

Yeah, that’s what I thought, until I saw:

A - the asterisk that said “a character with a single class”, which implied to me they’d get yet ANOTHER attack if they’ve only 1 class, for instance a pure Fighter

And B - the concept of flurries (not Flurry Of Blows) allowing up to 12 attacks per round, a limit that can still be exceeded under special conditions.

For Initiative, reads this article from the NWN2 wiki which describe more in detail on how it works in NWN.

I believe I already said I read up on it on the Wiki.

A - the asterisk that said “a character with a single class”, which implied to me they’d get yet ANOTHER attack if they’ve only 1 class, for instance a pure Fighter

Ignore that completely, what determines how much attacks you can do is your total BAB(normal attacks), not your BAB progression per class. This article regarding the BAB describes it perfectly. That example is using a full BAB progression because the classes that use that can increase their attacks per round faster(Fighter for example).

Flurry is a time unit, it doesn’t have to do anything on how much attacks per round you can do. Flurry is essentially when you character does the swing animation or slashing particle(AoO, Cleave, etc), Flurry 1 would be like the beginning of the combat round, Flurry 2 the middle of the combat round and Flurry 3 the end, your attacks per round are split evenly between this 3 flurries.

The maximum number of attacks normally available per flurry by a single character is 4, which can translate up to 12 attacks per round.

So the asterisk just exists to confuse me, got it, thanks.

I’d probably be embarrassed if this wasn’t something I’m used to.