Old Dragon but my crew is pretty tough. And i’ve been through this a bunch of times so, I know what to do. Dragon’s breath wasn’t working quite right because there was an error in its script.

those guards have ~100 hp btw. Dragon takes em down in 2 claws

I dig the buffeting

it does nifty tail-sweeps too.

how to test the real area of a firecone … 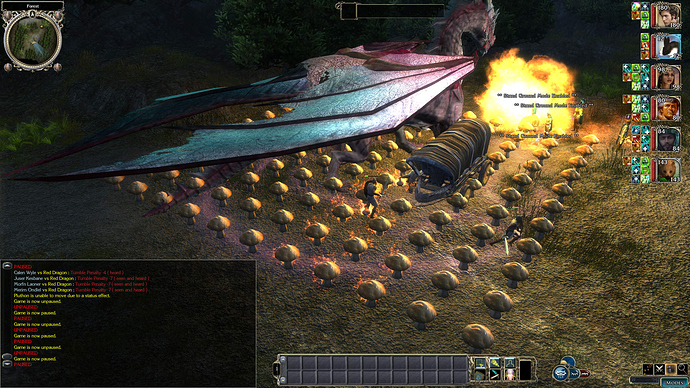 but – fed up w/ cone … switching to  glide  sphere

Oooooh … You knew this would grab my attention.

As you know, I have been working on some Examine GUI stuff, and I don’t want to “reinvent the wheel” if you have already done a lot of work. For instance, I notice you have used pre-examine text (what I have named PRE_DESCRIPTION_TEXT in my GUI code), which I have in place but have not yet implemented in any way. What you have done seems like a good way of using it. EDIT: Currently, adding text using it messes with my “mask” to obscure the OC CR info, which I need to do. So, it’s an area I let “sit”, but this video has made me want to look at it again.

Also, I note you have some interesting looking icons in the top bar, where I currently have the RANGE section of my code. What do they represent/do? It’s certainly something that piqued my interest.

It’s great to see others working on this kind of thing.

And the dragon AI is looking very cool … or not (due to fire)?

I would definitely be able to put that to use somewhere, even if it is not until module 3 … or unless you give access earlier.

EDIT: To avoid traumatization, I made the assumption that the rabbit burrowed away to live for another day.

EDIT 2: As an aside, I am trying to “tidy” the Examine GUI some more, as it has some elements that I do not need, and at my last messing with it, I still had not managed to alter it to how I wanted it. e.g. Remove the CR info permanently rather than simply mask it. (As it does not reflect my own system correctly.) There are also some “blank lines” that could do with being altered, but it’s a minor point I suppose. I just thought I’d point that out as your own coding in the same area may be useful to me too.

@kevL_s, if you don’t mind me asking what mod are you using in the dragon pic above?

I think you will find that is KevL’s own mod, which he uses for testing stuff. Whether it is to be anything else, I guess time will tell.

I’m sure KevL will step in and say soon enough though.

what mod are you using in the dragon pic above?

Apologies. Just been informed its NWN2 and I have EE . Numpty time again ! Sorry.

Pluthon is just fine. he/she has a way of bouncing right back (fortunately…)

Also, I note you have some interesting looking icons in the top bar, where I currently have the RANGE section of my code. What do they represent/do? It’s certainly something that piqued my interest.

(from left to right)

Retrieve Associates – some modules seem to incorrectly leave associates behind during transitions. This button retrieves them

Instant Slayer – kills a clicked creature for any reason …

re GUI Examine hostile effects … i’d imagine you’d really only want the code, not the gui-xml … you’ve got yer own thing going there …

–
If and when you want to try a dragon just give me a PM, Lance.

I notice you have used pre-examine text

am very pleased with the way that worked out, it’s 125 lines of code

I just got back from the “empty shelved” shops … goodness me, what a situation! At least it halved the shopping bill … and I guess I will be eating a lot of fish with no Ketchup for a few days.

We are, however, in God’s hands.

Pluthon is just fine. he/she has a way of bouncing right back (fortunately…)

re GUI Examine hostile effects … i’d imagine you’d really only want the code, not the gui-xml … you’ve got yer own thing going there …

That kind of thing appeals to me and it means I can finally make use of that bit of XML!

If I am allowed to download it, just supply a link and I will use/adapt accordingly.

i.e. The basic pre-text stuff (with HPs etc) would give me a starting point to work from. I would have to ensure all such would return the same so as not to break my “mask”, which would need to be “moved” to accommodate.

ICONS: So a few of them are just your testing stuff I see. Thanks for clarifying that bit …

WHISPER: I also found a very minor bug where I was deleting a (non-existent) string and not an int variable when displaying creature rating info. It meant some examined creature (e.g. villagers) were not being updated correctly. As I say though, it is a miniscule issue. I’ll “lose” that fix in any Examine GUI update for the modules. EDIT: Also fixed right-click quick cast spell info examine feedback.

Retrieve Associates – some modules seem to incorrectly leave associates behind during transitions. This button retrieves them

EDIT: Yes, I noticed this too in some of my wife’s playthrough with my module. I even wrote a small function to do a number check after a transition to warn the player, but I believe I ended up removing it due to some other point. I “think” I fixed it in the end, but I will keep an eye open again now. At least, my wife never reported any failing to transition since a few versions back when we first encountered it.

If and when you want to try a dragon just give me a PM, Lance.

I will definitely be needing dragon stuff for the last module, but if you do manage to complete it prior module 2 release, then I would be interested still, as I may be able to incorporate there too.

The basic pre-text stuff (with HPs etc) would give me a starting point to work from.

Thanks for those. I have DL to my laptop (not at main PC at the moment), so I do have them.

I will take a closer look in a couple of hours when I get back to my main computer.

I thought C_END would just be a shorthand for “color end” anyway, so it looks as though it was just resetting the colour, only to be changed again anyway.

I look forward to taking a closer look later …

By the way, I could not resist re-uploading the newer module version with the deleted variable and other spell examines fixed.

I thought C_END would just be a shorthand for “color end” anyway, so it looks as though it was just resetting the colour, only to be changed again anyway.

but there’s no color in the script to reset yet … the color that gets reset gets added few lines after that, however. It’s just poor style on my part it looks like

If the order is …

Then that would say to me that sRep has the previous string added, which would translate (longhand) to …

Which would mean the c_END is cancelling the c_GREEN before applying the c_DGREY … which is quite possible, as I believe I have done something similar in the past as it ensures the c_DGREY sets correctly. i.e. (IIRC) The colour may sometimes need this format to set properly. I cannot recall exactly where I did something similar to this, but I do recall having to use my equivalent to your c_END to make the colours work.

Anyway, if you say it works, then that’s what counts.

EDIT: I note in your examine.xml notes that you had some similar experiences as I did trying to work with it.

(E.g. Game freezing.) I do find that this GUI is one of the more “complicated” to work with … I think its because it feels quite heavily involved in many gaming aspects … and I added a few elements of my own too of course. It’s definitely a “handle with care” one for me anyway. Even now I can “break” it if I stress test it by the looks of it. Not sure why, but it works 99% of the time.