So! thought it was time and doing an interest check on what people think of my project and to inform y’all of the fun new PW that I am working on and giving some insight on what is happening right now. So as of now june 2020 I am working on a PW I call DragonBlood (Or DB in short) It will be a Roleplay/action fantasy world.

As of right now this new gameworld already includes some new custom content assets, roleplaying dialogue elements, and your actions will be remembered by the NPC’s that are roaming the world. I also included some subraces, and there are so many other things coming its way it makes me very excited!

I will be doing sharing what I already have done, and finished, as monthly updates. If you simply can’t wait for an update, I have every bit of information you can find on my website instead:

Much of the world is greatly inspired by games such as Witcher to Fable to elder scrolls and novels and books of all kinds including fellow D&D campaigns such as the D&D 3.5. These are just to name a few and I cannot stress it enough that they are simply my inspirations to the world and I have gone in entirely my own direction with this module.

The PW has its own little lore vault which you can be finding on the website though as of current it is very much WIP but as time will progress it will continue to develop. A lot of the races got their own twist and almost each race got their own little theory of the creation of the world and their own gods.

To summarize: Currently I am having hosting the server but only as a VERY EARLY Beta, testing the server with some friends to make sure everything is working correctly. So when the server will be open to the public I will be posting it on here.

The setting of DragonBlood (or DB in short) is taking place in the third age 1269 E3 (by human counting) on the island of Graene on the world of E’da. There has been an uneasy cease fire between the humans and the dragon. though now this fragile peace seems to be slowly falling apart as the human king Brennard Orinth, accused the dragons of kidnapping his daughter, princess Ayleen Orinth.

On the island of Graene is best explained to have vast mountains, deep and large vast forests where often many wild life exist and open fields where farmers can farm the land. It contains small feudal like societies that is often divided and irrigated for farming very similar to landscapes like an English, french, or medieval German countryside.

The era itself is very much comparable to the medieval period though in this time there were starting to get a lot of breakthroughs in regards to development of farming and working.

The plot so far:

The plot will take place in a vale of Graene called Fergana (Pronounced: Fer-gah-nah) where the player will get to decide there race and will decide what kind of person they will be based upon their actions upon the world.

The player can choose to explore the world and learn more about its secrets! There are already several (and more coming up) secrets that will explain more about the past and the world and perhaps even about the king’s daughter…In short it is an adventuring world, with classical dungeon’s and dangerous factions to fight… or even join. The idea is to want to shape and create your character around an established game world that moves ever forward

Create an immersive rpg style gameworld with the following systems

[DONE] Inn-system (Don’t have a place to stay? Stay at the local Inn!);

[DONE] Guard system: Keeping the streets safe and/or protecting a place of interest;

[] Transportation system (A fancy way of traveling, not on foot or by horse but with a carriage!)

Will post some screenshots of what I made soonish! 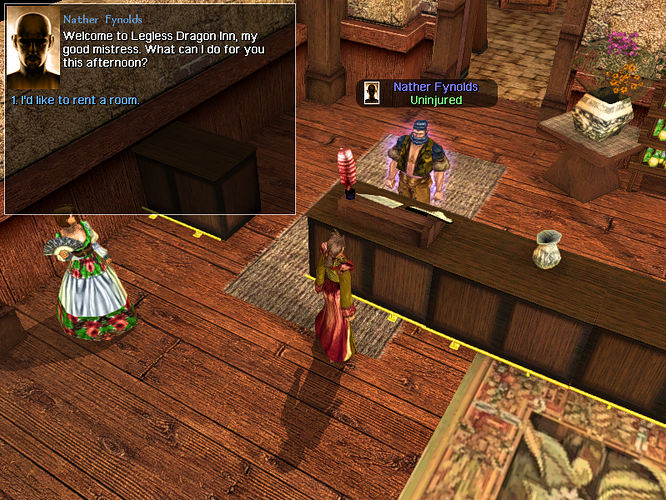 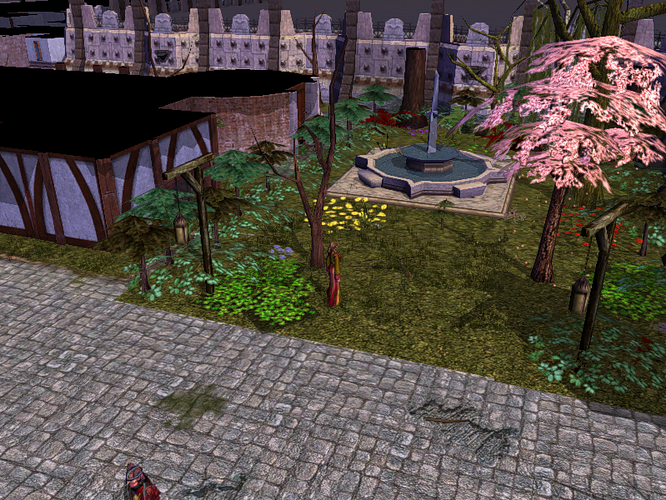 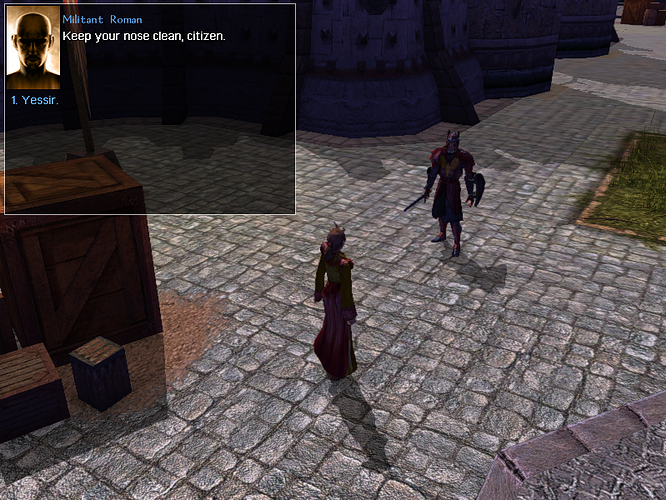 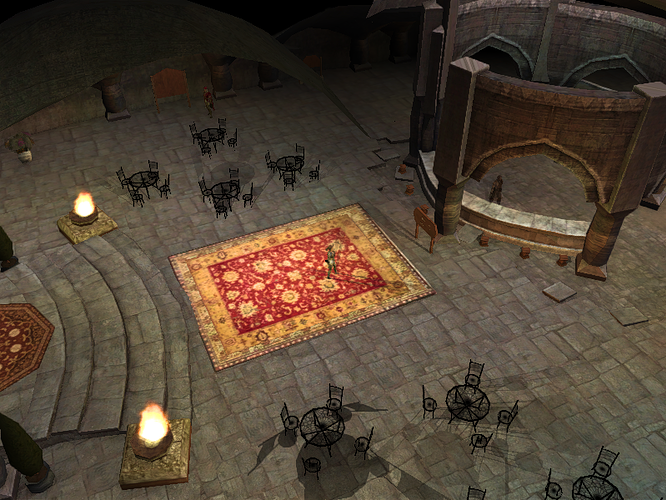 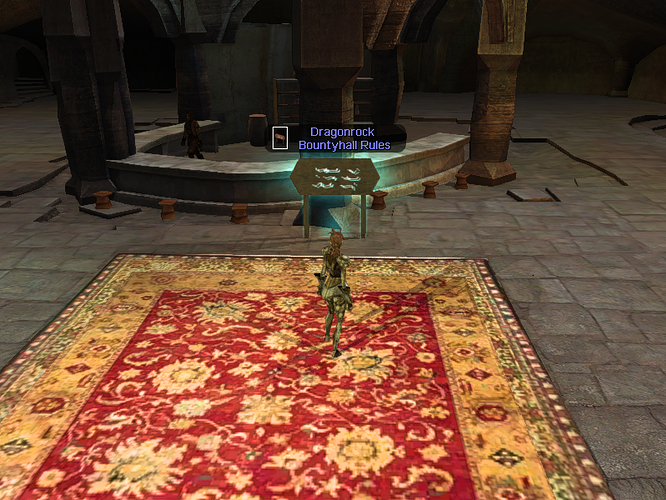 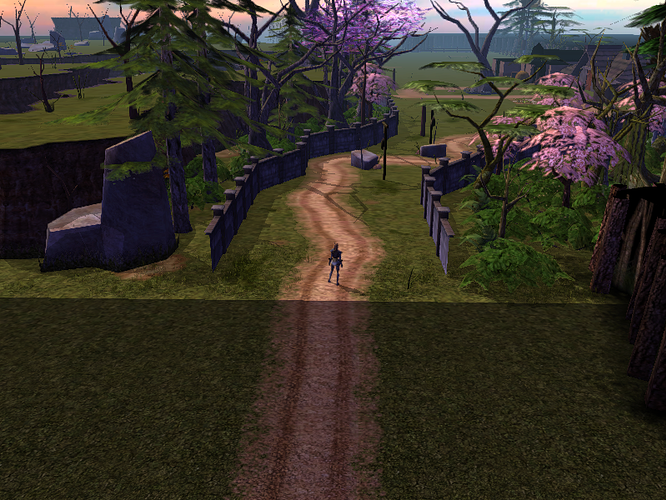 A couple of screenshots of some of the area’s and systems. More coming up as I keep working on the module <3

Typo in the screeny with the carriage vendor. You have “Don’t you wan’t to walk?”. “wan’t” should be “want”. You actually could use “Don’t want to walk?” as it’s perfectly valid.

Yes i noticed the typo after posting. Ingame it has already been corrected. My quick gingers sometimes go too fast

So! I am pretty proud what happened in a month!

The module has made some more progress, worked some more on the lore of the world and the creatures living there. on the website it has some additional info on the systems that the world is now having! Slowly the world is progressing to the point where I feel it can be tested!

I have currently been working mostly on the bounty system with help of the fine folk of the NWN community!

There are now a ton of new areas and we got a coach system working perfectly fine and our bounty quests (non story driven) upto level 5, granted that is only a small portion of quests so far as there will be a total of 120 quests and now I only done the first 10 so 110 to go! 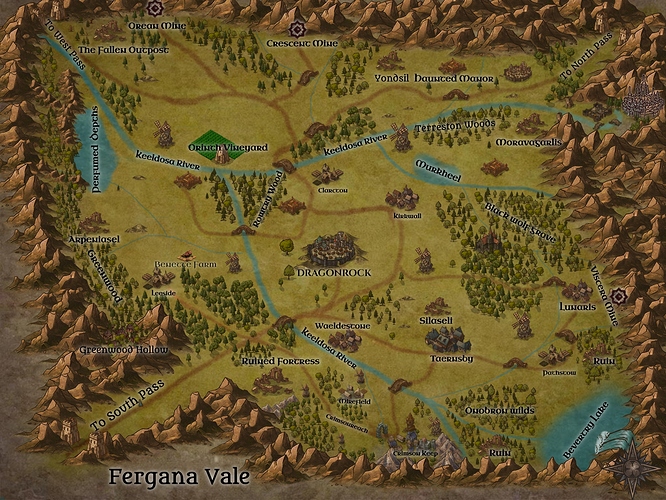 If there are any scripters and builders want to help out with this project I more then welcome it!

Hello everyone! Here I am again with another update!

Basically the progress is rather slow as I am the only one working on the project and real life has been a bit of a pain sometimes. Nevertheless I did manage to create quite some content.

For now I am focussing myself on the bounty board and the completion of all the 120 quests that players can do while getting to max level. The module is starting to take good shape and it is starting to have a good feel to it.

Most of my time has been going to write down interesting quests for the bounty board and also adding bits of lore to the website. While it is FAR from completed it is starting to show some good promise and I am hopeful to publish the updated website somewhere mid to end of next month.

The bounty quests are taking good shape and currently you can quest upto level 10 and as you travel through Fergana you will meet a lot of different creatures. Some you may know as the standard races and some that are slightly different.

While the module is far from completion I must say I must admit to be a bit proud that I managed to achieve with some help from this forum.

When I have a bit more time I will be making screenshots of the module so everyone can view the progress and see the different areas that have been added.

Once I finished the bounty board I will start with some other things I always wanted to add to the module and to create a sense of freedom for the player. Creating actual consequences for the actions of player characters.

While I love working on this I know I cannot do it alone and am therefore looking for some good scripters that are willing to help out to make this world truly come alive! Also some area designers and dialogue/quest writers are more then welcome. Any help would be greatly appreciated!

So if you feel you like the general idea behind project that I am working on and want to help out then just let me know!

Depending on what you need, I might be able to help. Send me a PM with some details (i.e. how you’re collaborating, systems/code you need, etc.) or find me on the vault discord.

Well time seems to be flying by and got to say there is some good progress being made and mostly on the lore section of the world. I have managed to add some more information to some of the deities and others will still need to be a bit more fleshed out but that will be done in time.

The world is being built a day at a time and thanks to Tinygiant there is a lot of progress being made by the means of scripting and I am learning so much! So thank you for that!

As I continue building I lay the main focus on the lore of the world and making progress with creating Fergana and completing the 120 quests the players will be able to do via the bounty hunter guild and creating the world in a way that every player will be able to leave their mark on that world, be it good or bad…

People are more then welcome to check out the site and the updates for this and if they wish can always join the discord! (This info can be found on the website)
https://dragonbloodnwn.wixsite.com/home

There is still room available for people to pitch in if they want to or feel free to ask me any questions they have either via discord or over DM’s on here! I hope that soon I will have more to show in pictures for everyone to show off the progress being made

Create an immersive rpg style gameworld with the following systems

[DONE] Inn-system (Don’t have a place to stay? Stay at the local Inn!);

[ 13 out of 120 DONE] Bountyboard (Earn some extra coin by doing quests from the bounty board! There will be a total of 120 quests for you to enjoy via the bounty board.);

[DONE] Guard system: Keeping the streets safe and/or protecting a place of interest;

[] Jobs (Do jobs to earn some extra coin and/or XP)

[] Transportation system (A fancy way of traveling, not on foot or by horse but with a carriage!)

[] Guilds (Players can create their own guild!)

[] ARENA (This will be mostly for RP elements but will also have some PVP options. Players can join the arena as a combatant to combat their friends or fight NPC’s for renown and some extra coin)