Hello, this probably has been asked before, but I coudn’t find a clear answer, so is it possible or not to use the elf (thinner) body type for a human somehow ?

In which context? Do you want to use a proper human race with a built-in elf body or a thinner model version of regular human?

For the first, just change the appearance. NPCs prepared in the toolset can be modified right there. For PCs and runtime creature modification, you’d use a script:

This does mean however that you won’t be able to attach human head to this body. There might be a human head pack for elves (scaled down), but I also haven’t seen it in the Vault.

Surely someone will link to a script project which allows interactive (in-game) character customization.

Second approach: I’m not aware of a thinner human (or anyone) phenotype than the standard (aka thin) one.

You could also try

do scale down the human a little bit. Does not make the human thinner but smaller. Drawback is that moving/running becomes a little bit weird if you scale down too much because movement speed and animation do not change but step length has. Requires EE.

Surely someone will link to a script project which allows interactive (in-game) character customization.

Such a script project is for example this ;): Customize Character Override HAK (CCOH) | The Neverwinter Vault

Scaling human heads down to fit onto elven necks works too:

I was some head mdls that look huge. Any trick to scale them? Thanks a lot.

@Grymlorde linked up there to this tool - you may find it useful:

It is possible but it is a lot of custom work, with limitations, the elf skeleton is very narrow
The funny thing is, and this part will sound like shameless self promotion, I am actually working on one and taking suggestions here: Stonehammer's Body Rebuild major update

If you want to go for elf body with human heads, my custom heads are usually made for all races

Thanks for all your answers ! My husband’s mage is supposed to be human AND skinny, that’s why I’m looking to see if we can make him look more like he should. 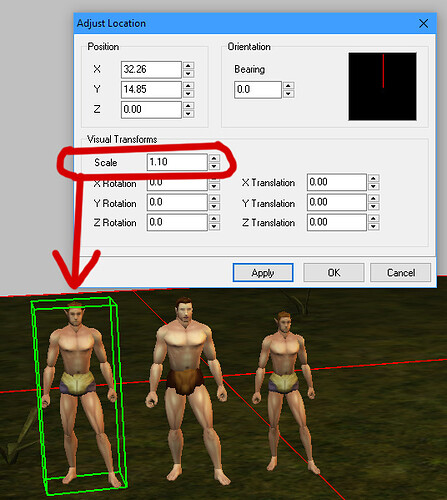 Now you have a human sized skinny guy.

There is probably a script to do this but that is beyond me at the moment.
edit: @NWShacker’s script above should work and you can add something like:

SetObjectVisualTransform(oPC, OBJECT_VISUAL_TRANSFORM_SCALE, 1.1, TRUE);
(I did not test that script by the way, I just cobbled it up and it did not say error on compile)

Note: these are custom parts so my elf is not very skinny