Howdy,
I have a goblin lookout who, when perceives a PC, runs to an exit waypoint where he vanishes. All good.
However, on the way there, he crosses a custom encounter trigger which is supposed to spawn three more goblins as if the lookout had alerted them.
Sadly, said goblins obstinately refuse to appear!
The encounter trigger is set to Single Shot, 3 Max/3Min (unique instances), Active, and the Player Triggered Only box is Unchecked.
The encounter faction is set to a custom faction which is hostile to the goblins (hostile themselves).
I have tried using stock opposed factions such as Defender, but an article in the Lexicon by Maxam says that doing this might not work.
He is not wrong…
Am I doing something dumb, or is this a known issue?
I have searched both here and on other sites, and have gone through all of my toolset and building info, but to no avail. Any tips/advice would therefore be extremely welcome.
Many thanks,
Mr T

Remove the encounter and replace it with a generic trigger. Then write a simple script to spawn in three goblins when the lookout enters it.

And unchecking the Player Triggered Only checkbox under Advanced doesn’t work? 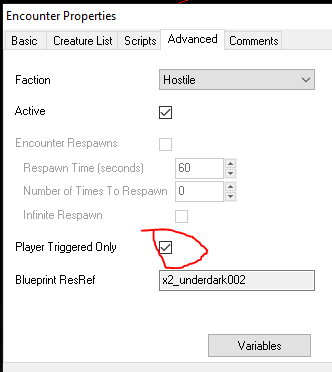 If the faction of the encounter is hostile towards goblin and viceversa it should work. But I won’t be really suprised if it won’t despite the setting is correct, encounters are extremely limited in functionality…

Thank you, good sirs, for your advice.
I have cobbled together the following script (and was VERY surprised when it actually worked!!)
However, as Shadooow suggests, I REALLY want to delay the spawning of the reinforcements for seven seconds following the despawning of the sentry.
I have fiddled about with such things as DelayCommand for a week or so now, but to no avail.
Any pointers to getting this right would be very gratefully received!!