I am noticing lately that some vanila nwn spawns on my PW are not activating. This is longstanding issue and I think it was happening back at 1.69 too. I tried to repaint them but it doesn’t seem to have impact. 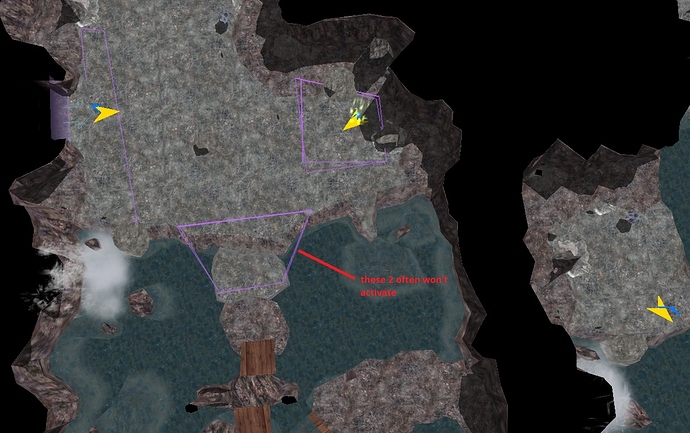 I am sure the spawns are painted properly, I know that if you don’t pait them “over” the whole walkable area it is possible to not spawn them when walking via mouse. But this is not the case - see. image.

This is the current spot I saw this to happen several times. Other players reporting it elsewhere.

Seems to be much frequent with high level monk but the last 2 times it happened to me in the area on screenshot I had non-monk character.

It is definitely not caused by connection to the server since I play from LAN. Server is running smoothly no lags (at least for me on LAN again). The HW is pretty decent and currently my server is not having much players at all. So it is not because it got lagged out with too many players it can handle.

Anyone saw same issue? Maybe even in singleplayer? So far I have no verification if this happens with triggers - seems that it doesn’t, but it is not 100% guaranteed info.

in my experience, spawns hat a bit of a own life, they need to scale the difficulty to the player.

As I can see, you have 2 spawns at the same place. What is spwawned? What’s the difficulty? Is it one time or repeating? If It’s repeating, whats the grace period? Are there other enemies nearby?

Maybe you could try to set them separately, not on one place?

Almost all spawns on my PW are setup so they always spawn same npcs. There is usually only one npc in group. This is the reason why there are two spawns - to enforce that always 2 npcs of one type and 2 npcs of other type will spawn and not some random mix which would have happen if you put both npcs into the encounter (and made sure they have same CR as if they didn’t it wouldn’t be random anymore).

So the difficulty of the encounter nor player level is relevant here. I just thought of a way to debug it though. Will see if that works.

Just make sure they are vanilla encounter triggers and there is nothing in your OnEnter event.

Also, check to see what creatures are actually populated in the spawn list. I have seen cases where reorganized creature palettes caused the creatures to disappear from the Encounter Trigger creature table.

Yes, yes, yes. It is not happening always. In fact is it extremely rare occassion. It happens thorought whole module on certain spawns which are exactly the same as others in same area. I simply choosed this screenshot to show you that the encounter is painted in a way it cannot be avoided. No jumping or leaping available on my PW.

Here is a screenshot of all related encounter properties so we can go to the real issue. In all cases when this happened there was just one player without any summons or associates. Also, walking back and trying to step into the spawn again will activate it. (Didn’t test on this exact encounter, but in another area with another spawn it worked.)

I added simple debug OnEnter script that will print me some basics. Might take a while before I trigger this again since I don’t play much anymore, but should help me investigate it.

As I see it there are only two possibilities. Either the geometry doesn’t recognize me passing through. Or it won’t get resetted after exhaustion properly - which is more likely cause anyway.