Event Scripts Not Firing in Module

Hey all, I have updated a module in the toolset to fire a script on heartbeat in module properties, saved it, but the script does not fire in-game. I’ve done this in several other modules and it always works, but not this time. Is there any way module event scripts can be overridden from the campaign folder or something?

Edit: I know the scripts themselves can be overridden directly, I am talking about what the event scripts are set to. As in inside module.ifo.

I know the scripts themselves can be overridden directly, I am talking about what the event scripts are set to. As in inside module.ifo.

the scriptnames that you see in Module.Ifo can (possibly) be overwritten with the function

… not likely but possible. So the usual checklist: Is module saved? Is script compiled and someplace accessible to the engine when the module is loaded?

ps. note that if your custom script is in the Module directory, it won’t be used when loading a saved game …

Thanks for the reply!

Script is set in module properties correctly (confirmed set in module.ifo), module is saved, script is in override (tossed it in the campaign directory too for good measure), no duplicate script is in any of the associated haks. I grepped the campaign folder for SetEventHandler earlier and nothing came up. I will check the module folder for it too.

Checked for SetEventScript as well. Not sure if that is a thing anymore in NWN2.

This one has got me a bit stumped!

I use a console script to get/print eventhandlers (just to see that they are what i think they are). It uses →

but while it works for most objects (creatures, placeables) it only returns blank strings (for me) when passed the Module or an Area …

ps. SetEventScript() doesn’t seem to be a thing in Nwn2.

no duplicate script is in any of the associated haks.

and no dupe in /override? … it’s gotta be something silly :)

you could try forcing the script from the console …

I know, it is always something silly. The Development folder is both my best friend and worst enemy in NWN1 as I am always leaving conflicting things in there. I’m sure it is something similar here as well.

Does SetEventHandler work on the module?

huh apparently not. Just tested with these:

The heartbeat script is just not firing. I made a brand new script to wrap and fire the hb script I am trying to run (and signal that it is running), added it to the module heartbeat event script and saved:

I thought maybe it was an issue with GetFirstPC not working, but I made a script to test it and it worked like a charm when I ran it from the debug console:

Am I losing my mind? Can the module heartbeat event just be disabled completely?

Also, I thought triple single quotes made it appear as a code block on this forum, is that incorrect?

That depends - there are 2 different types. Use

(on the UK keyboard that is the key with the @)

Can the module heartbeat event just be disabled completely?

not that i heard of. What module/campaign are you trying this with? if not your own, try setting things back to stock with a clean /override (under both install and MyDocs)

[edit] again on a longshot, an unusually long (or perhaps too short) custom hb-rate could be set

Hey all, I have updated a module in the toolset to fire a script on heartbeat in module properties, saved it, but the script does not fire in-game.

Just to clarify, do you mean you edited a copy of the module’s HB script, by adding an ExecuteScript function to call another script from the module’s HB script? EDIT: Also, if this is what you mean, does the executed script require any additional library include files? EDIT: Also, as an example, some “campaigns” may also have more than one module HB script involved, each one running depending upon which module is currently being played. i.e. The module HB script you are trying to alter may not be the one currently being run. (The OC has a number of module HB scripts.)

If so, I just tested with my own module (campaign structure) and, as expected, it worked in a saved game I had. I had placed an edited version of the module’s HB script and its accompanying script to be executed in the override folder.

Did you remember to copy the script you wish to execute into the override too? Were there any typos? Did you exit the game completely before testing? If you apply this kind of update with the game sitting at the Main Menu and then load the game, I have known it to not pick up the alterations you have made in the override folder. So, be sure to exit the game completely, make changes, then start test again.

I am also trying to understand what you are trying to do exactly, as it seems you recognise scripts can be directly overridden, but then appear to be asking something more specifically about object scripts.

Can you give a bit more detail about what you are trying to do? What is the module, and what script are your trying to run?

There may be an alternative means to do what you are trying to do.

Did you exit the game completely before testing? If you apply this kind of update with the game sitting at the Main Menu and then load the game, I have known it to not pick up the alterations you have made in the override folder.

a resource freshly created in /override requires that the game be shut down and restarted from the desktop.

a recompiled script that already exists in /override requires a restart, reload, or perhaps just an area transition

Try having the ExecuteScript fire on the PC … (This worked for me.)

This way, you can completely eliminate the original HB script and execute your own version, executed from the original.

Just remember that you will need to redefine the MODULE from the new script, as OBJECT_SELF will now be the PC.

NB: If you need other “existing” variables to fire from the module HB, then just edit stuff into the new executable, paying careful attention to what is the module and the PC within the new executed script called from the original module HB.

OK, to answer all the questions:

(Seriously thanks for the help - I am mostly doing this to test changes I have implemented to Kaedrin’s/Tome of Battle across many different modules/campaigns, but the fact that I cannot figure this one out is driving me nuts)

Sry to say but for me worked fine first try … 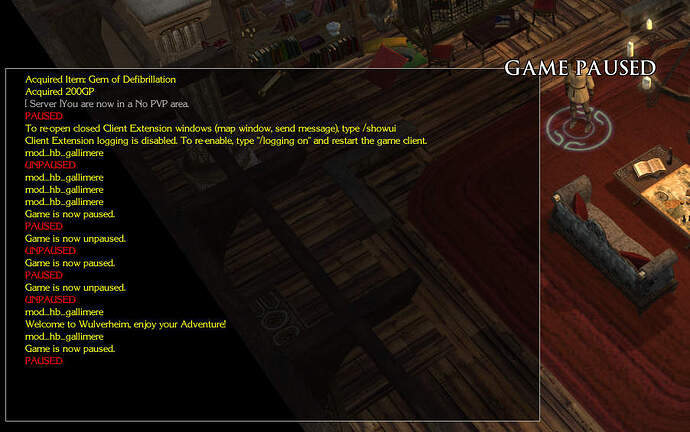 Aside from the new documents folder, that is exactly my process. Your modules for that campaign are directories, correct. Not .mods?