Just seen that Stan Lee has died at the age of 95. 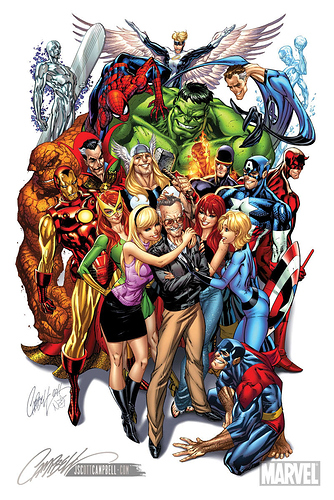 One thing I should make clear. I did not create that picture. It is from deviantArt here.

he lived a long life i wish i could grow to be as old as him one day, he mustve lived a great life, rip mr Lee

Clicking a “Like” button on that news seems so strange. But, giving it a litle more consideration - yeah. This person made a significant, positive impact on the lives of incredibly many people. He and his entire team gifted the world a view on heroism that teaches “Heroism isn’t about being flawless and perfect, not about being the strongest or the smartest or the best and so much above all others that success comes effortlessly to you. It’s about continuing to try to make things better, to help, to protect, when things go sideways and it looks like you’ve bitten off way more than you can chew. And then, when the current crisis is over, you go home again. Life isn’t all about the strife and the acts of heroism, you know! Don’t forget to play and have fun!”.

How many parents have asked their kids, when they were scared of… I don’t know, their first day at school, facing up to a bully, or sickness or surgery or whatnot, “What would (insert favourite superhero here) do?”, and the kid found an answer that they could relate to, that could actually help them with the struggles in their own lives, because their heroes weren’t infallible? How much laughter and hope and comfort have these stories brought to people, young and old alike? I think I’ll be marvelling at that thought when seeing people in superhero costumes, for the forseeable future.

Ever upwards indeed, Mr. Lee. With great power comes great responsibility, and it seems to me you’ve used yours well.

Considering his age, I guess it was time for him to go…

I always thought the Marvel Universe was a bit extravagant (I’m a bit biased towards DC). But Stan’s contributions still deserve to be acknowledged all the same. RIP, Stan.

I met Stan Lee at a comic book convention in 1977. I found him as energetic, charming, and articulate as any of his Stan’s Soapboxes. And yes he was quite fond of alliteration. I am grateful for the work he created with the likes of Jack Kirby, John Romita, Bill Everett, Steve Ditko, Don Heck, et al. 'Nuff said!

They’ll write him back into the storylines. It was probably a clone, or an astral projection, or a Doombot that “died”.

Yeah, it must have been an LMD - a Life Model Decoy. First described in Strange Tales No. 135 (1965) featuring Nick Fury, penned by none other than Stan the Man himself and illustrated by Jack King Kirby.