Am I stuck with the standard rural tileset if I want to build an area that is a mixture of trees and farms? What I am after is a tileset that is easy to use with a low learning curve (i.e. not any based around LoW’s SF). Oh and it must be good for chickens too

Thanks for any suggestions.

I think the “Castle Exterior - Rural” tileset is the one you want.

It’s not vanilla, but it’s standard in that it’s included in 1.69

The Project Q version of TNO (castle exterior rural) has ploughed fields and cornfields as terrain options. They are reworks of tiles made by Den of Assassins.

Thanks for those. I decided to go with the standard rural tileset in the end. I tried others and overrides but they all seemed a bit too dark in EE.

Haha yeah, those later additions are outright grimdark compared to the brightness of vanilla NWN. It even has crows cawing as the default ambient sound.

Since you’ve written tutorials on scripting and are asking a pretty basic question about tilesets, I’m going to assume your experience is 99% scripting and 1% building, so I feel I should share the NUMBER ONE TRICK I’ve discovered when it comes to designing areas. Maybe it’s already common knowledge, but in case it isn’t, here you go:

Lowering placeables into the ground. It’s a lot easier to describe with a picture. 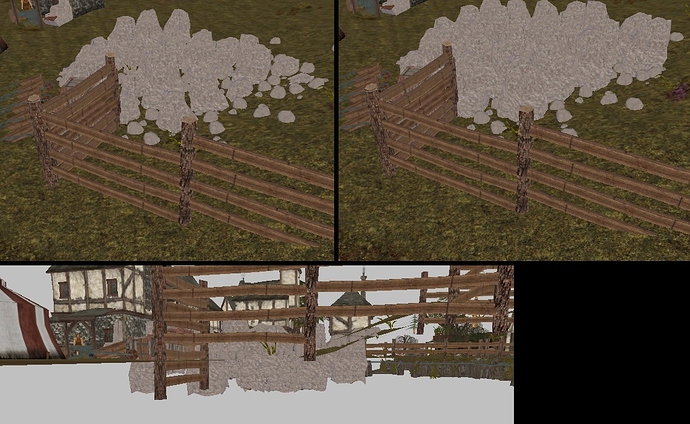 That particular quarry is made out of only two different placeables. No amount of rotation is going to make it look like anything other than rotated placeables, but when you combine the rotation with varying lowered elevations you enable a much more natural appearance. It’s also how I got the boards of the fence to line together, as you can see the rightmost part goes into the ground.

You can lower trees into the ground so their roots aren’t in the way, or to have identical trees next to eachother vary slightly in height… You can even place candles that aren’t two feet tall and that haven’t just been lit.