I have this idea for flying for PC’s.

Use a widget to activate the flying pheno then the jump into the sky animation …then it takes the PC to a specific area (sky tileset) perhaps like how a stone of recall takes you to an area. All of this in one widget. I have no idea how to do this widget that would do all three (put into flying pheno, then jump into sky, then teleport to waypoint).

From this sky tileset you would have other connecting sky tilesets. All linked that are a representation of your world map below. Perhaps one sky tileset can equate to four earth tilesets below (four transitions each one going to one below to simulate fast flying travel). So you can fly to a city or town or mountain anywhere in your world rather than walk or take a coach or go by sea. Of course this would be only for PC’s who can fly or use an air ship or fly potion (that upon drinking it you could gain this widget to fly?).

No one should be able to access these sky tilsets without this widget in their inventory. Perhaps script this on the OnEnter Event Script to boot anyone not having this widget? I wouldn’t know how to do that either…lol

I miss the days that people like me could download cool .erfs people would have all this packed into for us to put into our modules. I was wondering (since this is beyond my skill sets) if anyone would love to upload something like this as an .erf to the vault here.

Anyone know of a good sky tileset too?

Best sky tileset we have is: https://neverwintervault.org/project/nwn1/hakpak/tileset/sky-tileset

Thanks Mecheon. I had seen that one. I can’t wait till you update it. It looks like the rural tileset with just a reskin of white on everything. I was kinda looking for a flat ground of pure blue (maybe clouds) on the ground. Then use placeable clouds on the tileset. You know what I mean? Just basically a box with nothing but blue sky all around (floor and walls) with clouds around the walls. Not sure if you ever saw the tileset for the coach where it simulates terrain going by the coach window…would be cool to have a similar tileset on a bigger scale…so it feels like clouds going by you…

You might want to consider Flying Carpet Pheno by Ben Harrison. Alternatively you could couple Demangels Dragon riding system! with my Map Mats. There is also another system that involves an invisible placeable but at the moment I can’t remember what it’s called or who created it and I won’t have time for several hours before I can get back to looking.

Found it. It’s the Sanctum Flying System by Andarian and Estelindis that is one of the submissions for the Custom Content Challenge 2012 Nov - Sea, Air & Land Travel project. Most definitely worth a look.

Thanks bud. I do have the flying carpet. I had a flying dragon implemented but has been broken somehow for a bit. I think I will take a look at that link for the flying dragon and see if I can get that to work too. As for the mini map…I sure would love to have that…thanks for the links.

Any idea how to script the above widget to make one go into the flying pheno then jump into the air then port to a waypoint? That is beyond my skills.

What you’re describing is exactly what I did for Sanctum of the Archmage’s custom “Flying System.” It’s used in Sanctum 2 (The Sight), and extensively in Sanctum 3 (which is still under development). It’s used in exactly the way you describe: use an item that invokes the flying power, and trigger a cutscene to transition to a flying area. I did it both with pheno switching and launching into the air with the jump animation, as well as taking off from a roof or a mountaintop with ridable pegasi. I also made use of a custom “Flying Tileset” (developed by Estelindis). You can see some of the animations in action here:

As for how to do it: the easiest tileset to implement this with is NinjaWeaselMan’s “Space Tileset,” which I use in Sanctum 2. I’ve got to get back to work right now, but I can follow up with more details a little later.

Here are a few suggestions to follow up. Although the story is protected by copyright, I’ve always been happy to share any of the scripting systems I’ve developed for the Sanctum saga. So feel free to download Sanctum 2 and look at how I did these things. In particular, if you find the blueprint and script for the cloak of flying, it’ll show you how I coded a cutscene that (for the pheno version) generates a special effect to obscure the pheno transition, initiates the “jump” animation, and then jumps the player to a waypoint in a flying area. I can go through it in detail later if that’ll help.

As for flying areas: If you use the “Space Tileset,” it’s easy to set it up to look like you’re flying in an empty space with nothing but clouds around you. (The first video on the Sanctum 3 page illustrates this too.) If you look at the “Flying to Rayche,” “Flying Over Rayche,” and “The Storm” areas, you can see how I set this up.

If you get ambitious and want to try using the Sanctum Flying Tileset, let me know. Este and I released it to the NWN community with one of the Monthly CC challenges years ago, so it is availabe for people to use.

EDIT: See Tarot’s edit – he found it. The example areas in the CC Challenge post are probably easier to understand than trying to work through all the content in Sanctum 2.

Hey Proleric in that “Custom Content Challenge…” where you have the flying stuff…you forgot to upload a demo module. So I can’t see how it works bud.

Did you read the ReadMe?

You just need to add the 2da lines and import the .erf - it works just like a horse. 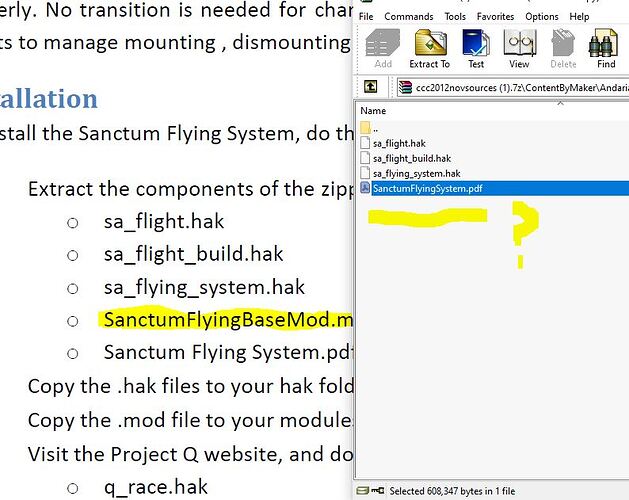 That’s Andarian’s stuff, not mine… my files are in the 2014 Gothic link source (see above)

Ok thanks. I will take a look at that

The sample mod was supposed to be included in the stuff I sent for upload. If it’s not there then that’s a mistake. It’ll take a little looking, but I should be able to find and upload it.

EDIT: OK, that was faster than I thought. I’ve put it up for download here.

Says file is damaged blah blah blah…could you please reupload it on the vault. Thanks Andarian

That link works fine for me. Make sure you click save link as so you OS does not think it’s a video or something.

Missing Custom Talk Table error when trying to load module to play it. It can’t be Q or CEP as they are installed. Error log doesn’t say which tlk file it is either.