Dropbox is a free service that lets you bring your photos, docs, and videos anywhere and share them easily. Never email yourself a file again!

This project is now live!

“Evil times have befallen the lands of my liege the Earl of Sterich. Our homes, the lands of a strong and free people have lived for centuries in the shadow of the great western mountains. We have defended ourselves from those enemies that would come from the west. Our swords and our lances have been our strength. But now our strength is weak. Greater force than that with which we can contend descends upon us. Giants roam our homelands, driving us further from our western borders. Dark figures ride in the night. The wise among us feel plots unfolding beyond our understanding.”

This is a remake of the 1978 TSR Modules G1-3 by Gary Gygax and a sequel to A1-4 Scourge of the Slave Lords.
Your same character may be used or create a new one.

For level 12 parties of 4
Import your own, use the provided companions, or a mixture of both.

I recommend the use of crafting to improve your equipment as some encounters will be quite hard.
The provided Mage Companion is a good crafter.
Charlie Vales Item Modifier has been implemented but it is quite expensive. 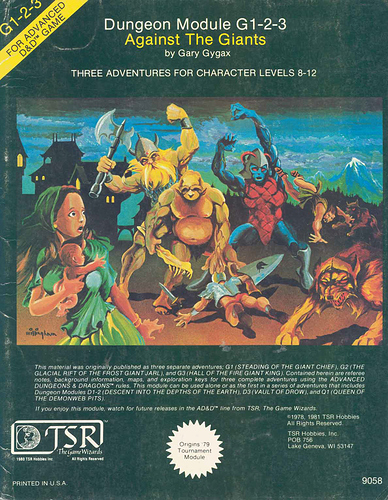 You know, I think still have a beat up copy of these in a box somewhere but I never actually played or ran them…

I can offer playtesting later this month. I should have a goodly chunk of time over the holiday break, other commitments allowing. What sorts of things are you most looking for? Just a bug hunt or spelling and such too?

I’ve played up to the end of the Steading.

A few notes off the top of my head: One thing I would add are more map notes. I’m one who likes to wander around quite a bit and it took me some time to find the exit on the Area map of the Hill Giants.

The story line is pretty linear so far . . . which is fine.

The feeling is more hack and slash . . . I’d try to add more “flavor” in the conversations . . . maybe add a couple individuals to express the desperation of the situation rather than just the commoners standing around (could include some side quests with these people). More refugees inside/outside the city . . . food running short (rations cost double). Side criminal activity breaking out - desperate times call for desperate measures.

The refugee tent city could be a good place for some of this.

Could include something with the Orges running around. Maybe they are stockpiling their food in a cave, or maybe trolls stole the food they had stolen. Just a couple ideas to use or not.

I’m not using the built in companions so I’m not sure if they add conversations.

Why doesn’t the innkeeper offer a room for the weary travelers?

Hi Quixal, thanks for the offer. I’m looking for bugs and opinions about stuff. What did you like, what did you not like. Just play through and let me know what you think.

thanks for the notes Sawdust37 and the great suggestions.
keep em’ coming.

Oh and . . . when I kill a dragon I expect at least one dragon crafting material item . . . please!

Check all of the cohorts. It looks like they may have more ability scores, skill points, and feats than they’re supposed to have for level 12.

Freda has the longbow proficiencies but has ranger 2-weapon fighting. I’m thinking she should have archery.

Karraway has the Air/Animal domain bug.

Area: lonely_inn - Set the spiders to lootable corpse TRUE. Their loot bags are under the floor otherwise.

Area: village1 - The wolf encounter trigger is set to Active FALSE. Not sure if that was intentional or not.

Area: wr1_west_road1 - The 2 large rockface placeables in the North East corner are floating too high (noticeable from the cave).
Also, near those rockface placeables is a boulder pile placeable with a walkmesh cutter around it. That placeable is partially floating.
There is a tree set (ColumnarOakC) in the South West corner that is partially floating.
Set all ogre mages to lootable corpse TRUE. Their loot bags are under the floor otherwise.

I’ll take a look at it next week.

you guys are awesome, I really appreciate the help. When I finished scourge of the slave lords, I couldn’t find anyone to play it for me and ended up releasing it untested and full of bugs. I’m thinking that this release will have a bit more polish.

Kevl worked up a fix for the air/animal domain issue, should be on the vault

I think we just hashed it over in a thread, kamal… i remember talking about it, but i think it was a solution on a thread about Archetypes.

it might have been something as simple as calling ResetLevel

Area: wr3_javab_river - There are many tent placeables set onto steeply sloped terrain. This makes them look like they are partially floating.

Area: wr4_farm - The guard who talks to you will say the same thing if spoken to again and again.

Area: is_templepelor - The Cleric of Pelor does not take the holy symbol from you if one of your cohorts has it. This causes an exploit where you can constantly talk to the cleric and get more gold from him. To fix this, in the cleric’s dialog, replace ga_take_item with ga_destroy_item ensuring it checks the whole party.

The glacial rift caverns are not “spatially” correct. For instance, the first two caves on the left as you enter appear to be right next to each other but instead the interior sizes show a great disparity between them. I would try and make the outside area comparable to the interior areas.

Another suggestion would be to add some comment triggers when you run into the “visitors” of the different giants or other anomalies that might be connected to the “mystery” plot line. For instance, have a trigger spring a conversation when finding Frost giants in the Steading that asks the question what are frost giants doing here? You can use a built in companion or just a cut scene with a camera pointing towards the giants. I think this is important especially because you have set it up as a linear game. To me a linear game should have more story than a sandbox game.

Area: steading_ext
There are a few floating trees in this area.
Check the sound objects here. Some of them seem out of place (i.e. flame sounds, but no flames).
Set Dire Wolves to lootable corpse TRUE. Their loot bags are under the floor otherwise.

Area: steading_upper
Various tables and benches need walkmesh cutters as you can walk right through them (I think some of the cutters got corrupted. They are showing up as waypionts in the area contents tab).
Snookums and Throat-ripper need lootable corpse TRUE. Their loot bags are under the floor otherwise.
Many of the containers need to be set to plot TRUE. If they are destroyed, their loot is under the floor otherwise.
The locked door between tiles 11,10 and 11,9 is not perfectly set (snapped) in the door frame. This allows you to see into the room before opening the door.
If you release Buggug, he just disappears. I think you intended them to run out of the room. His convo file (stu20_orc1) needs a waypoint set in the ga_move_exit script.

I can’t leave the glacier. Went into the editor and it looks like the exit transition links to a non-existent waypoint. Also, Olgani is still with me . . . is there a trigger to take her from the party?

to leave the glacier just use the recall stone and Olgani should leave after returning to Istivin.

I appreciate you guys being so thorough. Keep it coming!

Area: gr_lower
Tile 12,11 looks wrong in-game, but looks fine in the toolset. Maybe replace the old tile with new copy?
Tile 10,20 has a breadbasket container but I’m unable to access it. Set its hit points to more than 0.

Area: istivin - Alvan won’t tale the Rivercrest Sword from you for his quest if one of your cohorts has it. Replace ga_take_item with ga_destroy_item.

Area: is_fiddlingviceroy - There is a set of floating dice in tile 4,4.

The rift was good fun. Lot’s of fighting! Nice areas.

I forgot about the recall stone . . . as I said, I like to wander throughout the map. I know Travus has been keeping you up with the lootable corpses so I have not pointed out any BUT I would go back and check most of my creatures just to be sure. Also, some of the triggers are very close to the spawn points. It kind of eliminates the advantage of the survival skill for tracking enemies (a big advantage for Rangers). You might want to mix it up a bit with the encounters, or pull the triggers farther away.

Quite a few floating dice in the Hall of the Fire Giants’ treasure room. One chest (the locked one) can not be accessed.

Chest in Cloud giant room can not be opened.