Game Options (What Would You Prefer?)

In going through some checks on the NWN2 game difficulty settings, I believe there to be some discrepancies and potential errors in what is being set when changing difficulty settings. I thought I would address this and ask for some feedback on how you would prefer the difficulty settings to reflect game changes. First, here is what the options currently say (and something I would like to keep to as close as possible) … 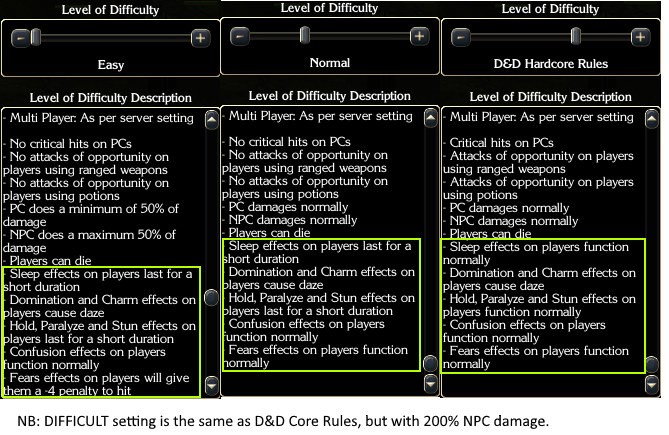 The area I would like to “fix” is around how effects affect PCs according to setting … Here is what I currently have considered, but invite feedback now before I finish it.

SPELL DURATIONS (EG: Sleep): To remain, but would emphasise that other spells are also affected by the difficulty setting as the scripts currently stand. Or, would you prefer durations of other spells to remain unaffected? i.e. Remove the lesser durations that have been implemented alongside sleep? Exceptions: See Hold/Paralyze/Stun below.

DOMINATE & CHARM: As the description says, this alteration affects the player only (and whatever they are currently controlling). Therefore, it is a little misleading. My proposal is to alter it to not distinguish a player’s controlled PC to the rest of the party, but allow difficulty setting to alter the effect across the board as follows:

HOLD/PARALYZE/STUN: (NOTE: Hold and paralyse use the same paralyze effect): This currently reverts such effects to a DAZED effect on EASY difficulty as well as any duration alterations. i.e. It’s not as currently described. Would you prefer the effect to stay the same and alter duration only, or update the description in the options text to reflect it changes the effect?

CONFUSION: The description does not differ, but (as it currently stands) on EASY it actually changes to a DAZED effect. So, change description to explain applying a difference for the setting, or maybe remove from all completely and leave the same for all?

FEAR (FRIGHTENED): Does not appear to be currently setup to work as described. In fact, at my first look, (and if it had been setup as initially intended), it appears it would have made the game more difficult on EASY setting … but I will test further to be sure. However, the point is, would you prefer to have the alternative penalty (of -4 to attacks) rather than the run away as it stands, when on EASY (as it implies in the options text)?

Basically, the options are not working as currently described, and I would like feedback on what you would prefer … which would mean either changing the options text or correcting/amending the scaling scripts.

I certainly intend to keep HCR in place, and I actually have amended some spell scripts to work closer to original D&D spells for that setting.

However, the Options descriptions currently do not make a lot of sense, especially for the “easier settings”. And even in the HCR description, the description is somewhat misleading … and personally, I intend to remove the distinction of checking for a player only receiving a dazed effect, which would make the HCR setting more HCR, if you see what I mean, as even the PCs the player currently possesses will be prone to the dominate and charm effects and not be replaced with the dazed effect, which it currently does.

So, from this perspective, HCR will be made more HCR!

However, what about those settings that relate to NORMAL or EASY? What should they say or do?

The D&D Hardcore Rules option should like the HCR v.2 scripts that work for Nwn1. A fireball launched into a battle should affect everyone in it, not just the monsters.

It has been a while since I did some spell updates, but I just tested a fireball scroll in my own mod (currently set on HCR setting) and the fireball damaged everyone in range including party members. Is this not the case in a normal game anyway then?

i.e. It did damage everyone.

the HCR was close to the AD&D 3.5 pen & paper rule.
Many options such as hunger + thirst + fatigue + food system, bleeding system, death fugue plane, components material for spells, etc.
You have that in the Scroll. Would be nice if the D&D HR option reflected this.

You have that in the Scroll. Would be nice if the D&D HR option reflected this.

But, that’s quite a big change for those who did not appreciate these “fuller rules”. I have some of them in The Scroll, but even they scare a lot of people into not playing it I believe. For example, I think food, exhaustion and the like are proper tactical rules to play (which is why I added them), but from some feedback I have had, not everybody “gets it”.

So, for now, I thought I’d look at those aspects that are presented in the options (which all “understand”) and make sure they work at least.

When I have created NwN 1 modules in the past I have always created them on the game default difficulty. If a player wants combat, etc. to be harder they can always adjust the difficulty to their preference. Most people won’t bother but will drop the module if they think it’s too hard.

Most people won’t bother but will drop the module if they think it’s too hard.

I hear you, but if you read my original post you will see that “dropping the difficulty” may not be doing what people expect … and that’s my point … it seems broken to me, and so I am trying to make it work as expected. E.g. No point selecting “easy” to change the fear level as fas as I can see … but perhaps that’s not the actual case in practice … but the script would imply otherwise. i.e. Having the fear effect on easy will still make you run away and not have the -4 to attack instead as the options imply.

those are just off the top of my head, Lance. You probly know better about which is worse, Stunned or Charmed, for example. The point is to wrap yer mind around all parameters and just do it …

That’s the kind of thing I’m talking about!

Thanks KevL, I think that fits inline with the kind of thing I have in mind.

There is one concern I have and that is how much balance would be affected if I reduce the duration/effect for every PC target, as opposed to just the player controlled target as it currently stands. Thinking …

I don’t know how you’re going to do this. I find it super interesting. Personally, I am also a huge fan of very hardcore rules as @Ariane mentioned but I don’t think it’s what your looking for.

Actually, this isn’t so much about any particular rule set. It’s about fixing what the NWN2 game offers already. In other words, I agree with you that I like the HCR and use it as my default game difficulty setting.

My point is that if any player prefers to play on another setting (by changing the option in the menus as displayed above), then they will NOT always get what is described.

i.e. The Game Difficulty setting option needs “fixing” due to how the scaled scripts have been employed compared to what the description says they do. (See first post.)

However, this project has just taken a step towards needing more consideration, as I am looking at each spell now as well, to consider other scripts involved. How far I get is yet unknown. At the very least, I would like to do these changes to ensure what we have works as described at least.