Gildamesh is outside his inn (NWN:EE, Darkness Over Daggerford)

Possible problem:
Gildamesh is outside of The Black Stone Inn, and not inside.

This is my first time playing Darkness Over Daggerford and I doubt Gildamesh being outside is normal.

The Story:
The first time the party entered The Black Stone Inn, they saw Black Bill standing in front of the bar and figured he was owner of the Inn. There were no other NPCs behind the bar (not even Gildamesh). Turned out Black Bill…err…“just Bill” was a patron. It seemed a little weird there was no owner to be found. The party exited and continued meeting other folks and doing odds and ends.

After exiting the Inn, Gildamesh was not noticed outside.

Later, Gildamesh was seen outside the inn, walking back and forth between the front of the inn and the gate to The Docks

Upon contacting Gildamesh, his conversation seemed to be the normal conversation one would expect from someone behind a bar, including offering to sell drinks.

After speaking with Gildamesh, he walked to the open gate to The Docks and disappeared. Looking closer, Gildamesh was located on top of the town’s wall.

Does anyone see a problem with this?

I don’t know if he provides quests, or if he needs to be inside the inn for some reason.

I’m not sure I can count on finding him walking around town. He may have always been outside. 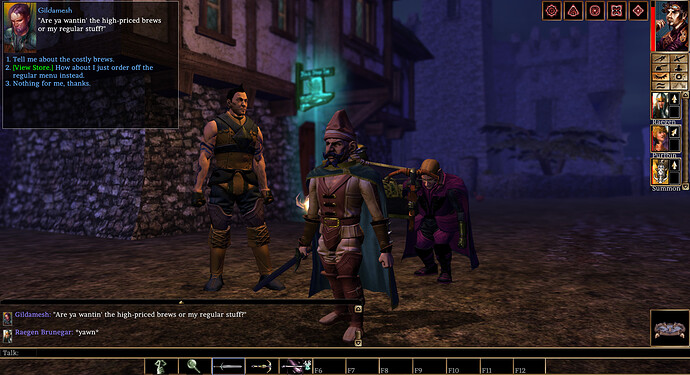 Assuming what you describe isn’t supposed to happen, the first thing to try is starting again without this mod, which is notorious for changing creature behaviour and location, sometimes in a plot-breaking manner.

Darkness Over Daggerford doesn’t use CEP, so that won’t be the problem.

I loaded a save made just prior to Daggerford and reentered the town.

The party headed straight to the Black Stone Inn and found Gildamesh within.

I may or may not start from there.