Has anyone ever worked with these npc activity scripts before?

The option in particular comes from the Ultima Activities, there is an option When set to true will allow the two to work together? I’m having no luck. Has anyone ever used these two before and gotten them to work?

Are there any other NPC based systems out there that has timed scheduled activities? Im looking for something like these two that can work in an all-in-one.

The closest i ever got to get these two to work was to mash’em together into one big script, but there are some conflicts in the NPC’s A.I and they don’t always follow their timed schedules that well.

You should not need to mash anything together. I assume you found and set the

to TRUE? I believe you need to make sure you have tseramed’s script installed as ts_putter. That is don’t rename it to something else.

Also, make sure there are some usable placeables around.

I’ve have not used them both together since I first looked at Carcerians system a few years ago, but I’m pretty sure it worked.

The option in particular comes from the Ultima Activities, there is an option When set to true will allow the two to work together? I’m having no luck.

You can see I am using ts_putter on the hearbeat section 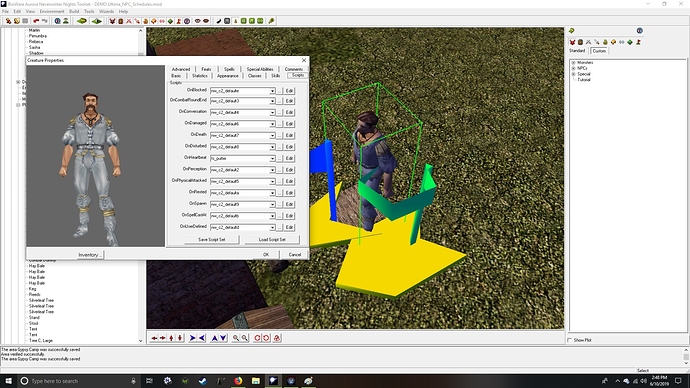 This here is the Ultima Activities set up for the npc to go to a specific location via a timed waypoint. the number 32 represents a simple command of walking to the scheduled waypoint and 14 is sleep 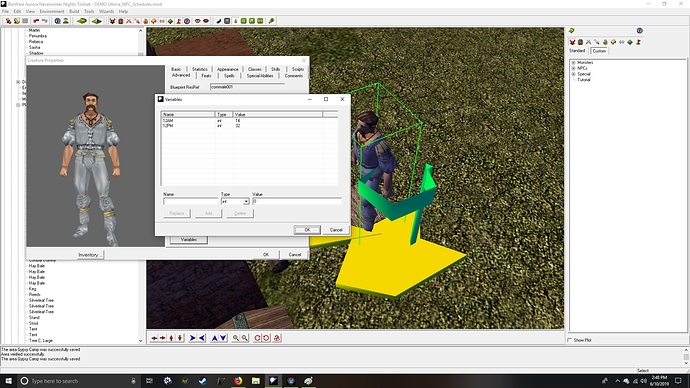 This here is the _actions_inc where the script is set to true, not false so it should be as followed: npc wakes up and then travels to destination, npc putters around inside the home (pictured in screenshots), npc then leaves and goes to sleep outside right?? 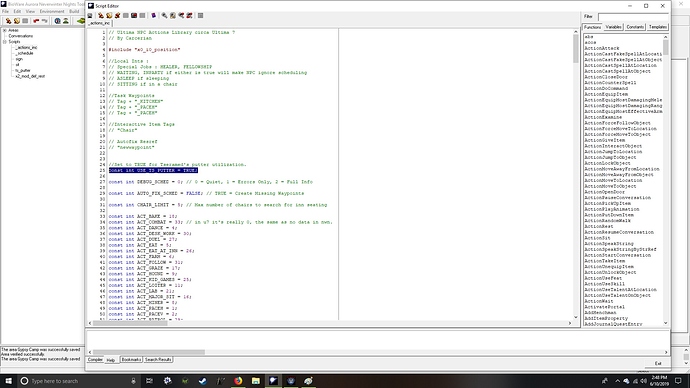 This is what he does instead. he putters around the placeables i put for him so the ts_putter does work yet the ultima system does not seem to work. My only other solution to this is to mash em together, yet that never worked out that well the first time and isnt what the option suggests. 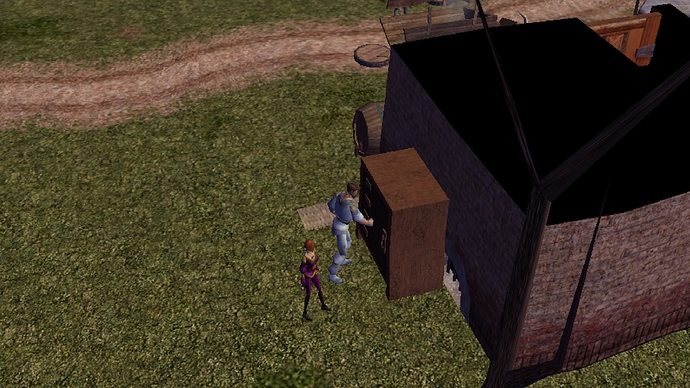 Your “statement” about the option was pretty much a question so I answered it. Note that you ended it with a question mark. I read it as question. So please don’t get all “read the what I wrote” on me. You could have simply said, yeah, I tried setting that to TRUE

You are not supposed to put ts_putter in the HB because that will break the activity scripts. You need to put there whatever carcerian’s system calls for in HB. With the option USE_TS_PUTTER set to TRUE the activity script should take care of calling ts_putter when needed. Otherwise, as you see, all you get is ts_putter.

Anywho, that didnt work. The only script that says to un-option that part is the _action_inc script which isnt designed for HB’s, and just to prove it this is what happened

This is the only script in the Ultima system that states the option for setting it to true, which has been and was also shown in the images above 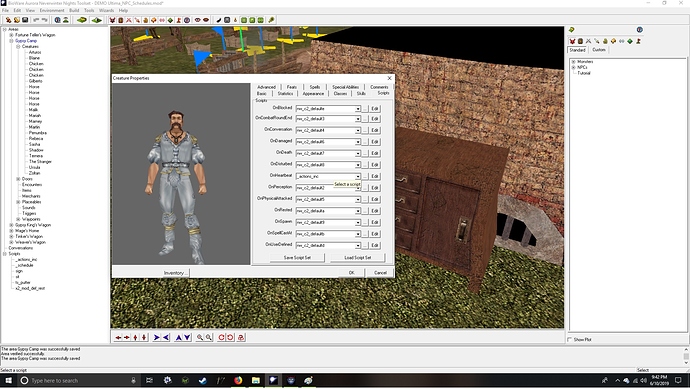 And he doesnt do anything, it wasnt really meant to be used that way so I have no clue.

I think what Carcerian might be suggesting is that the option is used so the two can function independently between each other in a module rather then having the two work at the same time on one NPC, but thats only speculation 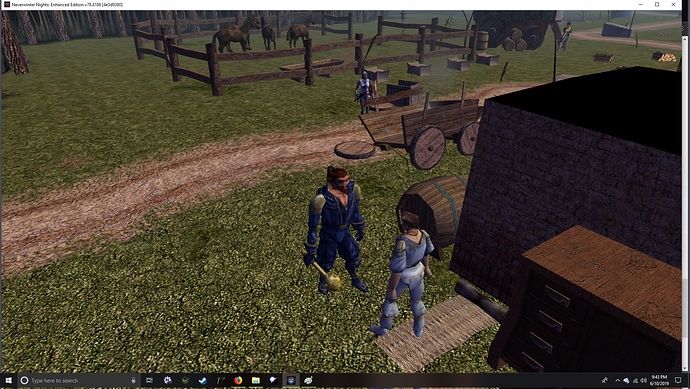 On there own they are both really cool concepts i like the idea that npc’s can walk around in timed scheduled, or putter around and interact with there environment. They each deserve there own praise from the work put into them, but they simply don’y seem to work together shrug

From the documentation in Ultima Activities archive:
…
Directions for use:

From what I can see, you need to have the NPC using task bake (18) or task lab (21) for it to use the putter code. Then it just does if (USE_TS_PUTTER) ExecuteScript(“ts_putter”,NPCWorker); as I thought.

Well it seems to work that way now… now i’m an optimist but i still dont think im convinced about this.

The npc does putter around in the Tseramed Demo Home. He’ll walk around randomly and interact with random objects, however… 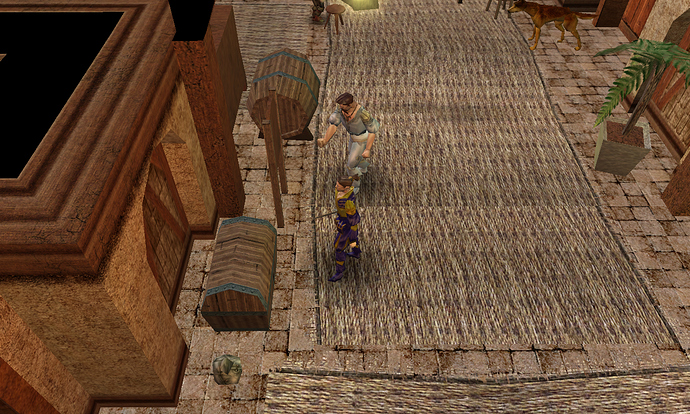 He mostly remains in one spot for about a minute before doing anything. The rest of the Puttering NPC’s are much more active in there puttering than he does, but he does travel between waypoints. I guess its a this for that sort of script option. I’ve never explored this as an option before so im entirely new to the experience in what to expect here. 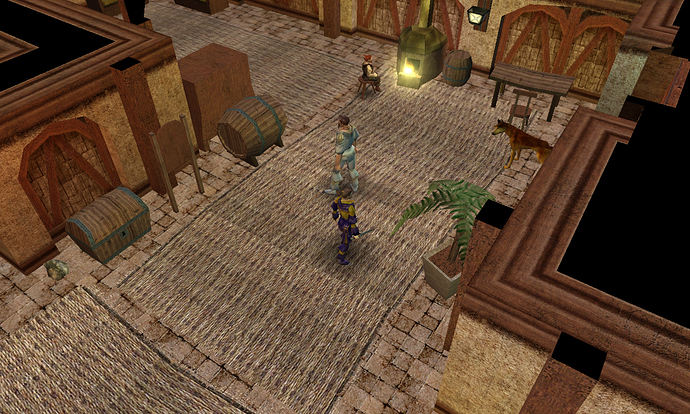 Alright, after some looking around I found the other system I liked and basically does what these two do but all in one

it creates “jobs” for npcs as they do scheduled tasks and will even interact with each other, change outfits, make small talk, sit down, rest, and even has a anti-theft system for whenever the player decides they want to partake in the npcs belonging sooo id say this is one much better!

Okay hehe may change my mind about that system… its really cool but it looks HUGE! Not sure how well it will do in an online server with player’s in terms of performance.

Since you are looking still I’ll take this opportunity to point you at my advanced waypoints system which will do all of what you wanted I think. Including using ts_putter. You can find it here.
It updates the existing walkwaypoints code, while remaining compatible with any waypoints you have already setup for NPCs.

Yeah i know about that system. I use for my Bus Services on my private test server that only me myself and i play on and since Olander didnt include any kind of improved waypoint system that’d let creatures travel beyond a single area. its very isolated for what I use it for, but im kind of leaning towards a system that can react to the Player. I may end up using the NPC script despite its size. it has everything id want, add that to the PRR system and you got some life-like npcs that can get angry if you steal from them or be horrendously mean.