I was some head mdls that look huge. Any trick to scale them?

A clunky method in EE is to have two creatures - one with no head, the other with nothing but a head. Place them in the toolset on exactly the same spot. Using Adjust Location, scale the head (only) and tweak its translation on the axes until it looks OK on the body. Finally, move the head at least 1m away.

In game, before any PC sees the head, apply EffectCutsceneGhost permanently, then jump it to the exact position of the body.

Combat or conversation spoil the illusion, but it’s OK for brief scenes - for example, I have a cutscene where a ghost appears with her head underneath her arm Anne Boleyn stylee.

It looks a nice trick, but what if want to use these heads for players? Blender will scale them in some way?

Extract mdl as text with nwnexplorer and play with scale property.

Seems that the game is smart enough to connect the head with the neck: 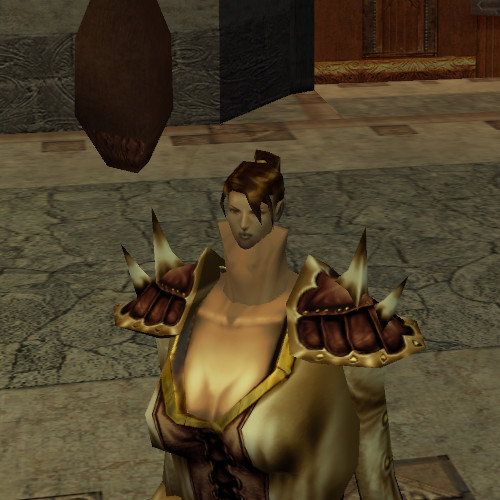 Use NWN Armory. It’s easy to use. If the head is sitting too high, low, forward, backward, etc. then just open up the head in notepad and adjust the position (near the end of the file).

Thanks a lot!!! It’s working great!!! Have I to scaledown both the setanimationscale and the scale?

I’ve resized a couple of dozen heads using NWN Armory and never had to manually change any parameters other than orientation. Those that I did change orientation were almost always when I was giving dwarven heads to half-orcs.

I only changed scale inside model geom section and it seems to do the trick.