I’ve searched for an hour now without finding what I need so I thought I turn to the community again. I’m looking for a placed effect that causes some sort of heat wave in a small space, like the air is fluctuating or something similar. Does anyone know of such an effect, has anyone used anything like that in their modules? In that case can you help tell me what that effect is called and/or where to find it?

andgalf… There’s a hot spring with steam that you can sink down so there aren’t any bubbles visible or you could change the colour of a mushroom haze to clearish using the alpha layer.

I just looked and sinking down the colour pool effect might work too or removing the flashing light parts.

Thanks for the reply, @Tsongo! Do you know what the effect is called? I’ll see if I can find it.

Edit: Ok, found it. It wasn’t quite what I was after but it could work. The weird thing is I believe I have seen this type of effect in the game but I don’t know in which context.

I didn’t quite like how the hot spring looked ingame…

I found something that works…kind of. I have some effects that I found on the vault but…well, this one is called Heroic Aura. What I liked better was Aura of Silence since that was more what I was after, but with that effect you see two circles on the ground (can’t remove that it seems) and I don’t want that.

The effect Portal (Large,Cyan) has the kind of effect I’m after, but I don’t want any of the circles, just the “wobbling” of the air.

If noone has any more suggestions I guess I’ll just have to go with Heroic Aura.

@andgalf have you made a SEF in the VisualEffectsEditor plugin yet? i whipped this up in 5 min, based on what i saw in other sefs …

… but it needs more tweaks

Ok, I’ll go check that out.

@4760 Odd, I can’t seem to find that at all. In which module did you find that? There are many Dark Waters modules for the campaign, and there are a few campaign effects but none by that name…

@kevL_s - No, I haven’t found a need to install the VisualEffectsEditor yet, but maybe now’s the time then.

Edit: Sometimes I hate the search function at the vault. It’s hopeless to find something unless you search for the EXACT right thing. I can’t find the Visual Effects Editor.

Edit 2: Do you mean your viewer plugin, @kevL_s?

Edit 3: This is so darn frustrating. How do I import your heat_shimmer.sef into the Visual Effects Editor (I found the plugin in the toolset, duh)?

I finally managed to import your two files into the toolset, @kevL_s. They are indeed something along the line of what I’m looking for. I’ll see if I can tweak it somehow. I have actually used the Visual Effects Editor before at one time when I worked on my third module. I have no idea what I did back then though. Must have been a year ago I worked on that.

my SefViewer is (very) useful as a browser but not required.

as you found, the Editor is a stock plugin. steps: with the toolset closed, create the .Sef and .Pfx files where the toolset can find them … /override, your /module or /campaign folder, eg.

open the toolset and open the editor plugin. Load the .Sef and also load the .Pfx (each appears in its own tab in the editor)

The .Sef doesn’t need to be modified

with the Pfx-tab selected, its parameters can be edited. after you make any changes, save it then select the Sef-tab and play it …

I think the “particles” of the blurry-dot image need to be grouped tighter somehow – i can look at it again if you want,

I’ve managed to get it into the toolset and my module, and I found your plugin useful for seeing how it looks. I tried editing the pfx file, but since I have no idea what all the parameters do, and I see no screen representation of what I’m changing, so I just change stuff randomly, save and look at it in your viewer. So far I’ve only got the blur to go faster (don’t know what I did), but I need the effect (which I like by the way) to be a bit more subtle. I have no idea how to do that.

Edit: Didn’t see the “Play” button. Ok, now I can at least view results in the Editor. Still, I don’t know what parameters I should be changing.

advanced: about my SefViewer … you can use it to find and view effects that may be similiar to what you want. I like the portal effects … they tend to shimmer

you can then choose DoubleCharacter mode ( in my viewer ) and isolate each effect-event it has, by using the View menu. The events are listed. Hold [Shift] and click one of the listed events … and only that event plays.

i’ll have another look at it, I agree there are many obscure parameters … but after you make one or two effects they get more understandable

Ok, tested what you described and that worked really well. Really good to be able to isolate events like that!

It’s really the exact effect I want, but I still can’t get it to be a bit more subtle and calm, so if you manage to find out what parameters to change to get that I would be really grateful.

EDIT: I think I found something. Now it’s perhaps too subtle. I changed the EndSize to 3;3. Might have to do with 4;4 instead.

EmissionRadius is the size of the overall effect. the “particles” spawn within this radius. Try 0.1
EmissionRadiusVariance is a random delta to above. Try 0.5

SpawnRate is how fast particles spawn. Slow it down to 6

ParticleLifetime is how long they are visible for. Try 0.65
LifeTimeVariance is another random delta. Try 1

Tweak to your taste, the above values should get it more subtle and constrained.

ps. save the .Pfx changes before playing the .Sef (or they don’t catch)

sure, whatever works :) But i notice that other parameters seem to have a better/more noticeable result …

Thanks, @kevL_s! I’ll try with your values and see if it looks better.

EDIT: I think your version looks better overall, however, for my scene in particular, and what I’m trying to convey, I think my version suits better so I’ll keep that. Thanks for all the help!

In which module did you find that? 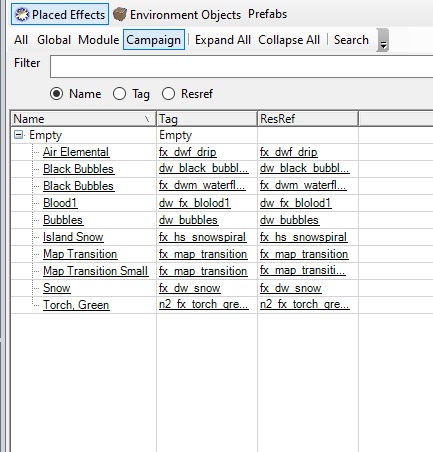 Well, no matter, I think it works the way I have it now.

came across a really good heat shimmer in NWN2_VFX.zip

although large am sure it could be made smaller