I’d like to understand why some body/armor parts do appear in the list of the joined image.
And others only appears as armor parts. 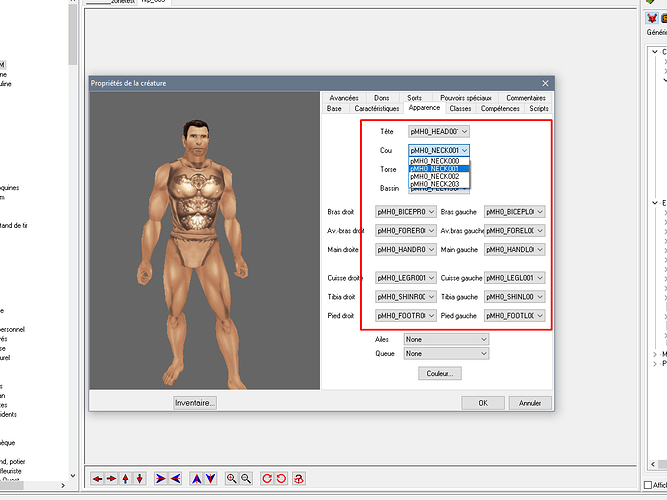 Does someone knows ?
Thanks

They are body parts. Separate from actual worn items.
I think they came from CEP. Why would someone make such a design choice? Maybe because such fake armor gives no AC? IDK

There is a neck203 in core7 of cep. The plt and an entry in parts_neck.2da is missing. I’ll take a note of that.

It’s a scabbard of a greatsword, carried on the back.

Leave the question: What makes the difference between a body part and an armor part?

I guess the question also applies to chest210.

What makes the difference between a body part and an armor part?

If that’s true, you could regard it as a toolset quirk, or a consequence of CEP 2 having a lot of choice.

I don’t think it would be wise for CEP 2 to change it, even if we could, because some existing module might rely on it. It’s just a quirk, which can easily be ignored.

Others may know better.

Thank you guys so much for taking the time to respond !

I’m “glad” to hear it’s a hard-coded phenomena cuz I was going crazy trying to understand how this could work xD
I didn’t mention it but it’s actually under NwnEE and CEP3.
So I guess I’ll just override the buggy ones for me. (Neck203, all Arms parts215)

The naming conventions are seemingly identical. The numbers 0, 1, 2 are imo hardcoded.

But there is obviously a difference. I made a module with core7 only (no top). There are several necks in the hak, but only #203 appears in the toolset. Funny thing.

I’m going to find the texture of this thing somewhere …

There are several necks in the hak, but only #203 appears in the toolset. Funny thing.

If you omit the top hak, you don’t have the custom parts_*.2da files, so the expected result is that no custom parts will appear in the toolset. I guess #203 is appearing because it’s one of the hard-coded magic numbers, for which the core hak provides the model.

The texture is a different matter, of course.

My guess is, every body part model with a numbering above 200 (not sure if including 200) will be available as body part (can be set in the appearance tab) in addition to the numbers 0, 1 and 2.

Looking at Project Q seems to confirm this.

I think there was a ravenloft monster hak that made good use of this feature, adding claws and stuff like that in 200+ range so they could be set on a dynamic model without having to add it to clothing/armor item.

Edit: found the hak I mentioned above: RLCore Denizens of Darkness - Volume One | The Neverwinter Vault