I was trying to see if it was possible to change a couple of the default colours used in the game: I would like to change …

Does anyone know how to do this? Is there a CONSTANT list used anywhere?

Reason: I cannot see them and need to make them more prominent for those who are colour blind like myself.

I have had a thought about possibly just changing the image file used for the first one (if I can locate it and if it works), but the second?

Well, I tried changing the b_overlay.tga, but I obviously do not have the correct “unidentified” overlay. Any ideas anyone?

Oh, I found a nwn2_colors.2da that looks promising. First test failed though.

Although a second test, using existing values in the 2da looks promising.

OK, the first issue has been “fixed”, now just the attribute colour. Anyone?

Hey! I found the answer in the same area, as there was an entry for TextPositive, so now I have my colours fixed! 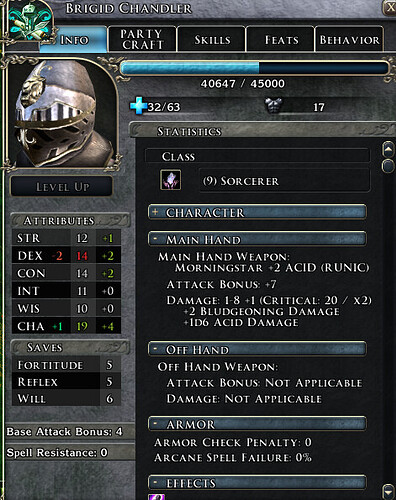 Good to hear you got it sorted but I’m a bit concerned that your Brigid Chandler’s a psyco sorceress in full plate with an acid morningstar !

She gets to test quite a few of my areas because she’s got a light spell and is alphabetically near the top of the list but I don’t think I could trust your version.

Good to hear you got it sorted but I’m a bit concerned that your Brigid Chandler’s a psyco sorceress in full plate with an acid morningstar !

I am used to testing in all manner of ways - as I come more from a DM than a player.

It’s a backup weapon just in case … You see, you cannot guarantee you have access to resting.

Hmmm… That’s what they all say.